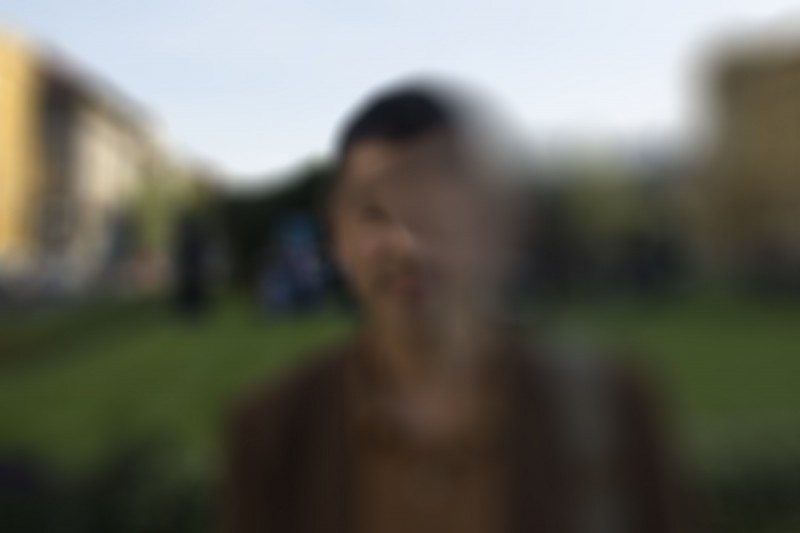 A few months after our interview X let me know that he was uncomfortable with his words, that it was even potentially damaging for his career, especially his openness about his sexual orientation. That is why I blurred his picture and changed his name to X.

‘I’m extremely politically incorrect and anarchistic. But before you know it you have four million offended people chasing you. So I try to adapt, always. I’m a well behaved Zagreb kid.’

X looks at me with a boyish grin on his face. He’s fond of laughing. Sometimes he bursts into laughter, throwing his head back and banging his hand on the small table at a café on the Marshal Tito Square where we’re sitting. He’s an extravert who likes laughter and life. I wouldn’t expect anything else from a Jewish homosexual artist.

X studied Fine Arts in Zagreb, and in A, I and U. His works can be found in collections in Europe and the United States including the U.S. Department of State, World Bank in Washington D.C., the E. L. Ritz Collection in Milwaukee, and numerous private collections. ‘I make art for solely personal reasons. I’m not trying to save humankind, nor am I a holy person. Perhaps I’m a selfish little guy, I don’t know. Sometimes someone comes up to me telling that my work has changed his life. “I saw the fish in your work and my wife says it reminds her of her birthplace!”’ Toni raises his hands laughing. ‘”I’m sorry, it was not on purpose!” I get this very often though, and I’m still selling.’

What is it like to be an artist in Croatia?

‘Like any other minority, artists are not very well settled in Croatia. I wouldn’t say we’re marginalized, but we’re not very socially integrated. In Macedonia of Bulgaria, artists are slightly less pushed aside, but there are a lot fewer artists than in Croatia.’

Why is it that artists are so badly integrated? ‘It’s about rank, really. Croatia is a blue collar society, all about the working man. Agriculture comes second, and the minorities are the non-vital part of society. But when you confront those who are responsible for cultural policy, they treat you like an anarchist.’ Which you are, right? ‘I am, but I’m not letting my mask down in front of them. It ruins your chances of having any social impact.’

You have to be part of it to change it; you can’t afford to be an outsider. ‘Exactly! Unfortunately, a lot of Croatians don’t think that way. No drive to change things, because nothing is really a matter of life and death. Let Vienna rule, let Budapest rule, let Belgrade rule. We Croatians never have the last word and we’re ok with it. We like to stay humble. The writer Miroslav Krleza wrote a fantastic book about this attitude, which is evident in many Eastern European societies. He talked about people not caring about anything, letting life slip away. He was hated for it, his books were forbidden.’ He looks around and points at the pictures on the wall, all of famous Croatian artists: ‘See, his picture is missing – on purpose.’

Because people didn’t like him spitting in their face?

‘Exactly. People hate him even more because he’s part of it, he’s from here. It’s not easy looking in the mirror, and then to spit in your own face. He did it, without mercy. But with a great sense of humor.’

Only 25 years ago your country was at war. It’s hard for me to imagine what that is like, but can you tell me?

‘People were in shock. And they were in denial, even though the front line was only 45 kilometers away from Zagreb. First you deny, like with cancer. First comes shock, then you’re scared and then you deny. If you can afford it. They could afford to, the same way they did in Israel

‘I was here all the time, working. I decided one war for my family is enough, I don’t want to fight. And I was in the theater when they bombed it.’ He points across the square, at the beautiful National Theatre.

‘No, I was working for a theatre for ten years! The bomb fell, and I heard ‘boom’, and I started to shake. But then I knew exactly what to do, because in Israel I saw many bombs. And then I saw the parachutes, which I had never seen before. Many parachutes falling and there was a big plaster bomb, like 400 kilo or something. They exploded it directly above the theatre, it was full of little balls, these small shiny little balls. A lot of people got hurt and seven people were killed. Burning cars, broken windows, you know, it was tough. And then, the siren went off. I was so desperate, it was horrible…’ For the first time during our talk Toni doesn’t laugh.

Let’s talk about Europe. Croatia is the last country to have joined the EU, last year. I heard that a lot of people weren’t happy with is, because it was like giving up their newly won independence too soon.

‘Europe was presented to us in a very biased manner. A lot of people are a-political, but when you are fooled by all the regimes, even the Croatian regimes, it makes you skeptical and less interested in these things. I’m also like that.’

‘Not really. The large majority of the society didn’t have any illusions about this. Croatians are not business people, they’re not ambitious. Croatians are really humble and self-sacrificing. They will sit on this little dusty chair and be happy.’ What do you think? ‘Me, personally, I realized that there was a new pattern of colonization coming. I think they are very clever and cunning colonizers. They create infrastructure – that is, they let the new member countries take care of that. Those countries don’t necessarily want that entire infrastructure; but they need it to function in the European system. So yeah, Europe is definitely colonizing us, but we benefit from it which makes it legitimate and good. They organize our society.’

Is there more cultural exchange between Croatia and the rest of Europe?

‘I hope so, it’s slowly coming. And people don’t even know it. My students asked me what New York was like. So I said to them: “You know what it’s like, you’re practically half-American! You see things on TV, speak the language.” I understand that they want first-hand information, but I think it’s important for them to realize their place in the world.’

They could go to university in Copenhagen now – the borders are open. ‘Exactly. We had these programmes and I tried to stimulate and support them.’ They were not interested? ‘The students were, but the deans were systematically undermining the idea and stopping the students. I really hope this will change. I see a little bit of it and I feel Europe pushing us. The young people want change, but those who are 30 or older…’

X looks at me shakes his head, as if he has just lost all faith in humanity. Croatian humanity, that is.

‘In the Old Testament there’s a story about the “Dor Hamidbar”, the Generation of the Desert. The Jews had to flee from Egypt and ended up in the Sinai desert, where they stayed for forty years. Forty years! Why, you might ask? It’s a distance of only 200 km and with the pharaohs chasing you, it should go even quicker. But no. Moses was born in slavery. He had the slave mentality, not the fighting spirit. A big difference from today’s Israelis. In a way many Croatians are just like that. We’re still “Dor Hamidbar”. It takes time to get over that.’

Last question, X. Is it difficult to be gay in Croatia?

But in Belgrade the gay pride parade this weekend was heavily protected.

‘They’re ten years behind. They’re not less liberal, but they show it more. Their mentality is more steeped in folklore. And they’ve had much tougher history; they fought a lot. There, to fight and attack is legitimate. Here, no. For me it is okay, I’m not beaten here. But I’m not acting out, dressed in pink, walking hand in hand with my boyfriend. Maybe if I were like that I would have a scar or two.’