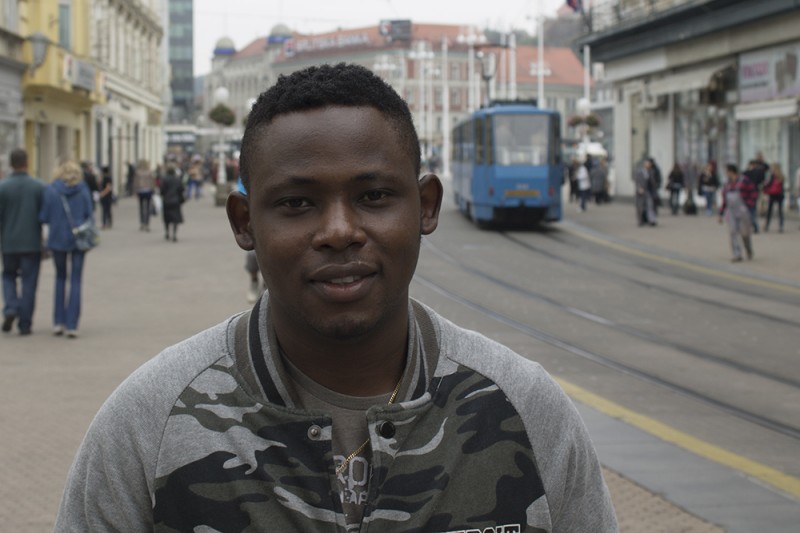 We meet on Jelacica, Zagreb’s main square. ‘Just wait under the clock, and I will pick you up there,’ Rido told me on the phone. I am definitely not the only one who had this conversation. Lots of people stand on the big square, looking around or on their smartphones, waiting for their company. The clock is the place where people meet for a coffee, dinner, or a business meeting. It’s easy to pick out Rido, a tall and African guy: an appearance you don’t see that much on the streets of Zagreb.

The outdoor cafes of Jelacica are busy, as always. ‘People in Croatia only want to meet outside. You never get to see their houses. You can know a person for 10 or 12 years, but you’ll never see his house. They don’t want that familiarity. They don’t want you to know their mother or brothers. You just meet here, for a coffee, or go out together.’ It’s a big difference for Rido, who grew up in Nigeria.

How did you end up in Croatia?

‘I’ve studied psychology in Nigeria, and when I finished school it was a messed up situation. There was no room for me at all to do anything with what I’ve studied, so I wanted to try to do my master’s degree in Europe. I went to an agent who helped my find cheap schools in Europe, and Croatia was the best option. When I came here in 2012, I first had to study the Croatian language.’

So how is your Croatian?

Two years after he arrived in Croatia, Rido is 27, married to a Croatian girl and has a kid.

A lot of responsibility.

‘Yeah, I have just try to live with the situation and see how it goes. I have to make it work. I have to work, more than normal people have to work for it. One of the obstacles that I am having now is the language. When I came here I thought I would find a job, but it’s really complicated. When you go to a job interview, the question always is: ‘If we’re going to hire you, how are you going to talk with people?’ ’

And what is the job that you’d really like to do?

It’s a tough question for Rido. ‘Ehm, I don’t know. Well, it depends. I am a very versatile person you know. I studied psychology, but when I was in school I had a diploma in teacher’s education, in English, in hotel management. I can really do a lot of stuff. And still, I’m think I am going to study information technology. I told my wife that this year, I will start school here. I really got to understand that a certificate or diploma here is more worth than my certificate. You can use it in Europe, in Australia, in the Middle-East.’

When Rido came to Croatia, it hadn’t joined the EU yet.

Do you think joining the EU changed anything in Croatia?

‘I don’t know that much about Croatia before they joined the EU, because a year after I came here they joined the EU. But from what I can see, there is not so much changing. It’s not like after joining the Union, they created 100.000 jobs, or the living standard is much higher. It’s basically still the same. But things just don’t come like that. They are still fresh in the Union, so maybe with time they will get there.

And what about the African Union. How strong is that Union?

‘The African Union is not as strong as the European Union. But I think that is because in Europe, everything is so organised. In Africa, most leaders are greedy and not so organised. But the Africans are more united than the Europeans. We have loads in common. My own African neighbours, Ghana, Togo and the Benin Republic do not differ from Nigeria that much. When I go there, it is like I’m still in Nigeria. There are even places where they speak the same language, and everybody is like, ‘hey bro!’ We are very harmonious people, you know. We are really happy people. My friend doesn’t need to send me a message before he comes to my house. He is always welcome, anytime of the day or night. Like I told you before, here in Croatia I never go to a friend’s house. We just meet for coffee. But in Africa it’s so different. ‘What coffee? I am coming to your house!’ ’

Do you miss that?

‘A total yes, for sure. I miss it loads. I don’t really have friends in Zagreb. I know one good guy from Zagreb, but like I said we just meet for coffee. But I respect that, that is his tradition. I can’t just say, I wanna come to your house. It would be weird for some people. It would be too close. In Africa, people are so free. And that is the one thing that really fascinates me about that continent. You see people that are really poor, but they are happy people. They don’t even know what they are going to eat tomorrow, but you do see the kids running around, playing football, dancing to African music. Being happy. People here who have a job and get paid are not happy. I am 27 years old and I have never seen anyone in my community in Nigeria commit suicide. Never happened. People in Africa would never do that. Nothing would make anybody commit suicide. They have the belief that it’s going to be good, and if it’s not good, it’s destiny. They try to live with they have. People here jump in front of the train or tram because they want to kill themselves over some fucking thing. No. In Nigeria, nothing other than war or disease can kill you.’

‘In five years I can apply for the Croatian nationality. But if I have to give up my Nigerian nationality, I will not take it. So after five years, we will see. Because I am part of them. I have a kid and a wife here.’

Do you feel at home?