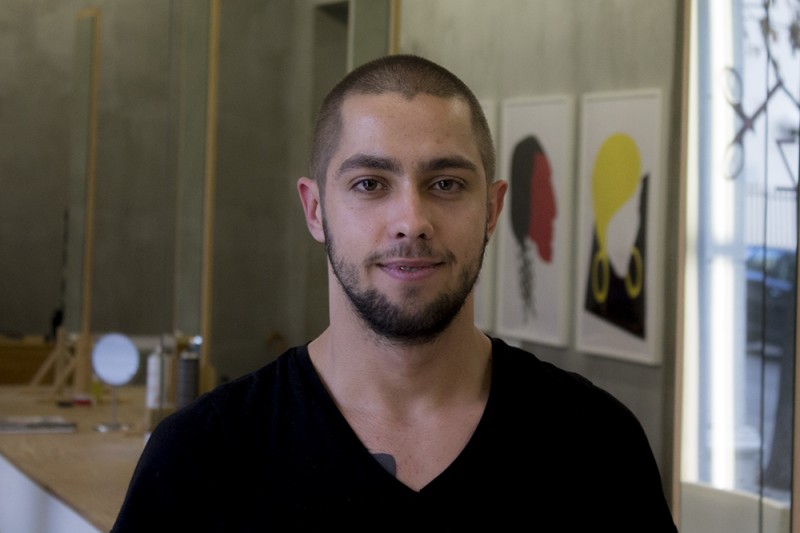 ‘Men are boring, they have boring hair,’ Michal says. His friend Bartek, a former restaurant manager who now works as a translator, and I laugh sheepishly. ‘I can’t be creative with male hair.’ He’s a born hairdresser, who started by cutting the hair of his mom, aunts, and, cousins. ‘Then I went on to learn the trade from my mom’s hairdresser. However, I found that wasn’t the kind of hairdressing I wanted to do, it was too old-fashioned for my taste. So I started practicing with someone else, but I learnt mostly at hairdressing school.’ Michal, 24, now works in one of the trendiest salons in Warsaw. He has thought of taking his talents elsewhere. ‘It would be nice to work in Berlin. I’ve been to Berlin, London, Paris, Spain and the Czech Republic, but compared with other cities, Berlin’s nicely organized. I feel comfortable there, because it’s a city full of young people. And it hosts the best parties in Europe!’

So why aren’t you working in Berlin?

‘I feel that there are still many things left for me to do in Warsaw. I have many ideas to pass onto the people here, so I want to concentrate on working in Warsaw. In Berlin, there are probably a lot of hairdressers, while Warsaw still needs a few good ones. Soon I hope to open my own salon.’

‘It has to be a place where everybody feels right and where people, apart from getting a haircut, can spend their time in a nice way. I’m going to run it from an apartment, so from the beginning there’ll be a different atmosphere. For example, there’s going to be a kitchen where people can get a coffee, beer or wine. So it’ll feel more like they’re at home; they’ll be sitting in the apartment, getting their hair cut, listening to music and drinking something.’

Having seen several big cities in Europe, Michał has noticed there are a lot of differences between countries. ‘Those differences are colossal. In Warsaw, people are still learning about the Western lifestyle. There’s still a huge difference within Poland itself, as well. I was born in 1990, after the fall of communism, so it’s difficult to compare the current situation with how everything used to be. But you can see the differences if you compare Warsaw and the big Polish cities to the other cities and towns.’

What’s so different, then?

‘The outlook on life and the prospects of finding a job and building a career. These factors are different in Poland’s small cities, compared to Warsaw and other big cities in Europe.’

And what about the big differences between Poland and Western European countries?

‘There are two aspects: what the country looks like and how people think and behave. I suspect that very soon the country itself will be quite similar to the Western European countries. But there are still huge differences in terms of how people behave and think. However, after being an EU member for ten years, I’ve noticed how many things have changed and how much the country has developed. The roads and infrastructure are a lot better now, for example.’

Unfortunately, many Poles still feel like they belong to a second-rate European country. ‘Especially the people living in smaller towns don’t want to take advantage of what they could have right now,’ Michał explains. ‘They only complain that what’s going in Poland isn’t right, but they don’t want to try and broaden their horizons.’

Does your generation look at it differently?

‘People my age do have another view. Especially people like myself, who moved from small towns to Warsaw or the other big cities. I’m originally from a little town called Ostróda; I moved to Warsaw six years ago. We don’t want to feel worse than we are, so we’ve changed our way of thinking. I had to fight all the time to achieve this, to become a hairdresser at a young age. A boy becoming a hairdresser was very unusual in my town.’

His being gay also raised some eyebrows in Ostróda. ‘Yeah, my sexual orientation wasn’t understood in my town. But when I finally moved to Warsaw, nobody judged me. I could be myself and didn’t have to hide my lifestyle. In Warsaw, it’s much easier to be gay.’

When he goes to another country, Michał’s still careful around people. Bartek explains: ‘He very often says that, when he goes abroad, people don’t connect him with Poland. For them, it’s usually a nice surprise when they realize he’s a Pole. He believes that people generally think we’re nice, but they often confuse us with Russians. However, when they realize we’re from Poland, they have sympathy for us.’

Bartek also knows why Poles who’ve worked abroad like to drive fancy cars. ‘Especially in Poland, there’s this mentality that you have to show off. So when Poles come back after, for example, building a house in London, they need to buy a car to show all of their neighbors it was worth it. So the car owner isn’t the poor guy who had to work at a construction site somewhere in Great Britain. but right now, he has a big house and a nice car. People just try to compensate.’

I focus my attention on Michał again, asking him what he thinks of Donald Tusk being the president of the European Council. He thinks for a moment. ‘The general idea, of the Polish prime minister becoming one of the most important figures in Europe, gives people a nice feeling. It’s good for Poland.’

What advantages does the EU provide?

‘It’s easier to get to know people. Also, like you said before, I now have the opportunity to go to Berlin in order to work and get to know people there. So to me, those are the biggest advantages. I feel European as well, because I’ve travelled a lot and have many friends from other European countries.’