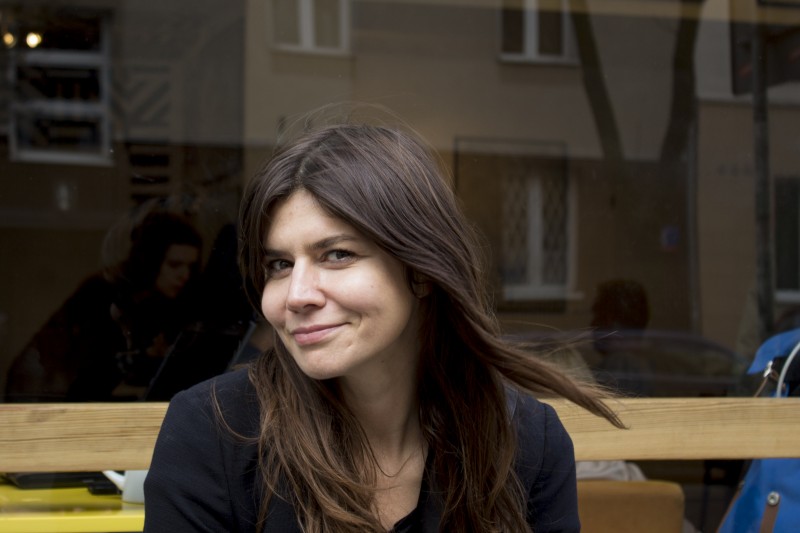 ‘I can live off what I do, fortunately. A lot of my film maker friends are struggling though.’

Malgorzata shrugs her shoulders. ‘They’re too modest. Most of my friends don’t know how to talk to the producers. They’re so eager to make a movie that they’ll take any amount of money and are willing to do the shitty stuff. So the producers will eat you, they don’t have any standards. Because of my many years of travelling I have learned not to take shit and not to work just for money. It’s a waste of time.’

We are in a coffee place in Mokotow, one of Warsaw’s ‘cooler’ neighborhoods. Relaks is the kind of place that looks effortlessly cool. The space is filled with all sorts of vintage furniture, seemingly put together at random, and the walls are covered with Polish film posters. A young bearded guy is working on his laptop, sitting cross-legged in the window frame; perhaps because all the seats are taken by his fellow hipsters, but more probably because it looks nonchalant. A little bit of East Berlin in the West of Warsaw.

Malgorzata is a renowned film maker, although she is more acclaimed outside of Poland than in it. She has made Polish as well as English-language films and has worked together with big names like Juliette Binoche, and has coproduced the movie Antichrist by Lars von Trier. For her film In The Name Of, she won a Teddy award for Best Feature at the 2013 Berlin Film Festival.

‘An average of 200,000 to 300,000 people come to watch my movies, which is a lot for art house movies. Still, I feel like people don’t always trust me’, Malgorzata admits. ‘I’m a woman, a director and I work outside my own country. Conservative people in Poland love everything Polish. They love the big Polish movies, Polish history, Polish TV-programs. All the big box office movies are from here so they always choose the Polish films over the American ones. So naturally, when someone acts too ‘European’, they don’t like it.’

‘No, absolutely not. It really irritates me because they don’t make the effort to do learn about the art society. They should have an eye for people who are exceptional and help them to grow.’ ‘They don’t?’ ‘No, they ignore all distinctions; every artist is the same in their eyes. A friend of mine is an amazing composer; he has won the most important prize in France and gave a huge concert there. Here in Poland, nobody knows him, he’s just one of many. Only the ones who are extremely famous live a happy life.’

In 2004 Poland became part of the European Union. Not a great shock for Malgorzata, who has been travelling the world since the nineties.

A weary smile appears on Malgorzata’s face. ‘Well, I can promise you the half of the society that lives in the countryside is not so proud to be part of the EU; they just sit around drinking and complaining. But I can assure you sixty percent of the people are all for the EU, we’re one of the most pro-EU countries in the EU. But some people are so frustrated; they still can’t find their place in modern Poland. The communist mentality is still very much alive in the heads of my generation. I’m happy I experienced that time, it made me stronger. But some of my friends are still afraid of everything new coming from outside of Poland. Perhaps this is a habit from the time Poland was a locked-up. country.’

‘Maybe being part of the EU means being dominated again; is that what they’re afraid of?’

‘Of course. Polish people, especially the conservative ones, have such a trauma of Europe that they don’t feel part of it. Still to this day, it’s all about suffering. That’s the Polish mentality: “We have to fight, we have to suffer”. It’s martyrdom, really. The younger generation is not like that though, almost sixty percent of them like being part of the EU.’

So what’s the solution for these conservatives? Not to be part of Europe? Malgorzata chuckles and shakes her head. ‘No, it’s a paradox, because they like being part of the EU. It gives them a lot of financial benefits, especially in the agricultural business. Poles are hard workers but they like the benefits, and they will always complain about anything else.’

For a woman of the world, Malgorzata shares quite a few of these Polish traits herself.

‘Are they doing a good job in Brussels?’

I don’t know a lot about it, but in general I don’t trust politicians. To me, it’s the same bullshit. I don’t trust them. I believe in Europe as an abstract idea, with open borders and feeling European. My son can study in another country and feel comfortable there. Not only Polish, but European as well. This is something that touches me, something I dream of. Because Polish people in other countries are treated as ‘Poles’.

‘You mean second rate? Generally Dutch people think Poles are good with their hands, but they also drink a lot. They make good money and then go back to Poland.’

It’s like this everywhere, and it’s not all false. Our economy is getting better but a lot of people here are poorly paid. They can earn more cleaning floors in London they’ll get in Poland. So it’s the circumstances, but also the way Poles are. The inferiority complex, the suffering. Sometimes I feel people here don’t like success; they don’t like someone who is too cool, too successful and too easy going. Even though I think they also bring a more Western style to the Polish province, a good style I think. Many Poles do hard physical jobs around Europe but they’re not appreciated for it. So they come back home with money, but without the pride.’

‘They feel ashamed?’ ‘Yes, and at the same time they compensate by showing off all the goods they’ve bought with the money they made. That’s why it would be good for Poles to be v stamped as Europeans; that being Polish means being European. To be comfortable and normal in Europe.’