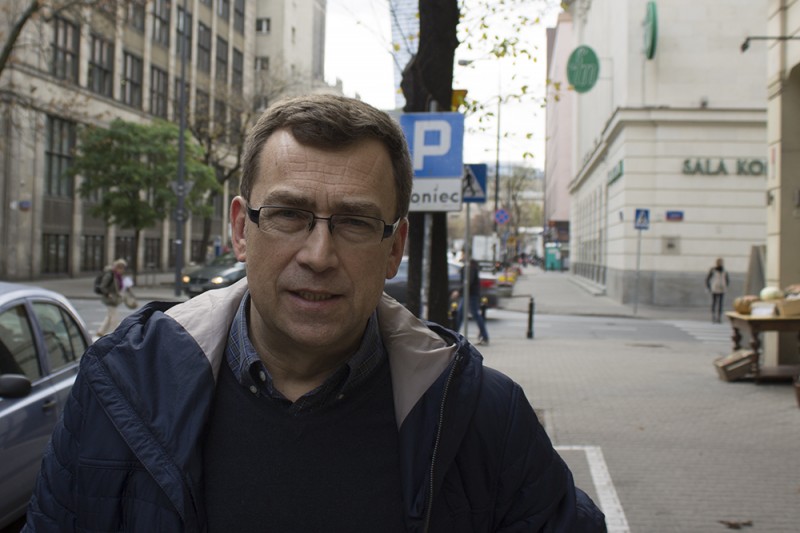 People in Poland watch television for four hours a day on average, which places them at top of the charts in Europe. Another European record goes to Maciej Orlos, the news anchor of ‘Teleexpress’. Orlos has been presenting the news for over 23 years and has an estimated 4 million viewers every day. On top of that he had a role in the Eurovision Song Contest, reading the results for Poland. It is not hard to understand that this man is one of the most familiar faces in Poland.

Despite his widespread fame, Orlos (54) is a humble man. He is tall, friendly and very modest. I met him in a small coffee bar in Warsaw, where I was instantly impressed by his appearance. He is Polish in every possible way, yet perhaps slightly more optimistic than others of his generation. Modesty and optimism are always an attractive combination.

Regarding his part in the Eurovision Song Contest he says: “It was a weird experience. I’m used to doing live programmes, that’s what I have been doing for many years, but this was live not only for Poland, but for millions and millions of people, and it was in English. So I admit it was kind of stressful. I don’t really feel comfortable with all that shouting and enthusiasm. It is not my style.” Although he can be seen on television every day, he is not someone who always wants to be in the spotlight.

What kind of programme do you present?

I am the anchor of a very popular news programme called Teleexpress, which is not a regular news programme. It is partly information, partly entertainment, so we call it infotainment, and people love it. It started in 1986 which is almost 30 years ago. It was a revolution in the Polish media because it was so different. Young people appearing on the programme used normal language, not so stiff, and they smiled and had a sense of humour. Surprisingly, it is still very fast, still has a sense of humour and music, and people still love it. I never thought I would be the host for so many years. People accept me and they don’t want any changes and I think that’s why I am there. Apart from that I have done other things, and I still do other things for television.

But you started out as an actor?

Orlos laughs. I used to be an actor. I graduated from drama school in Warsaw, then I spent some time in London, in LAMDA. And then I switched at some point because I got an offer and I wasn’t doing amazingly well as an actor.

Being a news anchor for over twenty years, you must have seen Poland change quite extensively?

In 1977, when I was 17 years old, I travelled to Western Europe for the first time in my life. I was shocked, I was really shocked. We went to Brussels and then to Paris and I was like “oh my god”. When I came back, I was influenced by the adventure of seeing how it is there and experiencing life there. I always wanted to go back. I saw different people, people dressing differently, people behaving differently, people smiling, people being polite. Everything was different: cars, streets, people, stores. In Poland, we didn’t have anything.

How did the change come about?

The first change came in 1989 when we had the first (partly) free elections, which even a year before had seemed impossible. Then in 2004 we joined the European union, which had also seemed impossible. I had trouble believing it. Surprisingly, when we joined the EU in 2004, I still thought that we were not ready. But it happened, on the first day of May 2004, and on the same day my wife and I went to Paris by plane and it was the first day that we could travel without our passports, with only our Polish IDs. So at the airport we showed our IDs and they smiled and said ‘Welcome’. We were so happy, it was such a new thing.

You have seen a lot of Europe. Do you feel European?

What is causing this change?

Poland is one of the biggest countries in Europe and we have a lot of potential; our economy is growing. Another important thing is that there are so many artists coming to Poland for concerts, like loads of them. That didn’t happen before. It is also the same for films. We have premieres and all of that. Everything is here. I think that for film distributors Poland is quite important, also for the music world, because we are a big market.

I am aware of the fact that I am a citizen of Europe, which is a very small continent, but I am proud of it, because Europe is very special in my opinion. It has a special history and it’s very strong economically. I think that I have a feeling that I am part of the elite of the world. As far as I know, a lot of citizens of the United States think of Europe as ‘elite’. If they want to see really old architecture, they have to travel to Europe. They don’t have Rome or Paris in the States. I think Europe is really fascinating. I have been travelling around Europe, but there are so many places I still haven’t been to and I know that I want to go there. I don’t really need to go anywhere else.

What do you think of Mister Tusk? Will he do well in Brussels?

Well, yes. He has a lot of experience. He knows so many politicians and is one of them. He is competent, and is now working on his English. He is a very good public speaker and I think and I am convinced that he will do very well. He is a very good choice.

Do you think it matters that his English is not up to par?

Maybe he doesn’t need to work on his English, because they use interpreters anyway. I don’t know exactly what the level of his English is, because I’ve never talked to him in English. Maybe I heard him speaking English once. Now it is very different, but for many years – and this applies to his generation too (and we are more or less of the same generation) – we were taught Russian in school, which was useless and we hated it. We couldn’t use it because we didn’t travel to the Soviet Union because the borders were closed (they may have been open, but only in theory). We didn’t have any opportunities to use the Russian language and we didn’t want to learn Russian because we hated the Soviet Union. So, unfortunately, I have to say it was a waste of time all those years when we were forced to learn Russian.