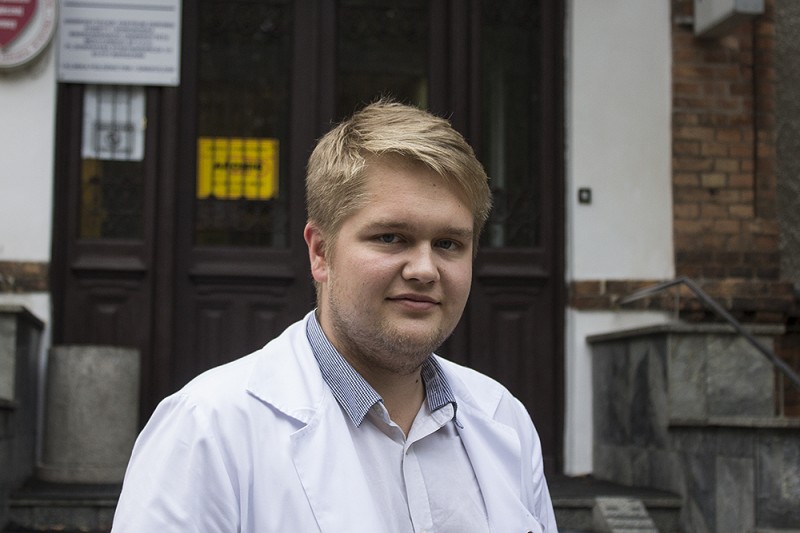 His granddad was a doctor, his parents are both doctors and his sister is a doctor too. That is why Filip (28) is a gynaecologist in training (‘My family is really boring when it comes to choosing professions’). He is a smart guy, as evidenced by his broad interests outside ‘his’ field: he knows a lot of national history and has a pronounced view about the economy.

I met Filip on a Monday afternoon in a small hospital on the east side of Warsaw. He had just completed a 48 (!)-hour shift, but still spoke enthusiastically about his profession.

‘There are not many spots, it’s very popular and as it’s very hard to get in, I work in another hospital as well and decided to do my training for my PhD studies here on voluntary basis. They’re only paying me for the nightshift.’

That sounds like modern slavery: becoming a doctor…is this situation worse than in other European countries?

‘Well, it depends and I do have a choice: I can move to a smaller town or I can switch to another specialization.

But my choice to become a gynaecologist is based on the idea that I’ll be doing what I really like, because I am going to be doing it for the next fifty of sixty years. A small hurdle like money, at the outset cannot influence my choice. I might not be able to do surgery when I am 70 years old but I can teach, I can consult and pass my knowledge on to the residents and the students.’

How would you describe the situation in Poland?

‘We’re still not getting paid as much as we would like. But we have a healthcare system that works like an insurance system in that every Polish citizen pays in 10% of their salary. So basically, if everything is for free, the system can’t work properly because there are a lot of people who come to the doctor for simple things they could treat themselves. Or lonely people who come every week, just to get some attention. That generates queues.’

‘In the Czech Republic they did something to prevent this: they introduced a system that requires the patient to pay a small amount (1 or 2 euro) for a consultation in the walk-in clinic. This little threshold was enough to reduce patient numbers. If something is for free, you don’t value it.’

‘Nowadays, because of the free market the patients are much less appreciative of doctors. Patient demand is high and they already know what treatment they need or what disease they have. Twenty years ago this was unthinkable.’

I guess the patients were more polite to your father or grandfather. I think information found on Internet plays an important large role in the behaviour of the patients nowadays.

‘Personally, I hate patients who walk into my office demanding a prescription for something they have diagnosed themselves. My friend had a situation in which a patient interrupted another consult by shouting for a prescription. I think that is a sign of the time we are living in: Internet and Google has changed a lot for society and also for doctors.’

Could you work in any other city like Lisbon, Athens or Helsinki, starting tomorrow?

‘Yes, of course. I meet a lot of European doctors during conferences; we share knowledge and learn from each other.

We are all very similar; we think the same about most treatments. Although, there are differences: in classes we still use real people instead of simulation centres. I think that is a real advantage, because the core of medicine is the patient, the human being. A lot has been said about the quality of teaching and technical possibilities like e-learning, but the core is the human being. You cannot simulate that with Google glasses, you need to get into an old-fashioned operation theatre just to see how it is done. Just like they did it in the famous painting of Professor Tulp, yes I do know that Dutch paining.

In Poland, students must read and know a lot in order to increase the academic knowledge, even about uncommon diseases. Combined with hands-on skills with real patients. That’s why Polish doctors are highly valued, and it’s easy for us to get a job in Europe.’

Can you describe the change after Poland was ‘free’ again?

‘There have been a lot of changes since we joined the European Union: a lot of money has been invested in new infrastructure and I am very happy with the new buildings and roads. Agriculture has been more highly subsidised than medicine, and I think a proper balance would be more appropriate.’

‘I think it’s an interesting fact. When farmers disagree they take their trucks and lorries and go the city centre and make a lot of noise. A very sick patient who is disabled cannot do the same: he cannot organize huge riots. Besides that: we are not that kind of people; we don’t throw rocks at buildings. The second thing is that doctors are difficult to unite.’

‘The next chief of the European Council is Polish (Tusk), so maybe the money will be divided more equally.’

Do you feel European or Polish?

‘Both, of course I feel Polish. I am European because I am free to go where I want. I see a unity of thinking. Throughout Europe everybody’s thinking more or less the same things: we all want to build something better, live in a nice environment, a better place without conflicts and wars.’

‘For me, it does not mean very much if your name is Hanz, Miquel or Mika. Of course we make jokes about the well-organised Germans, English cuisine or even the Polish, who steal cars. For me it’s just funny, not aggressive or abusive in any way.’

The doctor I spoke to in Zagreb, a nice 73-year-old lady, had been to Berkeley and Johns Hopkins so she was very well trained. She regretted that her Croatian roots meant she always had to prove that she was good at her work. Do you feel the same?

‘I don’t feel that at all. I have to say that it has changed during the past few years because of the science we do. When we go to a conference to present something, our levels of research are very state of the art. For instance: we are doing research in stem cell population in the placenta, which is something that we can be proud of. When we share this, when we explain how we do it and how we perform it, we feel equal.’

She said it was very difficult to get into The Lancet, because she was Croatian.

‘Yeah, of course. I once wrote one paper and they did not publish it but I am sure it had to do with the quality of the paper and not because I am Polish.’

Do you see the younger generation as a group that doesn’t carry the frustration of the past on your back?

‘Exactly, we are like people starting from scratch and for us it is the new reality.

It’s a new reality, which is exactly the same everywhere. The Internet looks the same in Madagascar, New York and in Holland. So we all share the same experiences.’