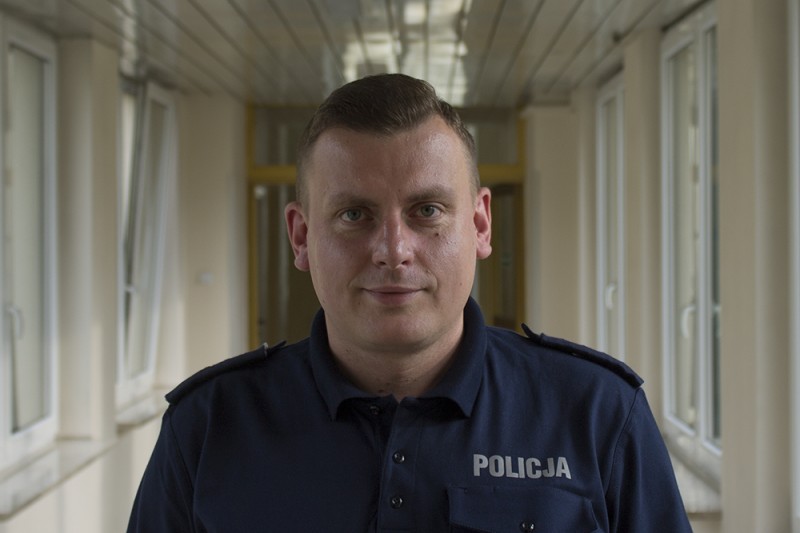 Although he hasn’t spent much time abroad these past few years, Bartosz (35) hasn’t lost his English-speaking skills. Not surprisingly, this traffic officer in the Warsaw police force loves being on the move. However, being the father of a three-year old daughter means he has to stay a bit closer to home nowadays. It hasn’t slowed his progress within the force, though; Bartosz is about to be promoted.

‘I’m a bit in between ranks,’ Bartosz explains when I comment on the four stars on his uniform, ‘but I’m currently a warrant officer. I know a lot of countries use the term “officer” to refer to all policemen, but in Poland, it’s a high rank. Here, you start as a constable. After that comes the rank of sergeant, followed by warrant officer and officer. Just a month ago, I passed the officer’s exam, so I’m waiting to move up in rank now.’

When did you join the police?

‘This year, I’ll complete my fifteenth year of service.’

And as a traffic agent, what does your day usually look like?

‘Well, I’m currently working for a unit which organizes the rest of the traffic police, but I began on the street, checking buses and such. Following that, I patrolled the streets on a motorcycle and afterwards, I became the chief of a patrol squad using cars and motorcycles. That’s how I eventually ended up in this position, which allowed me to become an officer.’

While his promotion certainly looks good on paper, it doesn’t provide Bartosz with a lot of extra money. ‘Our salaries aren’t determined by rank alone,’ he tells me. ‘Let me put it like this: we have different ranks within the police, each with different workplaces and positions. As a warrant officer, you could work on the street, but you could also be the commander of a small unit. So in that sense, your salary’s primarily based on where you work and what you do.’

According to him, it’s important to do different tasks. He still hands out tickets to drivers who are speeding. ‘I still work on the streets sometimes, because my philosophy is that I shouldn’t forget what that work’s like. I think that if you stay too long within one unit it’s easy to lose track of changes in other workplaces. So when I have the chance to work outside, I take it because it’s very refreshing.’

How do people respond when they get a ticket?

‘Well, they haven’t said thank you,’ he laughs. ‘But I think it really depends on how the police treats those drivers. Offering drivers an explanation is very important: there have been several times where I gave someone a maximum fine, after which that person said he understood me and that I was right. Such people realize that they’ve broken the rules and are willing to take responsibility for it.’

There used to be a lot of corruption within the Polish police, how’s the situation now?

‘When I travel around Europe and meet other policemen, we often talk about that. We’ve figured out the reasons for the decline in corruption. First of all, everyone wants to keep their job and it’s easier to lose your job as a policeman than to get it. Besides that, we’ve undergone psychological tests aimed at maintaining our own integrity. There’s a lot of attention directed at that: we screen everyone who wants to become a policeman, in order to see if they could possibly become corrupt. Police work’s good work now: it has a strong position on the Polish labour market, because it provides a lot of career options.’

Talking to international colleagues and learning from them is something Bartosz particularly enjoys. ‘I usually talk to foreign policemen during conferences, but I also briefly joined a patrol in the UK. I drove in a patrol car and we stopped some trucks on a road in London. Thanks to that, I saw we have the same problems. In fact, pretty much all of Europe has the same problem when it comes to traffic safety: people use their phones when they drive, don’t wear seatbelts or they drive after consuming alcohol or drugs.’

Do you see a lot of differences between your police and foreign police forces?

‘I’m the type of person who looks for details. If I see policemen when I’m on holiday, I look at their uniforms and what they do, but in a positive way. So I don’t think that my way would be better or that I don’t like how they work.’

During the 2012 UEFA European Championship, he coordinated the traffic police. Hosting the tournament definitely boosted Poland’s image, according to Bartosz. ‘We had to work almost 24 hours a day for a month, but it was nice to work during such a great sports event.’

He doesn’t regret his country joining the EU, either. ‘Our standards of living are becoming more similar to those of other countries. I can see that because I have family in some of those countries, like Sweden. If you compare the situation in our country in the 90s and now, it’s a really big difference, especially if you see how we grew up. If someone who visited Poland then would come back to see it now, his heart would start beating faster. It’s fantastic now. If you go to Mallorca for a holiday, for example, you’ll see shops like Carrefour and IKEA when you come from the airport. Most things are the same now.’

How did Poland handle that change?

‘We prepared ourselves to join the EU well in advance, so the change was gradual. I think we were already European before joining the EU. It didn’t change my work a lot either: early on, we started working to get the same standard in traffic safety as EU-countries had. I believe Sweden was the first EU-country to start a programme aimed at reducing the number of traffic deaths to zero. Some say that might be unrealistic, but it also creates optimism. It inspires us to aim for that goal, as well. We created similar programmes to reduce the number of traffic deaths. That’s the power of being part of a European union: you can learn from other countries.’

So you really feel European?

In what way is being European different than being, for example, African?

‘Well, I don’t know what the situation in Africa’s like, so I can’t really compare it. If you travel to Africa for several weeks, you still can’t get a good idea about what living there is like. You might see nice things on a holiday there, but you don’t see much of the real African life. That’s why I can say I’m European: because I’ve spent so much time here and have really gotten to know Europe.’