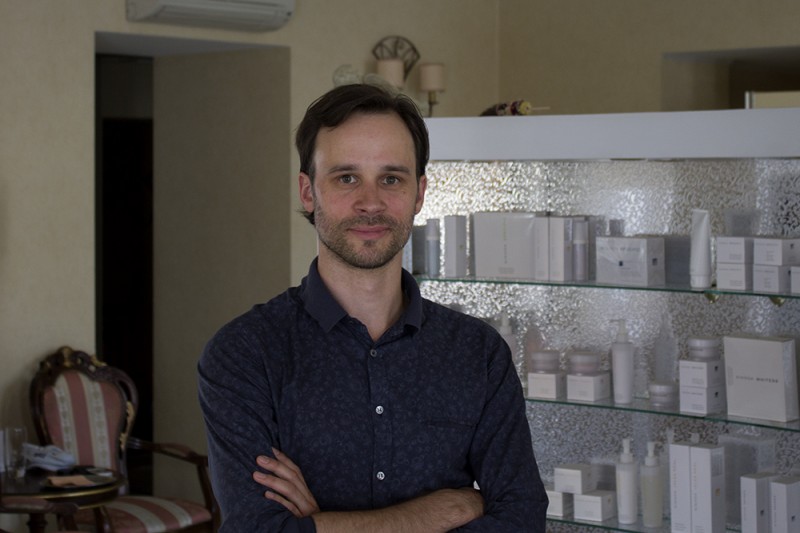 He is probably the most well-educated hairdresser in Vilnius: he has studied agriculture and public administration. He didn’t finish either of them, but is working on the thesis for his master’s degree in economics. Vytas, 36, has been a hairdresser for almost sixteen years now, but it wasn’t a childhood dream for him.

‘It was by accident. In university I met a woman who said that I could be a hairdresser. She thought I might have talent.’

We sit in two antique chairs, three meters away from Vytas’ current customer, a lady in her fifties with bright red hair. ‘She has to wait until the dye has dried; we have 30 minutes to talk.’

‘Yes, I like my job, but maybe I can do more than this. After so many years, I need some challenges.’ Perhaps he’ll open his own hair salon, or do something completely different. ‘Me and my girlfriend are thinking that maybe we should go to another country. To start something new.’

He knows what it is like: he lived in the USA for a year, the country where his grandfather was born. And then for decades, during the Soviet occupation, it was very difficult to travel, but Vytas’ dad, a doctor, was allowed to go to the States. ‘I remember it well,’ Vytas says. ‘There is a picture of him in Mississippi, on a boat, wearing shorts. We lived in a small village, where everybody knew each other, and everybody wanted to see the pictures from America. They were not accustomed to this style of clothes, and other children laughed at me: “Your father is wearing shorts.”

It was difficult to travel and everyone was poor. ‘Shops were empty. Shoes for example: there was just one model, worn by everybody. Or bananas, they were like an exotic dream. Sometimes they came, all green and we had to wait until they were edible.’ The history of Lithuania is complex. Once, in the 17th and 18th centuries, it formed a mighty country, together with Poland. But from 1795 until 1991 it was a part of Russia. ‘Independence made a huge difference,’ Vytas says. ‘Now we are free to travel. And we need this, because the problem is that Lithuania still is angry.’

‘Why is that? Because of the past?’

‘Yes,’ he claims. ‘It is negative. I think it is still the biggest problem in our country. This can be changed by seeing other countries.’ But travelling often results in talented people leaving their homeland. ‘That is not good, but we are young,’ Vytas argues, shrugging apologetically. ‘We can earn money, spend money and we can travel. In this part, where I live, it is okay. But there is another part of the country where people have lower incomes. They cannot travel. So, we need more time and twenty years, then, is not enough.’

Joining the European Union in 2004 has already helped Lithuania a lot. ‘I like Europe, because there is culture, history and here we have all new buildings. They also have helped financially. With projects for schools, roads, hospitals. Of course we have to pay for this, but still, we have a higher standard of living than before. Now, if you want, if you have a good plan, you can borrow money and do something.’ Then he cites Kennedy: ‘Don’t ask what your country can do for you, ask what you can do for your country.’ A Lithuanian dreaming of the American Dream.

The lady with the freshly dyed red hair is starting to get restless. Vytas has to finish her coupe.