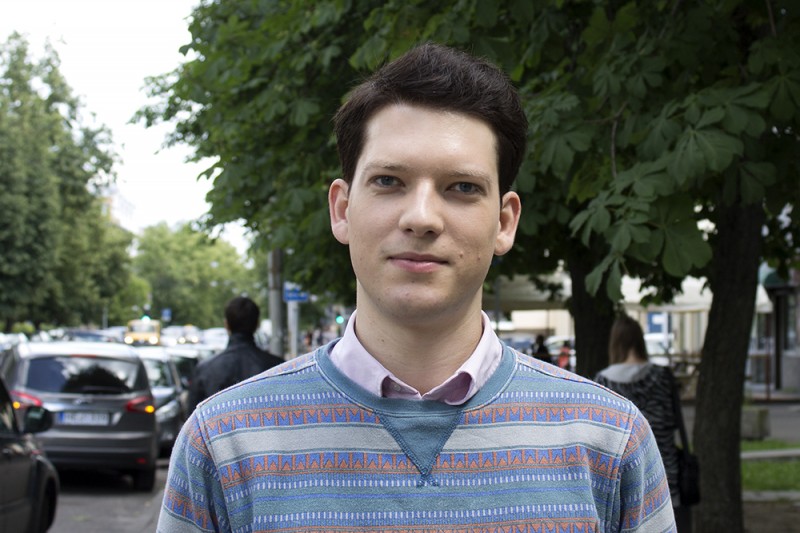 ‘I think I am a bit split between two different roles. Between being an artist and being an activist. And in a way, my films are artistic and based on artistic values. They are not educational or propagandist. But with the attention that I get from those films I am always trying to speak publicly in support of LGBT-rights, reaching out to a bigger audience.’

Romas, a tall, boyish man, speaks thoughtfully with a heavy voice you wouldn’t expect from a 24-year old. He is the kind of person who answers a question with ‘I don’t know’ or ‘I’m not sure’, but then delivers a well-reasoned, intelligent answer.’

Do you think your films have had an effect, have they improve the acceptance of gay people?

‘I hope so, I think that I really pushed for more visibility of LGBT people both by representing them on screen, and by my own persona. Just by being out and talking about it.’

Not hiding, not being ashamed?

‘Yes. I also involved a lot of celebrities in the fight for LGBT-rights, which they never did before in Lithuania. Two famous singers joined We Will Riot, my first feature film in 2013, for example. And there were reality show stars and rappers who became really outspoken. I guess you could say that because I became a celebrity in Lithuania, I have got a connection with them and I was able to push that.’

When you presented We Will Riot at The International Film Festival in Moscow, you openly voiced your support for Pussy Riot. Wasn’t that dangerous?

‘That was fun, maybe it was dangerous, but I don’t think so. They couldn’t do anything, because I was an international guest and they wouldn’t want to create a bigger scandal. At the Moscow festival, it is a paradox. It is a chance for Russia to show how open they are – but only for one night. It is kind of an interesting game. Because when I was accepted at the festival I realised that my film is criticizing Lithuania for being racist, corrupt and homophobic. But of course those problems are much bigger in Russia. But I did not want my film only to be critical of Lithuania, I also wanted to criticize Russia itself for its human rights violations, and of course Pussy Riot was a great symbol of that. It went really, really viral in Russia through social media, Facebook and Vkontakte. It was the first time in my life I read comments like “here is a real man”, he laughs.

Were you happy to read that? To be called ‘a real man’?

We are having lunch at a place outside the city centre. It is rather hip: downstairs they sell Lithuanian-designed products, upstairs, on the mezzanine, there’s a restaurant. The music is cool, there’s a group of hipsters using VAIO-notebooks, and the waitress who brings us our beet soup is wearing at least 15 earrings. And it’s gay-friendly, according to Romas. It’s part of his LGTB-friendly Vilnius-initiative that resulted in a map listing a dozen of gay-friendly bars and cafes.

On your Facebook page I read that that Lithuania is one of the unhappiest places in the world. Did that surprise you?

‘It did, because I live a disconnected life.: I am happy, but I always realise that I am privileged to have an open minded-family. But reading statistics like that shows us that we are not in a very good place. We are third after Syria and Chad, countries that are at war! It’s crazy. There is a lot of negativity in public spirit in Lithuania. And the austerity measures were really harsh. And of course we have a lot of human rights issues.’

More than in other European countries?

‘In terms of homophobia, absolutely. We have one politician who’s truly insane and who says thinks like “Faggots should get out of Lithuania”. I think it’s criminal. We also have this protection of minors law, more or less the same law as they passed in Russia. It was never used, until this last year. But first they banned one of the LGTB pride advertisements from national TV. It was the decision of the national TV commission, but they were basing it on that law, so-called to protect minors. And then recently, there has also been a kind of self-censorship. A university published a children’s book with a few tales of lesbian and gay life. Then someone took it to the journalism commission. They said it should be available only from 14 years old. And then the university decided to ban the book. It is really interesting because this law contravenes European law, which says that everyone should have freedom of information etc. This law definitely has to be changed. But we constantly have new homophobic initiatives so it is difficult.’

Your Facebook page also says that you admit having watched Grease this weekend and that you are fed up with being single.

‘Was it that clear?’

Yes… It is difficult for you to find a boyfriend in Lithuania?

‘Well, I suppose I have some guys interested in me, because I am well known. But at the same time a lot of guys are scared to be seen with me in public. I find it ridiculous.’

Are they afraid being seen with you would blow their cover?

What does Europe mean to you?

‘When we joined the European Union, a lot of things changed. Actually, all of my friends emigrated. Including me. And now many people are returning. I always intended to come back. That was what my We Will Riot was about, also, coming back from a different perspective. Europe opened a lot of opportunities, for example: I have studied in France as a regular student and participated in an exchange program to New York , all for free. These opportunities would of course be impossible without the European Union. Otherwise, I don’t know that much about politics, but I suppose, as a Lithuanian, I stand for a stronger Europe. A Europe that would have an even more powerful foreign policy. It’s a sensitive issue for LGTB-rights activists, because now, under European Union family law, it is left up to individual countries. And it’s an open debate whether it should be that way or whether it could be a European issue. I think if Europe was stronger, people would care more also. Western Europeans may not feel the same, because there is a lot of scepticism. But I am on the opposite side, because I think what Western Europeans don’t realize at times is that although we have a lot of problems in Europe, it also has the most moral societies in the world. It’s a crazy project, but here we value human rights. So it is still better than everything else. I guess I would say I am optimistic about Europe. Although I have to admit that I prefer living in New York.’

New York probably was very welcoming, because everybody is foreign there?

‘Yeah. And everyone is gay.’

‘I guess so. I don’t know, I feel Eastern European. When I lived in Paris I felt Eastern European, but in a bad sense. I felt, not discriminated against, but I felt snobbed. Because French people are nationalistic in a bad way. And when I went to New York I felt European.’