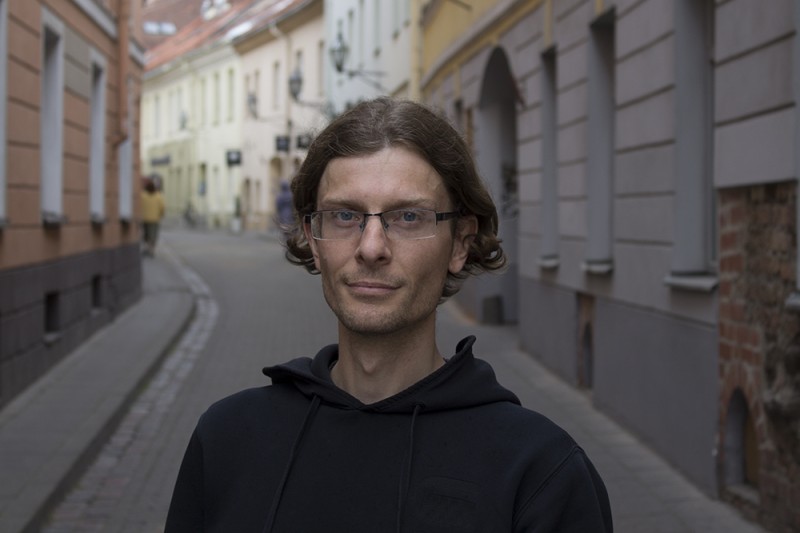 ‘I wrote an open letter to the president. Thanking Lithuania for joining the EU, for giving me a new life. This letter went viral on the Internet, which I didn’t expect. I’m sure one of her advisors saw it: it is a small country and I noticed some important politicians liking and sharing it. And then it was on the front page of a national newspaper with the heading: I would defend Lithuania.’

Do you consider yourself an immigrant?

‘Well, on my Facebook page my occupation is ‘immigrant in Lithuania’. I’m proud of it. I like the idea. Especially since so many British people are negative about immigrants coming to Britain. They are Lithuanian and Polish immigrants and I’ve gone the other way. It’s one of my principles: freedom to move. I think people should mix up – it is good for a country. On the other hand, immigrant… because of this freedom of movement, it is not really immigration anymore: I’ve just changed city. I might well have moved from London to Leeds.’

And like many of the Youropeans I meet, he could fit into several categories: a local celebrity and an artist: he is into digital music, its distribution and support through technology. It’s what brought him to Lithuania: ‘I was invited by many musicians from various countries, I was in contact with them online. I didn’t want to, until someone had asked me so many times to come to Vilnius, and I totally didn’t know what Vilnius was, so it was the most interesting offer; he was the most persistent, so I thought let’s go, let’s get the plane ticket, what could go wrong? And also because they were joining the EU, I thought I could fly out the day before and that would be a cool story and I took my video camera, thinking maybe I can cut a little documentary when I get back. The second day I realised I was falling in love with the place and I was already planning my second trip. Then I stayed for three months and after that I thought it would be a hell of a lot cheaper if I just moved here.’ Mark now has a Lithuanian girlfriend. ‘But the reason for appreciating Vilnius so much wasn’t just the women… You know, I pick up a lot of artists from the airport, foreigners, and the average time it takes them to mention the girls is 15 minutes. Some 30 seconds. It just became a joke.’

We meet at Cozy, a nice restaurant and bar in the heart of Vilnius. Owned by a Dutch guy, another immigrant.

‘I’m one of only 300 British immigrants, officially. The EU country least immigrated to by the British. Least popular or best-kept secret, I’m not sure. It was so easy. The first time I asked for a resident’s permit, they didn’t even have a form. They just didn’t expect people to come. The form was in Russian. They were asking me all kinds of questions, and I said ‘no you have to give me a resident’s permit. I’m not applying for it, I’m telling you to give me one!’

For the Youropeans project I interview two types of immigrants: those from inside and those from outside of the EU. Are there also people from the latter category in Lithuania?

‘Yes, but not many… Especially if you don’t include Russia and Belarus. Some refugees, a few from Afghanistan. Maybe a dozen from Africa. But there is everything. I can imagine UK cities that are more uniform.’

He thinks for a moment.

‘There is a difference with the UK: you can become British. When people come, from wherever, if they stay there for a couple of generations, they’re British. Second generation Pakistani go to the cricket matches; they’ll probably have an accent from the city they live in. They’re British. But you can’t become Lithuanian. Formally I can, if I renounce my British citizenship – but that’s not a good idea, unless Britain leaves the EU. I can’t get dual citizenship – unless the president awards it to me specifically. But informally, even if I got citizenship, even if I have fought in the army, I’d stay foreign. It’s more of a nationalist mentality. Lithuanians of Russian descent will always be called Russian. My girlfriend for example. ‘She’s a Russian’.’

‘Well, yes. Her parents consider themselves Lithuanian, but they know they’re not seen that way by other Lithuanians.’

‘Maybe it’s because Lithuania has lost its sovereignty so many times that the ‘real Lithuanians’ don’t want to accept newcomers. Maybe these outsiders are traitors. If there’s a war, which side will they be on? You know, if everybody did a DNA test, this debate would end immediately. Because nobody is 100% Lithuanian. There is one, a cheap one, but not good enough. And I know a lot of people are gonna do it and the debate will dissolve. It will show the percentage of origin.’

‘In or through the EU I have found a lot of new possibilities. That is because all these countries are in the same zone. I like the concept of the EU and I think that it resembles the idea of the British empire. A fellowship, a commonwealth. The idea that you have different kinds of people and they help one another to develop is a great idea. I think we should have even weaker borders. Ease of movement, even easier than it is now. Diplomas valid everywhere. Work where you want. Pay taxes where your business is based. The presumption that someone is innocent, and hard-working and trying to make a better life is mostly right. And if not, punish him; I’m not saying freedom of action.’