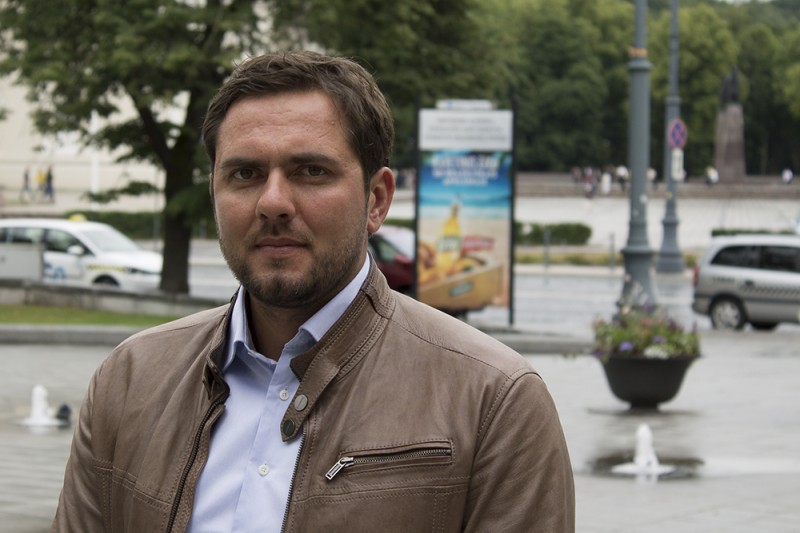 The doctor is ill this morning. Headache, a runny nose, feverish: a serious cold. But he’s a doctor and doctors are responsible people. They show up at their job, an interview in this case. Mantas is an orthopedic trauma surgeon at the Vilnius University Hospital. And of all the doctors I’ve interviewed, he seems the most enthusiastic about his job. While talking about surgical procedures he takes out his phone and shows me pictures of the different kinds of cases he has to handle: a broken clavicle here, a fragmented kneecap there. Being a orthopedic surgeon is a physical job. ‘You have to conquer the strength of the patients muscle. When a bone breaks it goes like this.’

‘How is the quality of public healthcare in Lithuania?’

‘Public healthcare is as good as a private clinic. If you go to a hospital for surgery, you will be treated by a doctor who has done so very often. The only problem is the quality of the facilities. The hospitals are controlled by old managers. When there is a government inspection they only show the parts that are just renovated, while the surgeons are in the operating room working with outdated equipment. Even my car has more instruments. It is a remnant of the old Soviet mentality.’

‘From my own experience I have learned that hospitals are also incredibly cheap. How is that possible?’

‘I have no answer to this. There are no principles involved in this. I do not even know who decides these prices. The only thing it shows is that the doctor will not receive very much for the treatment he has given you. The doctors do not live from their salary, but from the honorario. The thank-you gift the patient gives after he is treated.’

‘In other countries this is not normal at all.’

‘In all post-soviet countries it is. My father, who was a brain surgeon, would earn his month’s salary in one night. It won’t change. People pick their doctor, and if you are good, everyone wants you to treat them. If you are receiving 500 to1000 euro per procedure, without taxes, you do not want to change this system. I do not think it should be this way in a public hospital. The old guys, however, are in charge…’

‘Are you in contact with doctors from other countries?’

‘Yes, we have an online orthopedics group. You can be contacted from anywhere with invitations to seminars or for help on a difficult case. You can post your photos and get advice from everywhere. I love it!’

‘With this international community, has leaving Lithuania been a temptation for you?’

Mantas thinks for some time and then answers: ‘It has not. You know, I’m in the fortunate position that I do not have to make a living from my job alone. My family is financially quite stable and so is my wife’s. I am not running from job to job to make ends meet. I’m quite happy, I can do it from idealism. But when I see how hard some other colleagues have to work, it seems like a battlefield.’

‘That they are on the frontline. They work all night at the emergency ward. They have to help the rude, the drunk, the difficulty cases. It is hell and there is no adequate security. So they have to do it for other reasons. They are motivated by pharmaceutical companies to prescribe their brand of painkillers after the operation for example. It is not always working as a doctor. Sometimes it is just making a living.

‘Have you seen a lot of Europe?’

‘Actually, we’ve been to Amsterdam quite often. It is the place where my wife and I come to unwind. Our way of travelling is that we try to get into the city, into the people’s lives, without the tourist tag on. It’s not really about Europe, just about visiting different places.’

‘About Lithuania’s recent history: would you say that there are two major events in the past 30 years: the Soviet Union dissolving and the country becoming a member of the European Union?’

‘I think it does not make sense to compare those things. Being in the European Union is the only way. With our experience we cannot go on without being in a bigger structure. Part of being in such a structure is that eventually you will have to do things that are not in your direct interest. There is no such thing as win-win. I do not think people could imagine us not being in the European Union. Especially with the ability to be in a different country in a few hours.’

‘When you talk about no win-win, what do you mean with that?’

‘It is in state politics. I do not know how much money we have to pay to the European Union that could have been spent on other things. In the end it does not matter, because I do approve of the way of thinking in this community. Change comes through small things. The cultural things like the city bicycles. Everything comes from people who travel. They saw the Velib-system in Paris and they brought the idea here.’

‘But is it not a problem that all cities will look the same. Everywhere H&M, Zara, McDonalds?’

‘You cannot avoid that. Money is stronger. But if you change they have to change. McDonalds for example is adapting their menus. If people see their products as junk they have to improve their reputation. Every time I pass one I can smell they are getting better.’

‘On the blog of Romas Zabarauskas, one of the other Vilnius-Youropeans, I read that Lithuanian is one of the most unhappy countries. Why is that?’

‘I think it is partly genetic. And it is not that they do not know how to be happy. The problem is with the way they way want to be happy. Materialism is very big here. Happiness is measured by the fact that you can buy your wife a big house or a sports car. It is a culture of getting rich or dying unhappy. So out of unhappiness they turn to alcohol. It is a tradition to relax and to forget by drinking. A stupid tradition, as I see it. Change only comes slowly. The more Lithuanians travel the more exposure they get to another idea of happiness, and this leads to them being healthier. That is partly why I am happy with my job. Helping people to move again. I am glad that I can contribute to society and earn my money doing so.’

And off he is, doctor Mantas, to a new, long day at the hospital, even though he is not feeling well at all. But there’s one advantage of being a doctor, you know what to do: ‘I’ll take some medications and I’ll be fine.’