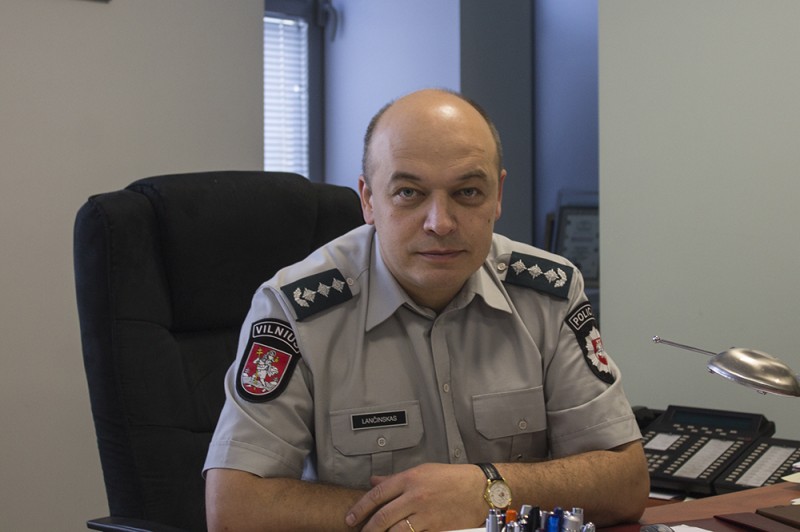 Kestutis looks exactly like what you expect the chief of the Vilnius police force to look like. Here’s a man with authority: a big man wearing a uniform with a lot of stars and stripes, seated at a large desk. The national flag in the corner completes the picture. A policeman now, though he could have been an attorney: he has a degree in criminal law.

‘Why did you join the police?’

‘How were you able to serve your country?’

‘I was involved in all of the changes in the organization since I joined. We have come a long way to become the modern police force that we are today. My previous function as a police officer was concerned with the procedures required for joining the EU. I was involved with the negotiations for chapter 24, justice, freedom and security. In November 1998 I was invited by a member of the Lithuanian accession commission. He asked me if I spoke English. I told them I did.’ Kestutis laughs. ‘Then he told me: “you are responsible for the police negotiations.” So I went, hardly knowing what was expected of me.’

‘What were the issues you were confronted with?’

‘In Brussels I received a long list of criteria which the Lithuanian police had to comply with. We had to change a lot: the police force had to be separated from politics. We also had to implement a lot of standards that guaranteed the protection of data and human rights – it was quite a long list. In those six years, until finally joining in 2004, a lot changed. And it didn’t stop there: even as a member we have to adapt constantly to a changing society. I know quite a lot about the structure of police forces in other small EU countries and they are more or less the same. Strangely enough there is still a lack of trust between police organizations. They may have the same organization, cultures are still very different. Some still think Eastern European organizations are corrupt.’

He seems a bit upset when he says this. ‘We’ve shown many times that we are professionals. We help when we are asked to. Currently we have problems with gangs travelling across borders. My duties end at the Lithuanian border. I have no possibility to arrest our criminals when they operate somewhere else. We can provide information and be part of the investigation team, but we cannot be in charge: that is because the laws between the different member states are too different.

‘So maybe the European police should be stronger?’

‘We have Europol in The Hague. I was a member of its management for five years. From my point of view Europol should be stronger; their mandate is too limited at the moment. Changing that is a political decision however, part of the bigger debate about where national law should end and European law should start. And with 28 different points of view it is very hard to find consensus. But Europol is already doing a good job. It has a coordinating function. We are taking small steps in increasing its efficiency. It is of paramount importance: criminality is becoming more international and more digital. We need measures to combat these threats.’

While talking about police series like CSI -Kestutis does not like them, mainly because they are not realistic-, we get onto the subject of how well the police is liked by Lithuanians. ‘We have satisfaction ratings of around 70%. The police are generally well respected. We always say: society is a client of the police. So we have to provide our service to the citizens. We have our own reality TV police show to give the public a better insight into the work we are doing.’

However, the move towards a service-oriented police forces poses a threat. ‘Of course almost all civilians want to live in peace. But if you look at Ukraine: how should the police react when suddenly there are guys in green combat dress in the street? It is a huge wake up call for the Eastern European countries. The police forces are forgetting how to fight. When you see those kinds of militants you should be able to act. Being friendly and talking will not help you in those situations. There is less and less attention for gun training. Our officers only can use their firearms when their life or that of someone else is threatened. That is too limited. Ukraine shows us the need for a quick and strong reaction force.’

‘Brussels says the EU is a soft power. Do you think it is too soft?’

‘For the last ten years we were thinking that situations like Ukraine could never happen. I think Europe can only survive unified, especially when you look at other big power blocks: the US, China, Russia.’

‘So Europe should be an economic and military power, also something else?’

‘But being united in that way, doesn’t that make you feel European? Does that mean something?’

‘I think there is no reason to be unified on a cultural level. There may be some common understanding. It is more important to remember that we have very big differences on other subjects.

‘That’s the slogan of Brussels right? United in diversity?’

‘I think that covers it. A few months ago, I went to a police chief conference and what I found was that it was really nice to speak and have discussions with other chiefs of police forces. The police in Lisbon had about the same problems as we have. But maybe I could have the same conversation with an agent from Melbourne or Sao Paulo.’