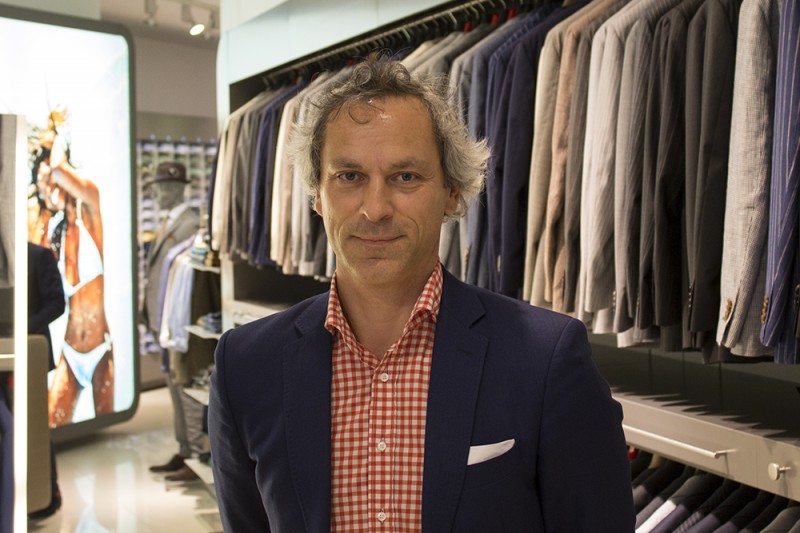 The upscale contemporary shopping mall at Europa Square, just 15 kilometers from the geographical centre of Europe, would look impressive in any country in the world. Office workers arrive in hybrid cars and take the modern escalators up to luxury shops. Entrepreneur and native Lithuanian Gedas is a busy man, but happy to share his story. ‘This will be a symbolic interview about Europeans at the Europa square haha.’

He proudly shows me around his shop, which is part of the international clothing franchise ‘Suitsupply’. During the eight years since it opened, the Vilnius shop has already sold thousands of suits, and because summer is the wedding season it is currently very busy. Gedas, who is himself a sharp dresser, explains that this shop is temporary. ‘We are opening a new shop in the same mall, which is going to be 350m2, so three times bigger. The new shop will reflect Dutch design, as the Netherlands are the mother country of Suitsupply. It will be bold, not boring, but expensive looking to contrast with the price of the suits. It will raise service to a different level, with more fitting rooms and parking spots for spouses.’

How did you and Suitsupply meet?

‘I actually bought my first suit at Suitsupply in Rotterdam while I was working there for Mars. With the cardboard concept it looked like a simple design store, and the quality and price range attracted me. You could get a good fashionable suit made of quality wool for 250 or 300 euros and that really made an impression on me.’

‘Later, when I returned to Vilnius, I needed a suit for a wedding so I went around all the shops in town. Funeral homes sold suits for 100 euros and some stores sold them for 500, 600 euros, but nothing in between that would fit me. It was just too bulky, and there was no choice. Then I looked at the label of the suit I had bought in Rotterdam and called their office. Five minutes later I was speaking to the director himself. One week later he came to Vilnius and one year later he opened a store here. It was a big adventure for the both of us.’

What’s it like to start a business in Lithuania?

‘I believe the biggest obstacle to starting a business in a former Soviet Union country is mentality. For instance the Dutch are businessmen from the moment they are born, because their fathers and grandfathers were businessmen. Whereas in our country twenty years ago there simply were no businessmen at all. There were state-owned enterprises employing people but no entrepreneurs as such. It took me some years before I realized that the world is yours, the opportunities are there, but you have to do something first to earn your wealth.’

‘The government’s attitude has changed as well. If I look back twenty or even five years ago it has become much easier to get their support. The tax authorities have become more professional in collecting more taxes more efficiently. Also government institutions, where you would need to go to get a license, have become more open to discussion with businessmen. There’s still plenty of corruption, but I see huge progress and I think it’s not possible to eradicate corruption in five years or ten years time, or even at all. I believe we are moving in a positive direction, but the speed could be different.’

For businessmen it is never fast enough…

‘I think overall Lithuania is a nice country to start a business, because it’s a pleasant, safe environment for testing. I know experienced IT businessmen, who test their small-scale ideas here, because we have a lot of good IT specialists. If you succeed here you can roll out into the rest of European Union and launch the idea in the US. Suitsupply did a test in the Lithuanian market and look how many shops are open now! We have a handful of stores in the US, and stores opening soon in Italy, Germany, China and the rest of the world. To recognize your potential you have to start small, so why not here.’

My assumption is that although Lithuania is the geographical centre of Europe its citizens don’t feel that way. What do you think?

‘I would say they feel part of the geographical centre rather than the cultural centre of Europe. Having a small, efficient economy enables you to achieve things quicker and faster. There is still a lot to improve, but the speed is much higher in terms of development compared to bigger countries such as Poland or Romania. Ukraine failed to solve the corruption issue and look what they have now. In Lithuania there’s an understanding of where the things might end up if we do not do the right thing. We are aware that for the last three hundred years the aggression always came from the East. Therefore we need to integrate by being part of Europe’s economic centre and adopting the European way of thinking.’

‘Yes, but they have a lot in common. First of all cultural cooperation ensures a longer relationship. Businessmen need to understand not only the needs of the other party, but also where those needs are coming from. On the other hand there has to be bread and butter on a table to enable a cultural chat. With an empty stomach a discussion won’t last long!

Good things are often universal, but differences also apply to the service customers expect. Whereas people in Moscow like to hear how expensive and exclusive the leather of their bag is, Lithuanians enjoy talking about the reason they are buying that suit. How to approach customers needs to be individualized in every market.’

‘Certainly yes. For me being European means the cultural heritage we share. Once you’ve spoken to people from other continents you realize how much common concepts, such as history and communication, you share with Europeans. For example, our sense of what is fashionable has been influenced by the Italians and of what a nice interior is by Scandinavian design. The significant amount of cultural and economic interaction between the European countries will keep them together. I’m a firm believer in a united Europe, because I’m convinced this is where civilization is heading.’