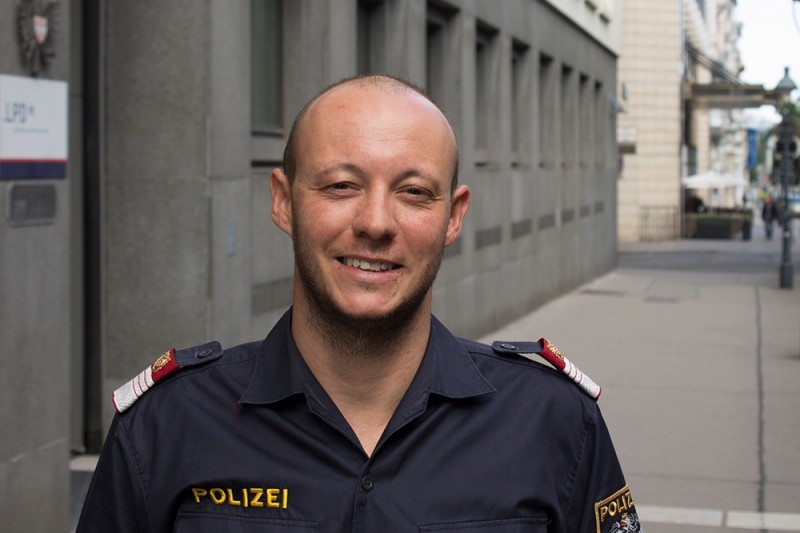 Many Austrian children dream of becoming a football player, but not Patrick. This broad-shouldered officer was more interested in watching Kommissar Rex than in becoming the next striker for Rapid Wien. But his own father was a policeman, and Patrick knew he was destined to join the force.

I can’t help but noticing Patrick’s cold sores. ‘For the picture, you’d have to take it from the right side, because my lip looks horrible,’ he warns. ‘I was at a party two weeks ago and I think I drank from the wrong glass.’ After all, looks matter if you’re a press spokesman for the Viennese police (and he demonstrated just how serious he is about his image, when he returned the picture I had taken of him, neatly photo shopped).

‘During my childhood, there were many Austrian police shows on television,’ he recalls. ‘Seeing those shows might have been a bit of extra inspiration for me; I always wanted to work for the homicide department. I never thought I’d end up as a press spokesman. My first intention was to be a normal officer.’

But you’ve been a street officer as well, right?

‘I’ve worked ten years in Neubau, Vienna’s seventh district. There’s a long street there, called Mariahilfer Straße, where there’s a lot of work to do. So it was a very interesting time, but last year, I started attending a course to become a press spokesman.’

What did you like most about working on the street?

‘The good relations between citizens and officers. One of the positive points is that people don’t think the police are bad. Most of the time, they know we’re there to help them. They also like talking to us. It’s sort of an Austrian mentality: talking to each other every time you go outside. It doesn’t matter if you just talk to somebody or really help somebody, if you get a positive response from the people, I think that’s the best feeling you can get as a policeman.’

When I ask if he’s ever had a negative response from the public, he smiles. ‘During my ten years as a street officer, I didn’t have to give my service number once,’ he proudly declares. ‘Normally, if a person isn’t satisfied with the treatment he receives from you, you have to give him your number. Then he calls the station and says the officer with that number wasn’t good and why that was the case. I don’t know why I never had to give my number, maybe it’s because I always try to understand the people.’

What differences are there between you and foreign colleagues?

‘Looking at the items they carry on their belts in, let’s say Italy, reveals some differences. Some things officers carry abroad we’ve never seen before, we don’t even know what they are in Austria. Our belts are full of equipment, while in Italy they have a single white belt with almost nothing on it. I think it wouldn’t be easy to have that here in Austria.’

According to Patrick, the carabinieri (Italian military police officers) have to rely on their guns alone. ‘They carry nothing else.’ He frowns. ‘No gloves, nothing. When you go to a crime scene and there’s blood on stuff, you need gloves to pick up evidence. I don’t know how you can work without those.’

The American police, however, did manage to impress him. ‘I visited Las Vegas once. It was very interesting to watch the police there, because it’s so different compared to our force. The level of respect in America is unbelievable, with zero tolerance and everything. It was incredible to see how nobody in Las Vegas dared to shoot a mean glance at the officers. You pass by them, they’re always big, heavy men, with a fierce look… For me, that commands respect.’

He does realize that commanding respect isn’t the same as earning it, which is why he prefers the Austrian methods. ‘I’m really a bit proud of Austria. It’s one of the safest countries, we have a great social system and we take care of all our people. I think that’s not something we can take for granted, especially in times like these, when so many countries have such big problems.’

Despite being a proud Austrian, do you feel European as well?

‘Yeah, one hundred percent. I know there’s still a difference between an Austrian, an Italian and a German, but I think some systems, like the euro, have really made some things easier. What we say as the European Union has become more important and I think that, if we stick close together, we can do more.’

I mention several differences I’ve seen between people in Northern and Southern Europe. In the north, I tell him, people work hard, while in the south, they know how to live. When I ask if Austria combines these ways of living, Patrick nods. ‘That’s a good point. Geographically, we’re definitely in the middle, but we also have people who work hard and people who know how to party. I think it’s definitely a mix of those two aspects in Austria. I can’t say whether we’re more like Northern or Southern Europeans, we’re really in between.’

But what makes us all Europeans? When visiting the US, what made you realize you were on a different continent with different people?

‘I see the United States of America as an individual world power. We are also like this in Europe. An American will always say that you’re from Europe, while we’ll always say he’s from America. It’s a form of being together and it’s good that they recognise us as Europeans, which is why I feel European myself. There’s no reason why I shouldn’t: I live here, I was born here and I’m happy here.’