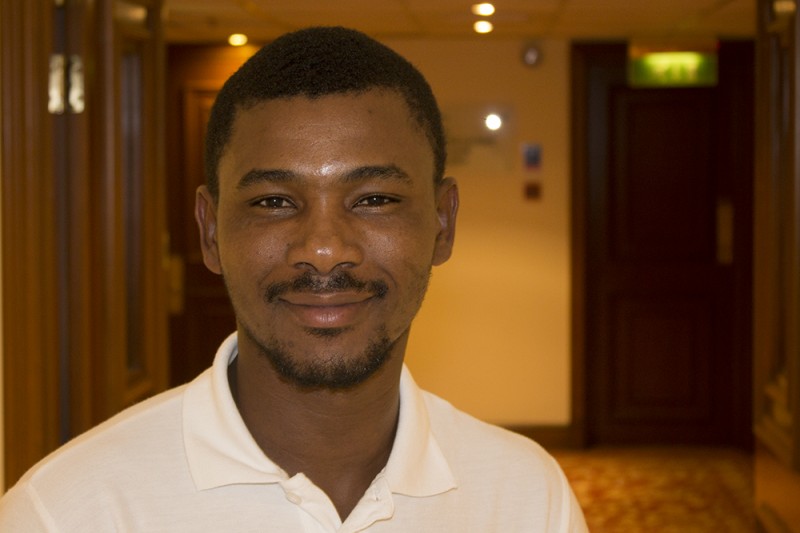 His plan wasn’t to go to Malta, not at all. He had to leave his home country, Zimbabwe, when the Mugabe regime became too dangerous for him. He set out for Libya, but had to leave there when the Gadaffi regime fell. He managed to get on a boat heading for Italy, but never arrived there. ‘The weather was bad and we nearly perished.’ All the immigrants on the boat survived, but the trauma of the experience is etched on his face.

Stephen works full time as a cleaner at the Hilton Hotel. He is also a full-time engineering student, which leaves him little or no time to enjoy himself, relax or even spend much time thinking about his tragic life: ‘I am tired all the time.’ He is alone on the island: his father is dead and his girlfriend lives in Ghana. But at least he is allowed to study, after spending 18 months in a detention centre. ‘I pay taxes, that’s why I can study.’ But it doesn’t mean he has a guarantee of residency in Malta: ‘you need to be here five years before you are granted protection as a citizen. I cannot apply at the moment. So I am trapped here, and can’t leave even if I want to, while they, the government, can decide that I have to leave immediately.’ Stephen describes the process: ‘every six months you need to go to the immigration service and renew your working permit: a yellow card.’ It is a tense moment: this is when they can decide to deport him.

‘Before coming to Europe,’ Stephen explains, ‘my plan was to have the opportunity to learn and to get an education. I wanted that opportunity, to make my life better through education. If I go back to my country, it will give me a better job and a better position to make a better life.’

When I ask Stephen what he thinks of Europe he says that it consists of love. ‘There is love between the member countries. It is a strong union and it supports the citizens from member states: they have opportunities’. It is interesting to note that Stephen feels a connectedness to other African countries, and even has a Ghanaian girlfriend. While in Europe people from Finland and Greece do not feel connected at all. But he says the African Union (AU) doesn’t make sense to him. ‘What is their agenda? They don’t support the citizens and there are no educational strategies. The illiteracy rate is up across the entire continent; about 80% of the African population is illiterate.’ You can hear the anger in Stephens’s voice. ‘For a country to develop you need technology, you need to be educated.’

Malta has a lot of immigrants today, and integration isn’t going very well. There is a big gap between the locals and the migrants.

They are racists, they even admit this themselves. What has your experience been?

‘This is natural,’ argues Stephen. He is religious himself, and he explains the race problem in biblical terms. ‘It was there from the beginning. When God decided to favour the Israelites he was already being racist in a way.’ I’m not completely sure I understand what he means, but I have the impression that fatigue has made him so numb that he’s is just not up to another argument.

‘If I were in the government,’ he says somewhat later, ‘I would ask the citizens what they would do with the foreigners and the immigrants coming in to the country. If the citizens don’t want them we would send them back. But to keep immigrants waiting, often for more than 18 months is disgusting; it is unfair. Don’t let them waste their lives by waiting for that long.’ Then, in a soft voice, he says: ‘I am ashamed that I came this way. It is not a good way. What if I would have died in the Mediterranean Sea? I would have been a stupid man. This will always be a question mark in the future, a touchy subject and a shameful part of my life.’ But Stephen also another way of looking at it. ’It is all part of God’s plan. And some day, things will get better.’