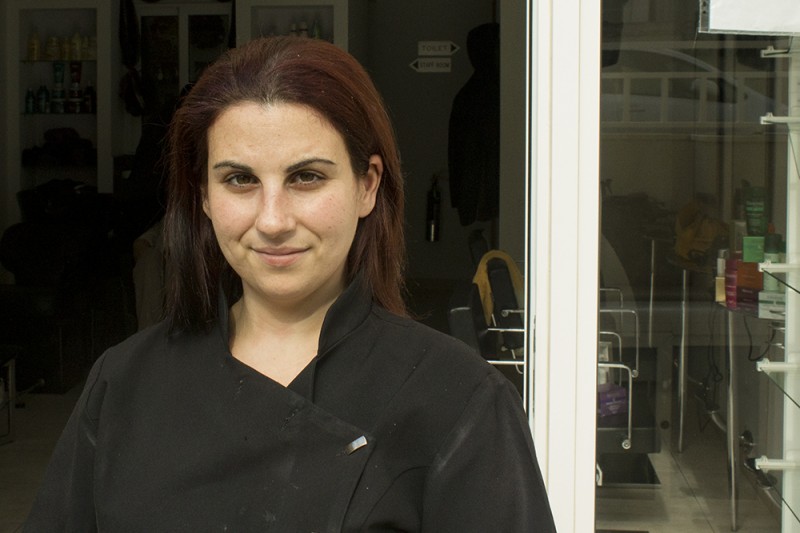 Amanda is definitely the most cheerful hairdresser I have ever met. She looks tough, with her red hair, purple nails and a tattoo on her wrist, but when you talk to her, she comes across a little shy, and she giggles about almost everything. The only thing she is dead serious about is her business. ‘My job is everything. I would never close the shop for a month. It’s my baby.’

The baby is in fact a small hair salon in a basement, a few kilometers outside Valetta, the capital of Malta. Amanda opened her shop three years ago and since then has worked there with her faithful employee Martin. They need to be on top of their game every day to keep the customers coming, because there’s a lot of competition.

‘My landlord just opened a shop next door. Now there are three hairdressers on this street alone.’

Excuse me. Your landlord?

Amanda laughs softly. ‘Yeah. Nothing I can do about it. It’s just another challenge. And a little competition is healthy. It stimulates you to do better. I still feel like I’m in a startup phase, just because I have to be on top of things all the time.’

And do you manage?

‘Yes, it’s not really a problem. There are a lot of hairdressers in Malta, but if you visit in the weekend, they are all booked. Hair is important here. I think because all the women have started working too and they want their hair to look good.’

What’s the biggest challenge for a hairdresser on Malta?

‘It’s very humid here, so hair gets very frizzy, very fast. I went to London once, to get a week of training at Vidal Sassoon, and the techniques were all very different. Even for cutting. Everything changes when you have frizzy hair. That’s why we blow dry a lot here, that’s way more practical and more comfortable for this type of weather.’

Amanda tells me that this is the first interview she has ever done. She looks a bit nervous and sometimes glances up at the Christmas decorations she was putting up (with ornaments by L’Oreal). In the middle of the conversation she mentions to me that she is not originally from Malta.

‘My mother was Australian. She moved to Malta when she was four, but went back when she was eighteen. In Australia she met my father and gave birth to my brother, my sister and me. We came to Malta with the whole family when I was three and a half years old. So I can barely recall anything from before that. If I didn’t have the shop, I would have visited Australia already. I really would like to.’

But she wouldn’t give up her life on Malta for the world. ‘I love the sunny weather here and the fact that we live in a small community. We know all the main politicians and the few criminals that are on the island, so it never escalates. Of course, all people do bad things, but you can’t afford to be extremely bad, because everybody knows you.’

And Amanda is almost the only immigrant on the island.

Do you have a lot of Arabic or African influences here? More than European?

‘People do sometimes think I’m from Africa, because of the language. There are a lot of r’s and g’s in Maltese, so it sounds a little bit Arabic. But no, we are definitely more European. Probably because of the history with Britain.’

When Malta became a member of the EU, did that make a difference for you?

‘Not for me personally. But I think for students it mattered. They can now go study anywhere they like.’

Did you vote in the European elections last May?

‘I’m not sure. I think so.’ Amanda giggles and starts to clap in her hands. I am at a loss to understand what is so amusing, but Amanda quickly explains: ‘To tell you the truth, I don’t know a lot about Europe. I don’t follow the news regularly. I haven’t traveled a lot. And though I would like to go abroad more, I would never leave Malta. I mean, I love it here. The small community, the weather…why would I want to leave? I don’t feel like I have anything in common with someone from Finland, so I don’t really think about it. The older people, who are more interested in politics, they are the ones for whom Europe matters.’

When we reach the end of the interview, Amanda is smiling and laughing a lot, seemingly counting herself lucky to live on such a beautiful island. Her shy side does not resurface until it’s time to take a picture: ‘Oh no, you didn’t tell me that! Can’t you take a picture of Martin?’