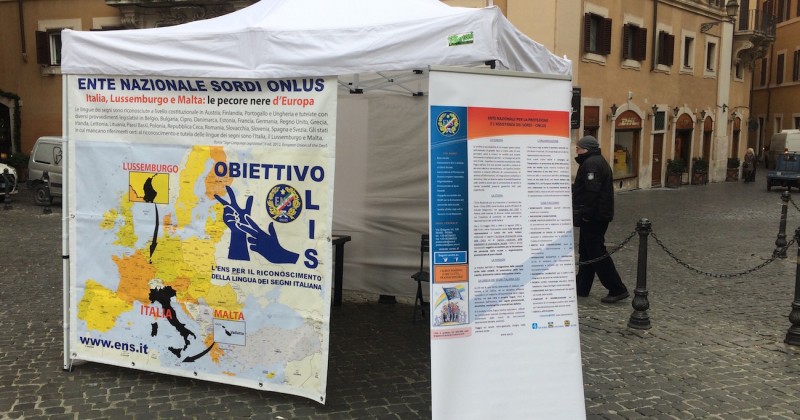 They honk their horns, they speak loudly, play their music just a little too loudly, and there are always street artists performing on the tourist-packed squares. Not a man with a lute or a flute, but with an amplified guitar playing at a volume more suited to Wembley Stadium. The one in front of the Pantheon was playing Pink Floyd, while the guy on the Piazza de Popolo thought he was Guns & Roses.

So if you are unfortunate enough to be deaf, Italy might be the best place for you. It’s quieter and Italians use sign language all day anyway. That is not an opinion shared by the ENS, Italy’s national association of the deaf. They have set up a tent in front of the gates of parliament and are protesting. There’s another tent where two handicapped brothers have been living for the past year, a RAI TV car, and a clutch of reporters: in a few days parliament is due to choose a successor to its 90-year old president Napolitano.

‘We are the black sheep of Europe,’ said a thin man in a jeans jacket. ‘Italy is the only country in Europe that doesn’t officially recognise sign language. Well, neither do Malta and Luxembourg.’ He can hear, his colleague can’t. They try to coax a passing politician into their tent, a vain man who spends his minute with the deaf man scanning the crowd for a more interesting person to talk to, and hoping that the TV cameras won’t capture their good-bye hug.

My dentist Marten is deaf. He is very active in the deaf world, and was, for example, closely involved with the Deaflympics. He told me that sign language is not international, as I had assumed. I was under the impression that a Chinese, a Surinamese and a Finn would all be able to express anger, sadness, the sun and a bird in the same manner. That was a misconception. Sign language is not Pictionary: it’s different in every language, and there are even local dialects, and every language has its own grammatical structure. There have been attempts to develop a kind of deaf Esperato, Gestuno. It was not a success, but there is hope. The increasing level of contact among deaf communities in Europe has given rise to a new language: Eurosigns. Wouldn’t it be great if street artists could be taught to use this language to perform Nirvana’s Smells Like Teen Spirit?