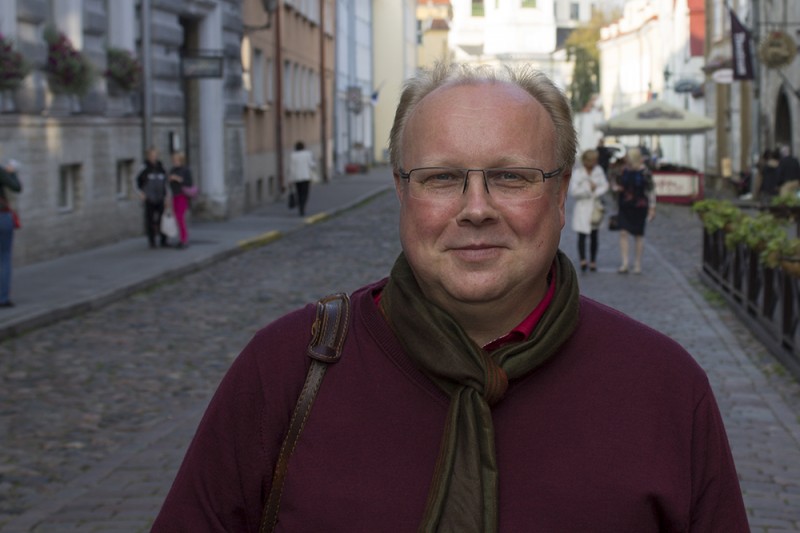 1 spoon of honey
1 spoon of butter
2 spoons of rum
Light it and let it burn for 5 minutes.
Drink it and you’re well again. This is what doctor Toomas prescribes for me when he notices during the interview that I have a slight cough.

‘Here, for you,’ the doctor says, handing me a bottle of cognac – he’s a member of an Estonian cognac club. ‘Next February, we celebrate our fifteenth anniversary,’ he proudly announces. After sitting down at a table, I ask him what kind of doctor he is. ‘By training, I’m an ordinary doctor. I mostly work at an emergency station, but I also do a lot of stuff in my clinic. It started fifteen years ago, working from a Swedish clinic. Now we have five different, small centres: two here in Tallinn, the rest in other parts of Estonia.’

That’s not all he does, though. ‘After I graduated, I found my first job at one of the University of Tallinn’s laboratories. Afterwards, I gave lectures about anatomy and physiology for some years, followed by teaching microbiology and development biology. Now I’m teaching occupational psychology to master’s degree students.’

‘I wanted to be a doctor since my childhood,’ he recalls, ‘it’s an interesting path to take.’ Considering how long he studied, he’s a real egghead. ‘I spent ten years at the University of Tartu and one year at the University of Helsinki. A few years after that, I studied in Norway, at the University of Bergen. I also followed different courses in Scotland, Austria and the Netherlands, at the Maritime Institute on Terschelling, to become a ship doctor.’

Did you see any differences between doctors while you were abroad?

‘I think things are quite similar when it comes to doctors. I spent a month at the University of California, because there was an HIV-project. There, I met eight persons from different countries. It was very strange: I could immediately identify all these persons, coming from the Philippines and other places, as doctors.’

While I wonder if doctors are recognizable from their serious look, I realize Toomas doesn’t look serious at all. ‘I think it’s the glasses which make me a doctor,’ he jokes, ‘But I’ve seen that, while speaking at conferences around the world, doctors are similar to one another. A lot of Estonians work in Finland, Sweden, Norway and the UK as well. Maybe it’s because we’re equal within our field. In our clinic, we get a lot of patients from outside Estonia, such as Finnish, Swedish and Dutch people. We also get a lot of ambassadors.’

Perhaps that’s because his clinic can get patients’ test results faster than public hospitals. ‘It occasionally surprises our patients; they usually have to wait ten minutes for the results of a blood test, while they’re used to a week. Some of them need an X-ray scan or an ultrasound stomach examination, we can do that within a few days.’

Tomaas studied during the end of the Soviet era, and his early days as a doctor were a period of great change. ‘Russian medical books are sometimes more specific, compared to the ones from the UK,’ Toomas says, taking a sip of his coffee. ‘We also had some old Finnish medical books, sent by the University of Helsinki to the university library in Tartu. So we had the possibility of reading very diverse literature. I finished university the same year Estonia gained its freedom. My fellow students and I were the first to get degrees written in the Estonian language. That year the currency was changed to the Estonian Kroon as well.’

Did you learn a lot languages from reading different medical textbooks?

Thirteen years after its independence, Estonia joined the EU. ‘I think it was quite a logical step, the youngest generation was ready for it,’ Toomas recalls. ‘You can travel freely due to the Schengen system. I’m happy about that. Not to mention that you no longer have to calculate differences between the kroon and euro. I think we also know a little bit more about all the countries in the EU. We don’t only see differences now, but similarities, too. We’re becoming more equal to each other, but at the same time, every country has its speciality.’

‘Yeah, I do. I was waiting for the EU membership and I’m happy with it. Those closed borders are finally open now. I like to go on holiday every year and, every two years, I visit a French cognac region with the cognac club. Being European means you can befriend people from countries such as France, the UK or the Netherlands, because it’s relatively easy to be together. You are able to go everywhere.’ Suddenly, his voice becomes earnest. ‘You know, I’ve been thinking of moving to Spain, to a town called La Marina, in about fifteen years from now. I have a little apartment in downtown Tallinn, maybe I’ll sell my house outside of the city and buy a small house in La Marina. That way, I’ll still have a place here to spend the summertime.’

But people in the US can live in two states as well, I tell him. ‘Of course, but I think we have larger cultural differences within Europe, when compared to the US. We should keep our traditions, but we need to work towards something and look ahead as well. I think we’re developing step by step.’

Toomas seems to have a remarkable faith in European politicians. Which isn’t unusual for Estonians, he explains: ‘In Estonia, we elect the best representatives. We’re a small country, so we know each other well. When we know who we choose, we don’t make bad choices.’ He names Andrus Ansip (the former prime minister, who will become the next Estonian European Commissioner) as an example. It turns out Toomas knows him from his university days: ‘We met in a laboratory. He was a few years older than me. He studied chemistry and was a very good sportsman.’

EU regulations aren’t a problem for him, either. ‘For a doctor’s job, they’re good, because they provide a clear treatment standard. For example, if a patient’s coming from the UK or the Netherlands, I can understand why he’s using certain medicines. I don’t know a lot about other regulations, it seems unnecessary to create rules about how big potatoes have to be or something. But sometimes, we need standardization.’