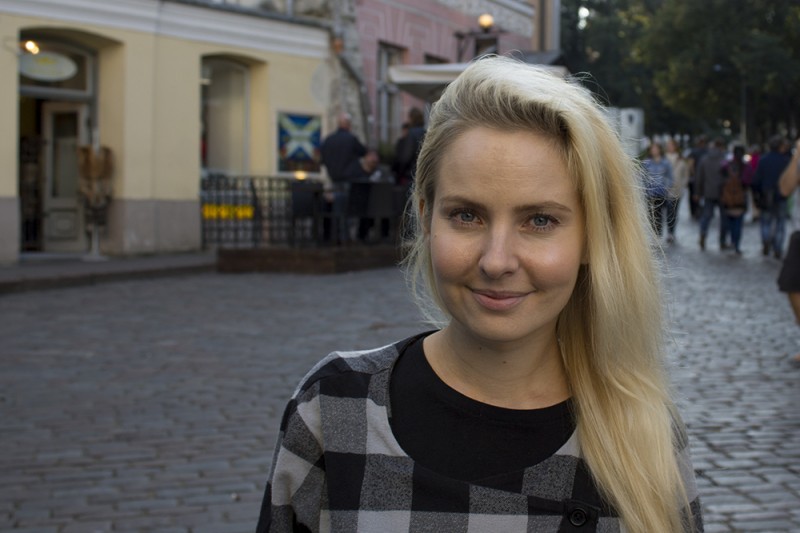 Four Estonian girls representing Switzerland in the Eurovision Song Contest? It happened to Vanilla Ninja, an Estonian female band that had been very successful in Germany, Austria and Switzerland. Apparently the Swiss are good at skiing, tennis and making clocks, but not at singing: in 1988 they had to ask Celine Dion to sing for them, and in 2005 Vanilla Ninja climbed onto the stage to defend Switzerland’s honour with their song Cool Vibes. The lovely Piret Järvis was one them. No longer a Ninja, she now kicks ass at the Estonian TV, as a presenter and editor.

Are you still performing with Vanilla Ninja?

‘No. We did our last show in 2009. And for the moment I like it that way. When you are a fulltime musician in a band, you are always under pressure to stay relevant. You are expected to produce at least one album a year but in the end this kills the creativity. Plus you have to be in the picture all the time. That was the worst for me because fame has its downside. Stalkers, for example, one of the worst was a guy who believed he was my father. He was showing my picture around and telling everyone: “Look, I’m her father!”

Piret laughs, clearly amused by the ridiculousness of this story. It’s a quiet Sunday afternoon, and we’re sitting in a nice and slightly alternative café in Tallinn. Piret’s boyfriend is sitting next to her, sipping on his beer, hoping it will help him get rid of last night’s hangover.

‘It’s okay now. We don’t have a paparazzi culture in Estonia, so people don’t really bother me anymore. I still make music now and then with a band that consists of my friends. It´s called Küttebänd. But we perform very rarely, which helps to maintain the fun and helps to keep the creativity going.’

You made an unusual career switch, from a member of a girl band to a serious journalist. How did you pull that off?

Piret shrugs. ‘Well, it might seem weird to you, but for me, it was pretty normal,’ she says. ‘I started to study journalism at the university in the same year we formed the band. So for me, it´s a logical step.’

But is that the same to the people around you? Do they take you seriously?

‘The people I work with do. And that’s the most important. If there are people who find it strange and don’t want to listen to my reports, because I’ve been in a girl band, well… that’s fine by me. But I don’t really think that is the case.’

And what kind of stories do you report on?

‘I try to focus on entertainment and the softer stories, but I also work on investigative stories with my colleagues. We have a really high level of quality journalism here,’ Piret says. ‘The people I work with are really strong journalists, who serve their role as watchdog well, and regularly bring down somebody for corruption, for example. It’s the way journalism should be.’

The tension between Ukraine and Russia must have been a big topic in the news, it has become quite important in Eastern Europe this year. Is it a big thing in Estonia now?

‘Yes, of course, because we are scared. We are all scared, because we are so close to the danger, to Russia. But not all countries in Eastern Europe are in the same situation. It depends how close you are to this superpower.’ A few words are exchanged in Estonian. ‘Also, there’s a lot of Russians living in Estonia, compared to almost none in Romania. I think that matters.’

You travelled a lot across Europe for your music. What are some of the things that all European countries have in common?

‘The first thing that comes to mind, besides the shared currency, democracy and constitutional law, is that all of the European countries have such a rich history. For example, the Middle Ages are still very present everywhere. And I mean the architecture here, because you do not see such amazing old towns in the United States for example. Those are some of the common things. But I think its easier to say that we are yet so different.’ Piret leans down on the table, recalling her years of travel. ‘In the north, people are more laid back, more introvert. And the more south you go, the more open people will be. This is affected by the climate, I think. When it’s cold on the streets and there’s not a lot of light during the day, you´d rather stay inside your house, covered in blankets and not communicate with anyone.’ Also time has a different meaning in north and south, in the south people seem to worry less.

Do you feel European in spite of all these differences?

‘I do. And actually, I’m really proud to be European. Because, very much like living in Estonia, it means being part of a small and distinct society. It feels special, because, compared to Asia or Africa, there are so few of us. You feel this identity more strongly when you’re outside Europe. Europeans suddenly stick together.’

Piret’s boyfriend weighs in on the conversation, pointing out that Africa has 1.1 billion inhabitants, compared to half a billion in Europe. Is it possible to form a union with people who are all so different?

‘That is the question. I think it’s good that we at least try. Although there are some pretty stupid, quite pointless, rules. Like when the EU wanted to forbid peppermint from regular stores, because they said it was a drug. Or when they wanted to regulate the curve of the banana.’ Piret laughs. ‘I’m not even sure whether that last one is real or imaginary. I say, let’s see the positive side of these rules: they make us laugh.’

But not all people see it that way, right?

‘No, there are some people here who are really mad at the EU. Not because of those rules, but because of the monetary funds that require us to help Greece for example. I mean, they couldn´t manage their finances, were living way beyond their means, and then a small and a rather poor country like Estonia has to help them? We don’t even have money ourselves, how is it possible that we have to lend money to richer countries to help them? Because of this, I’m not sure how popular European Union is in Estonia at the moment. But personally, I think we´ve gained more than we lost.’

Is the Eurovision Song Contest something we’ve gained? Do you think it unites Europe?

‘At least for one evening, because everybody is watching it. Although we all find it a bit silly, and even when you’re inside it, it is still kind of funny. You see so many different types of people there, who are all Europeans. And maybe that is what Europe really is: all these different people. Of course, the Eurovision is a bit more glamorous than everyday life. But I believe it is necessary. In a strange way, it is one of the very few things that really unites us. And at the end of the night, it is entertaining. And having smiles on our faces because of it cannot be a bad thing.’