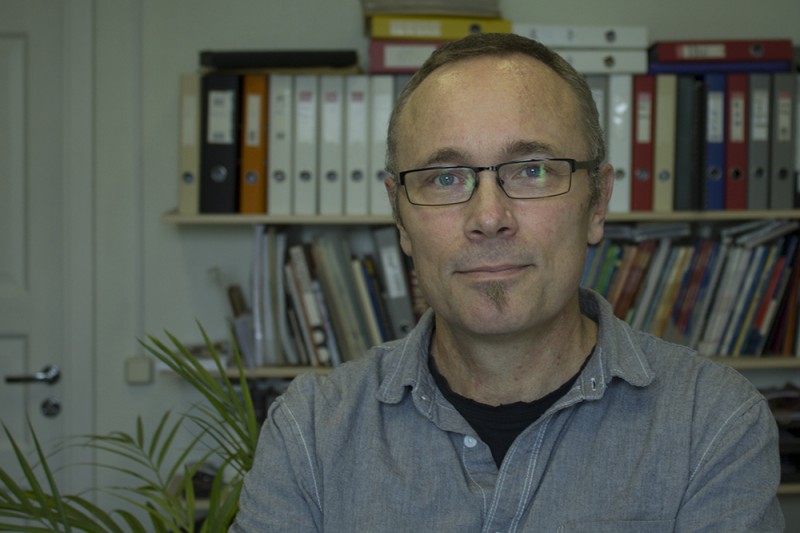 If you ever go to a concert hall in Tallinn, you may notice that the English voice warning you to turn off your phone has an Australian accent. You wouldn’t be mistaken: Michael, an immigrant from Down Under, does several voice-overs in Estonia. In addition to that, he’s also an English teacher, translator, painter and the manager of a sculpture project.

So, what’s your project about?

‘The idea is just an outdoor sculpture exhibition using the public space. My original inspiration comes from Australia: in Sydney, there’s an exhibition called ‘Sculpture By The Sea’. And this has kind of mushroomed into two other exhibitions: the second one is also in Australia, but on the west coast, and the third one is in Denmark. Each has a different moral and such, we use that as a starting point. Our goal is to have an art event in the public’s own space, like it’s taken out of a museum.’

The office of his translation bureau doesn’t look like the room of an art enthusiast, but more like that of an insurance salesman. A large filing cabinet sits in the corner, while Michael’s desk is cluttered with books and binders, a box of painkillers and an Apple computer on a standard. ‘The bureau is a micro-business,’ he explains. ‘It just manages to survive and give me a little bit of money to live off.’

Art is still his real passion, he assures me: ‘I did a master’s in cultural management at the local music academy before starting the sculpture project. It’s delivered in English, so for me, it was absolutely brilliant. I would say it’s probably one of the best master programmes in Estonia.’

Is that the reason why you came here?

‘No, it’s because I married someone with Estonian heritage. Her parents lived here individually during the war, to get away from the Soviets, and they met and married each other in Australia. So my wife was born there, we met in art school. She’s a sculptor, while I trained as a painter. Anyway, when we started having children, we immediately decided we would raise them bilingually in Australia. At a certain point, we thought it was the right moment to move to Estonia, for about a year or two. Just to immerse our children in the language and culture. Then we got kind of stuck.’

Will you ever go back?

I’ll definitely be going back to Australia, but probably after about three to five years. That’s because I’m still in the early stages of the sculpture project. So by the time I go back, it’ll probably be to just retire. The labour market is disastrous if you’re older than 40.’

Despite being 50 himself, he doesn’t rule out an Australian job completely. ‘When I get back to Australia, I might be able to join an existing sculpture project there. There’s this one that I already mentioned, but there are two or three others with a similar concept.’

Michael’s early days in Estonia caused quite a culture shock, he confesses. ‘For me, coming from a multicultural society such as Australia, the thing that really felt quite odd after a few months was how homogeneous this society was. I went through this period of feeling this was really weird. I never realized such things before, I struggled with it for a couple of years. And then I got through that barrier, I adjusted to it. That kind of genetic homogeneity does affect how I manage, though, even now. There is less genetic variety: facial types are more similar. I’ve taught English to a lot of persons, so when I’m walking on the street and look at people, I wonder whether I know a person and if I should say hello.’

‘Exactly, I don’t know. And I go through this every time I walk past just about everybody on the street! It goes both ways: sometimes I think I don’t know a person and then they say hello to me. And I’m like: “Oh, it IS you, hi!” Other times, I say hello and even call someone by name, after which it turns out to be a completely different person.’

It turns out trying to see nuances in Estonian faces isn’t easy if you’re a foreigner. ‘I’m used to discerning nuances in Australian faces,’ Michael sighs, ‘which have a much greater variety, with different races and all. Here, it’s like what Europeans say about Asians all looking the same. Apparently, it’s all about the society you’ve grown up with, so you’re not used to picking between people with such genetic similarities. For me, it’s a daily occurrence.’

He recalls: ‘Only two days ago, a student of mine walked past me near my house. Just as we were inches away from each other, she said hi and laughed, because I had looked at her. That’s another thing here: eye contact is important on the street. The reason behind that is that this is a culture where if you recognize someone, you at least nod. If you know them well, of course, then you’ll say hi or even stop to talk to them. So I made eye contact with this girl, it was only when we almost passed each other that she finally said hi, laughing at me for not recognizing her. I felt really silly.’

But do Estonians have to make eye contact because they wouldn’t recognize each other otherwise?

As someone from outside Europe, Michael sees a clear characteristic of Europeans. ‘I’d say Europeans are very diverse. There’s a huge difference between Estonians and Spaniards, for example. I also think a lot of Europeans prefer to live in places that have been occupied for a while: they would miss such an element if they’d go to live in a place like Australia or the US.’

Do you think European unification is possible?

‘Sure, I think it’s possible. But I don’t think for a minute it’s being driven by a cultural thought. It’s being driven by economics and business. But the cultural value of it has come, as well, because of the free movement of people, regardless of their wealth and such.’

But that free movement also means a flow of immigrants, I tell him. He shakes his head: ‘I think Estonia’s quite a dangerous place for immigrants that look different. If I’d have black or dark skin, I would choose to go to Sweden. Here, you’d probably get beaten up within a month.’

‘Yes.’ He mentions the example of Abdul Turay (a black British expat who won a seat on Tallinn’s city council) as particularly striking: ‘When he came here, he took up kickboxing for that reason. He said he had to keep fit and needed to protect himself in this country.’