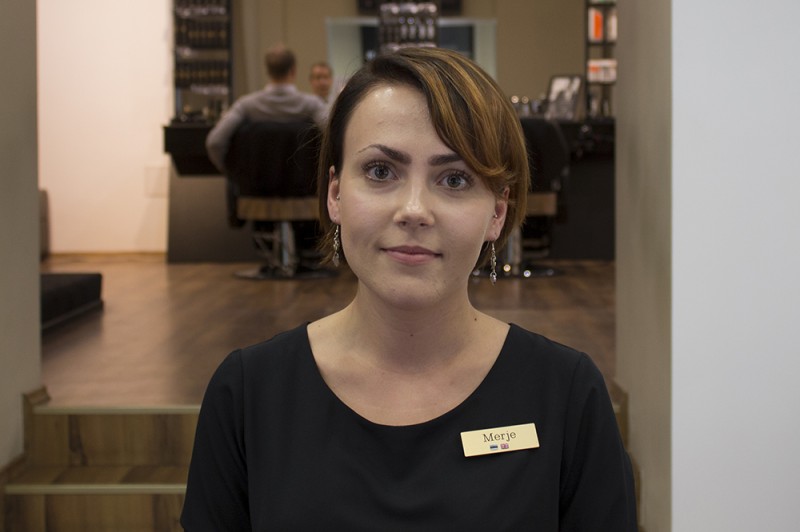 She rarely votes in regular elections and didn’t vote in the European Elections. ‘Because you cannot pick the best person. You always have to compromise. Not voting is not a problem, because nobody here is the criminal. Everybody wants the best for Estonia anyway,’ she says in excellent English. ‘Learnt it from music and films but above all, from church.’ She is a member of the Praise Chapel, the international church of Pentecostalism. Being a Christian helps this hairdresser to deal with difficult clients. ‘I try to be positive about other people, of course. Christians do interact better with people, because they are more compassionate.’

Merje (22) works as a hairdresser at a barbershop in Tallinn. Only men for this girl, who is not afraid to handle a knife (‘I haven’t killed a man. Yet,’ she jokes), but all of her colleagues are women. She has some time for me between two appointments and I sit down in this male environment with a girl who likes everything about her job. On one side of the shop there are lazy, brown leather chairs you immediately want to dive into and never leave, and in the middle, a big pool table.

Was it a childhood dream for you?

‘I always wanted to be a traditional hairdresser, but now I like being a barber. First, my mother cut my hair and after that I did myself. It is possible with two mirrors.’

The job she loves so much has a mixed reputation in Estonia. ‘Some clients talk with you as if you are very special, as if you know everything. And there are some people who come here and act like I am almost criminal. But,’ she adds. ‘Everybody has bad days, so that is their problem. I am just doing my job.’

I see on your badge that you speak Estonian and English. Do you speak Russian as well?

‘A little bit, but not enough to put it on the badge. All of my colleagues are Russian, so I am learning more. When we communicate, we start with Estonian, then Russian and finally English. We say the words that we know, because they want to learn Estonian as well.’ This is very exceptional in Estonia, because Russians live in their own communities. ‘There should be more integration. A lot of Russians living here don’t speak Estonian, but they expect us to speak Russian.’

The Russians are not all bad. ‘Russians are very open. If they like you, you are their best friend,’ Merje tells me. But interaction between Estonians and Russians is still tense. “Russian is not an official language. They wanted it to be, but everybody said no. If it is an official language, it ruins the idea of an independent Estonia, because Russia always wanted to have it. We have to stay independent.’

She has only travelled to two countries, she tells me. Last weekend she went to Stockholm, her first time there. ‘I do not know if I like to travel. I think it is good to travel if you have been in the same place for a long time, then you enjoy it. But if you have to go more often, maybe staying in one place then is more comfortable. Too much coming and going. Having your whole life in a backpack.’ But she feels a part of Europe. Because of the EU her country has developed quite well. ‘We would not have been like this if we were not part of them. Many people here think that. But, of course, every union has its disadvantages, in this case all the EU rules.’

What are the bad rules then?

“There are restrictions. We also have to support the Union because it helps others as well. I know that is also Christian, but a lot of Christians have different values than the Union. The helping part is Christian, but the nature of that help is not exactly the same. The EU has helped with the army and stuff, that is different…” That is why she feels Estonian in the first place, but also very connected to Europe. “If someone from America or Australia sits in your chair, they have a completely different understanding. But with Europe, it is more the same.”

Are there European values you think?

“I think so. We have the same money, the basic thing we deal with every day. That makes us feel more at home.”