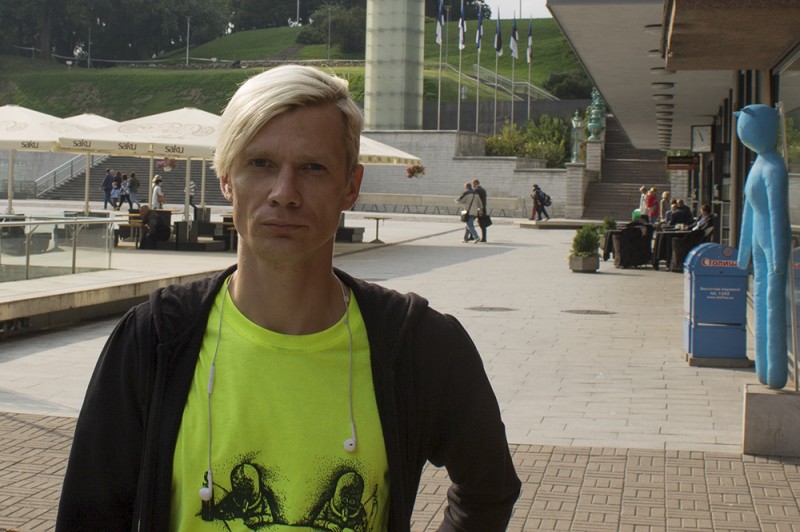 Kiwa is waiting for me outside of the Art Academy of Tallinn/Tallinn Art Hall with a cup of tea: a man’s got to smoke. He plucks a book out of his plumber’s bag, one he has produced himself, as a present. But really I should have given him one, as it’s the day before his 39th birthday. His latest project, which follows on documentaries and visual art is the paranoia publishing group ltd. Is there a red line?

‘Actually I was the first artist in Estonia to work with interdisciplinary practices, doing different things. I did my first exhibition in ’95, and I wasn’t understood. At all. People thought they couldn’t take me seriously because: “sometimes he’s making art, and then he’s making music, and then he’s writing.” It also was a problem for me, because I didn’t know what I really should do or what my artistic identity was. Am I a writer or a musician? But then I somehow changed ideas, and sound became more important to me than music, sound as a phenomenon. Literature, the same thing, I became interested in text as raw material. And I wanted art to be reduced to ideas, not visual.’

While talking he sometimes looks at me inquisitively to check whether I’m following him. I am, at least I am trying, and in the process I become more and more impressed by this highly intelligent, interesting artist.

‘I believe that in Estonia the image of an artist, especially a contemporary artist, is quite bad. On the Internet many say that contemporary artists just waste money. And sometimes when I am walking around the city, I feel that people are watching me and I wonder if they think that I’m some kind of bad person. Not dangerous like a terrorist, but something uncanny they don’t understand.’

After many eventful years, which included being active in the 1980s Estonian punk and post-punk scene, visiting nomads in Mongolia and making a documentary about transgender people in Indonesia, Kiwa now likes to spend time in his studio in Tartu, a quiet old University town in the south of Estonia. ‘I used to complain about the Estonian weather like all Estonians do, but I learned to appreciate it after my experience in Indonesia. I’m happy with the beautiful nature, and the possibility of taking the boat to the islands and getting lost in the forest. Estonian people are in touch with nature and many still hold onto old beliefs. The country is like a village, but when you move two hundred kilometers you can have a completely different feeling of time and space.’

Kiwa regularly travels to Tallinn where he teaches first-year students at the Estonian Art academy the basics of contemporary art. ‘I can give lectures, because of my good artistic CV. But since I dropped out of different universities seven times I don’t have a proper degree, and therefore I’m paid very little. I even had to bargain to come here by bus. Once I made a calculation that with the amount I earn I can come from Tartu to Tallinn, buy one hamburger and go back to Tartu. But giving lectures feels like a mission.’

That’s quite funny. You are a well-respected artist in your country and still it’s hard for you to make a living out of art. A Latvian artist told me that it wasn’t that bad for artists in the Soviet days, because they were heavily sponsored. They were not free to make what they wanted, but they could live from it. How is it here?

‘The basement of this academy/art hall has an artist’s club. During Soviet times it was very popular and you had to be a member to get in. Back then, if you wrote one book per year, it was possible to party the rest of the year in this club. Art had a function. People went to see the exhibitions to get good emotions from art, because everyday Soviet life was very grey. Estonia is still in transition and actually I like it, because there is more space for improvisation. But at the same time it feels like we’re in isolation, because we don’t know if we belong to the East or West. People on the streets are generally quite right wing and have a desire for shiny western things and Coca Cola. I know people are quite homophobic and in public polls fifty percent of the votes don’t want to have same sex marriages. If you see a world map regarding legalization, this seems to be an Eastern European problem. ‘

When I ask Kiwa if Estonia changed after it became a member of the EU, he mentions the big influence Russia still has on Estonia. He refers to a recent incident where Russian border guards kidnapped an Estonian secret agent, one week after Obama visited Estonia. He’s suspicious about the coincidence and feels uneasy with the impact of propaganda on Russians living in Estonia. ‘Russian workers who were brought here in the beginning of seventies live together in housing projects. There used to be a rule that you’d need to pass an Estonian language exam to get an Estonian passport, but many didn’t do that. That type of Russian only watches Russian news and listens to Russian propaganda.”

In Russia the party members who started their career in the Soviet Union are currently still in high positions and Kiwa explains that the same applies to Estonia. ‘The former Estonian prime minister, who was the longest-serving minister in the European Union, just lost the election. He now works for the European Union. I don’t think politicians care about ideology or political philosophy, they just want to have a career.’

Did you vote in the European elections?

‘No I don’t. I have no hope and no vision of what will happen. There’s a short story by Jorge Luis Borges called ‘Aleph’, which refers to an impossible space where you can see everything from every angle and it’s all very complicated. It reminds me of contemporary Europe, because everywhere you see the same cars and people wearing the same clothes. Many ideas from classic 1960s science fiction about standardization and pop-art have now become normcore reality.’

‘Geographically yes, but mentally I don’t know. The Europe I dream about is an unattainable combination of anarchist freedom, a socialist welfare state, and a well functioning economy, which has the best bits from everywhere.’