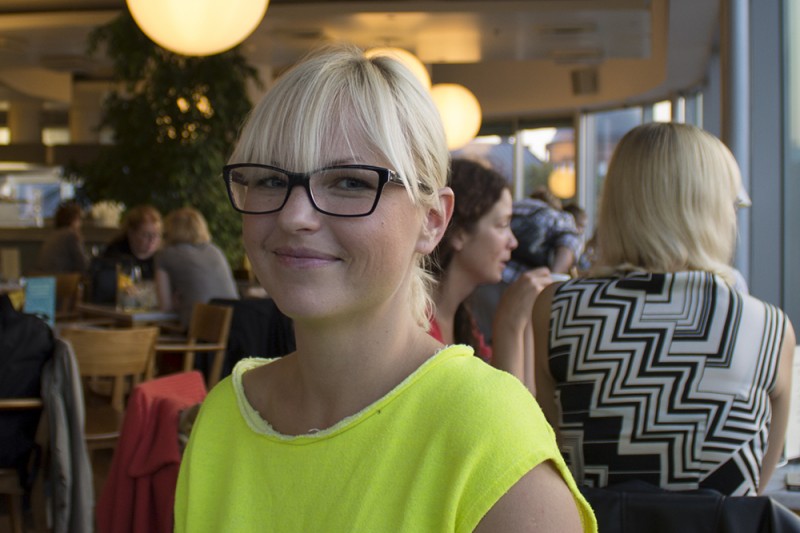 I met her on the bus from Riga to Vilnius; we were each sitting in one of the two very comfortable leather chairs that make up the last row. There is no train connection between the two capitals, but this luxury coach trip was just as good, and not expensive at all. Before getting down to work –earphones on, hammering away at our laptops – we talked for a while. I found out that Karoli, only 31, is a serial entrepreneur who, having started her first company at 16, was twice nominated to be Europe’s Young Entrepreneur of the Year. I don’t think I could have found a better candidate for Youropeans’ entrepreneur in Estonia.

So two months later we meet again, in a hip Tallinn tearoom, on the top floor of a brand new shopping mall, right across from the city’s National Opera House.

How is Jobbatical doing?

‘We are about to launch the site, which is very exciting.’ Her new company is a matchmaker in tech jobs all around the world. ‘We believe that there are millions of talented people out there who are interested in participating in world-changing projects. They can find one another via Jobbatical. It will be an international launch, run from Estonia. First we’re aiming at employers in tech cities, like Tallinn, Berlin, Helsinki, London.’

She is not alone this time: her one and a half year old daughter is with us. She is playing with a phone – a tech toy! – with a broken screen. ‘It has been dropped from the third and the fourth floor. I can still call with it – hats off to Apple.’ It would also be dropped a few times during our conversation .

‘It has changed a lot over the past ten years.’

What is it like to an entrepreneur in Estonia?

‘Currently it’s very easy to start your own company, in 15 minutes, online – it’s cheap and easy. Bureaucracy is low, there is hardly any paperwork. You can submit your annual report online; it’s even compulsory. And the attitude towards entrepreneurship is good too: being one, creating jobs, is really valued nowadays in Estonia. Also the start-up community has been really bubbling since the Skype-money was released.’

I thought it was Finnish?

‘No, it was Estonian, developed here. A Swede and a Dane were the businessmen, and Estonian guys the developers. Their success created a whole new era of start-ups. Transferwise, for example. Labour taxes are quite high, but at the same time there are zero corporate taxes. Overall it’s one of the best places for running a business and hiring people. It’s still cheaper to hire somebody here than in Silicon Valley.’

What type of people are you?

Estonians are atheists, closed. We are Nordics. The least fortunate Nordic country though, because we were occupied so many times, it’s a miracle we have managed to keep our own culture.’

Are you nervous about the Russians at this moment?

‘Yes, I am, we all are. Obama was here this autumn, his speech was wonderful – you should listen to it. He gave the whole world a summary of our history concluding that he would be there to protect us – Estonia and the other Baltic countries. And only a couple of days after Obama’s speech, or after the NATO summit, an Estonian secret agent was kidnapped near the border. On our side. On their side, Russia said. It was a statement: you can do whatever you like, but we are the boss.’

How do the Russian Estonians relate to that?

‘Our nanny is one! She doesn’t speak Estonian, but is an amazing teacher. So my daughter already understands better Russian than me. I’m not comfortable talking politics with her. The problem is that they are informed by Russia; they are within that sphere of influence.’

Is that also why Estonia seems happy with the EU?

‘We love Europe! We spent 50 years behind an iron curtain! The nation was jailed. We respect the EU, Europe. The Estonians are also the first to implement the EU regulations, I’ve heard. We have a combination of German ordnung and Soviet rule obedience. We joke about it, but it’s true. It’s not helpful when you’re running a small restaurant for example: these regulations aren’t always very practical.’ She thinks for a moment. ‘If you ask the Estonians, they are happy with the EU. If you ask a Russian, I don’t know…’

I haven’t managed to interview a Russian.

‘It’s because they don’t speak English.’

But they go to school, right?

‘Yes, it’s also our fault, we have not been good at integrating, we should have been better. Pff, it’s not all milk and honey here,’ she says. ‘We’re not very tolerant, maybe that is what living in a small, closed society does. We’re not used to different races for example.’ Karoli is blond and blue eyed as are 90% of the other guests in the tearoom. ‘A recent survey said that successful cities should have three components: technology, talent and tolerance. We are missing the last part…’

What should the European dream look like, for an entrepreneur?

‘That requires more thought, but let me try… well, we still cling to our own products when doing business, to our national stuff, like our own cheese. And I prefer openness, open economies, completely open markets.’ While her daughter eats, now and then offering me a spoonful of her spaghetti, Karoli continues: ‘And something else. Estonia was in a deep recession, but we responded by cutting all expenses, all salaries. For everybody, and we understood. The government that was responsible for all these cuts was re-elected by an even wider margin. I like that mentality, that everybody understands where the money comes from. Instead of the southern European way, where everybody steals from somewhere, and when somebody takes something away from them they scream and take to the streets. Here there is an understanding of how value is created, and more people in Europe should know that. If I work for a company I create value and this will pay my bills, it doesn’t come from the government or Brussels. So becoming an entrepreneur should be really easy.’

‘First of all I would change the balance of power in Brussels, giving them more power. We see it right now, with Russia: the EU is the weakest, not able to take a position, to say anything. So they are incapable of doing anything. And I would decrease bureaucracy; the EU could learn from Estonia and other new, small countries that have managed to avoid bureaucracy. Best practice. Less paper and more involvement through E-governance.’

And off she goes, work to be done, a company to start, maybe resulting in another nomination for Europe’s Young Entrepeneur of the Year.