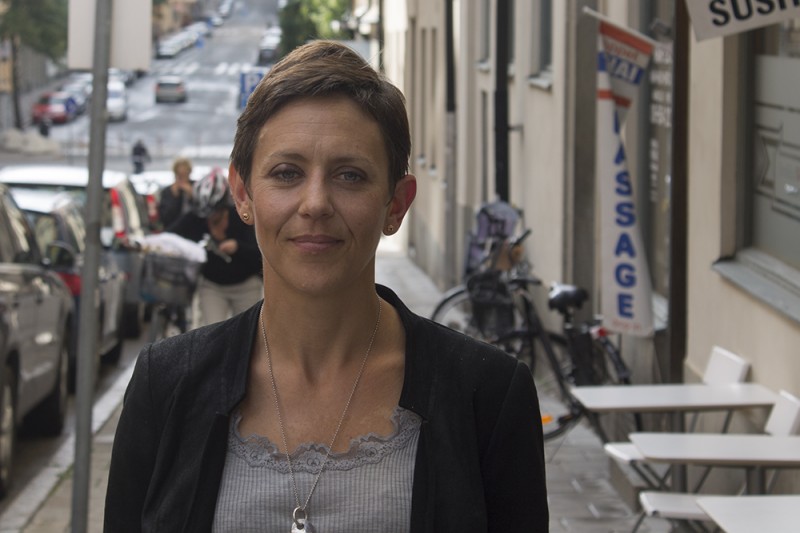 Hedda is exactly on time for the interview. Which is very Swedish, but maybe less characteristic of the artistic type – something this pretty woman with the short hair and a slim figure definitely is. She has a huge passion for acting and performing. ‘I was 21 when I started acting’, she says. ‘I got a scholarship to a college in the US. My family expected me to do something like that, to improve my academic standards in different ways. But then after a day or two I met a couple of people who were going to do a course called ‘voice and movement’, and they were very cool, so I switched one of my more serious courses for that one. That’s how it started.’

Nowadays she pursues other things. ‘I’m primarily a producer and director. Since SEVEN I haven’t been doing any serious acting.’

SEVEN is about seven women’s rights activists, who tell their personal stories on stage with humor, seriousness and passion, relating the terrible and the great events in their lives. A gripping way to raise awareness of the global and ever-present issue of women’s rights.

‘Different, but it’s a lot of fun. A lot of the people who take part in SEVEN are not professional actors, but a lot of them are professional public people. And these people, who are used to being in the public eye, often become very nervous when they realize what they’ve gotten themselves into. They are scared about actually portraying another person on stage. If I do it right and they can trust me enough to follow their instincts and channel these voices, they become incredibly naked. And when that happens they don’t put anything on or try to act, they just rely on their own imagination.’

‘I can imagine that it’s interesting for the audience to see what happens.’

‘It must be, since this project keeps going on and on.’

‘Do you believe that the project is making a change?’

‘You have just put your finger on the crucial question. Because of the structures that we built up and because of the very generous help we’ve received from foreign sources we have been able to go in and trigger a debate. The discussions about women’s’ rights in the Balkan media, for example, are gradually changing. We encourage discussions in previously closed societies where activists and low-profile government members have never talked in a structured way, because they have been so demonized in their own society. So yes, I think this working method really does affect how people look at women’s rights.’

‘How difficult is it for you to live a normal, material life here in Sweden?’

‘I’m an entrepreneur, because I have my own company. I have been incorporated for five years. I wouldn’t say I’ve been lucky, because I have worked very hard. I’m at a point now where I think I’m doing fairly okay. When I think about what SEVEN delivers to the stakeholders, I know I should have asked more from the beginning. But arts are unfortunately not valued very highly. Most of the people outside the cultural sector have no idea how little money we make.’

‘How is the Swedish government helping with that issue?’

‘The cultural sector in Sweden has a tradition of being supported by different institutions, but funding has been cut over a long period of time. I’m getting really political here, but if you look at the actual money that the cultural sector gets compared to some other sectors, it’s quite low. And even though I am okay, it’s not okay. Years of experience and knowledge and talent have been put into this play and I don’t believe I’m getting what I deserve. The basic problem is that the artist’s work is really undervalued. The artists that go out to a school are making 10 euros an hour. Is that okay? No, it’s not okay. They are asked to deliver the knowledge that they acquire into these big ensembles, which they are then thrown out of for a pittance. But on the other hand, I don’t want to be bitter. I could not have dreamed about working on a play like this, it’s fantastic. So it’s great to see that our cultural and governmental institutions are supportive of this kind of project.’

‘I believe that art in general is undervalued.’

‘And this is the discussion about art: how do you measure the good in it? I was talking about how I deliver value. I’m not afraid of talking about that, I think it’s good. But where am I coming from? I had no idea what I would become, but years and years of training took me to a place where I can do things like SEVEN. I am hugely invested in this project. And even though I am okay, it’s not okay.’

‘When you asked about value I immediately thought about money, but you also have to look at all other kinds of value. I do feel that people here in Sweden place less emphasis on prestige. The Swedish people put a value on the civil system of a culture. It doesn’t have to be a particularly fine culture on the other hand.’

‘About Europe, I understand that you’ve also performed in Brussels. How was it?’

‘I gained a lot from it. It was a performance for southern Swedish, female politicians from each parliamentary party. The main premier of South Sweden was present as well. One of these women was also seated in the EU parliament. So I stayed in touch with her and she loved participating in the play. She saw a possibility of doing the same in the EU. It was important for her to bring the project there and involve female parliamentarians from other groups. So we worked together to realize that idea. The other parliamentarians trusted her, because she had done it before. So we did this thing and it was a success.’

‘Very much so. I don’t believe in God, but thank God that we entered the EU. Joining it meant change for me, and the chance to work in other countries. Hopefully the other European people who work with art will come to Sweden’, she laughs. ‘But sometimes I’m afraid that we’re in decline’, she continues on a more serious note. ‘We have done some terrible things in the past and now things are bubbling up again, possibly close to an eruption. It’s visible in Ukraine right now, for example.

‘One of the bigger debates in Europe is whether or not we should encourage the ‘fortress Europe’ mentality. Do we need higher walls or should we let everybody in?’

‘It’s easy to say, but I don’t think it would be a catastrophe for Europe to open up the borders. I think that the people who want to come here have a high level of energy and they want to survive, so maybe they can shake things up a bit. If you look at it from a more philosophical viewpoint, I can’t believe we won’t let them in. We have everything here. How can we watch people drown in the Mediterranean Sea? I don’t know, maybe Europe’s glory days are over. That’s what some say. But I really believe in the EU, so I hope it will survive.’