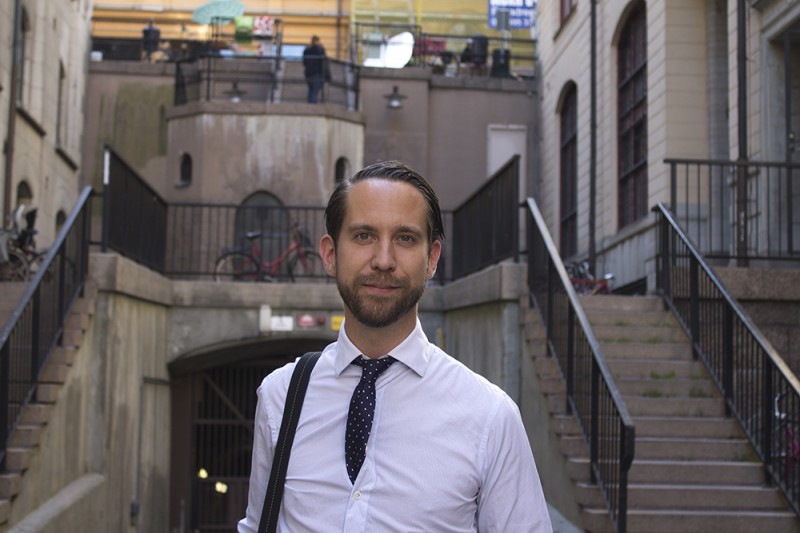 Here is a man who is more or less defined by his tie. With his shirt partly unbuttoned and the tie tucked into it, he is both making a fashion statement and revealing what he does for a living. Håkan owns a tie company (www.umotive.com); people who need to look the part come to him for his edgy designs and variety of materials. As a passionate traveller who has also lived abroad, Håkan has clear ideas about Europe.

‘So, we’re talking about living abroad and the reason why you would stay in Stockholm.’

‘I really liked living abroad, but then my daughter was born, two years ago.’

‘Thank you! It makes you realize what’s great about Sweden, really. Things like child care, free health care, all these things which, while growing up, I never spent much time thinking about. But now I realize how important they are, especially after living abroad as well. My last job was with Beats Music, the American company.’

‘So I was working for a small start-up in Stockholm, and we were required to be a part of Beats Music. And then, last fall, they decided to close the Stockholm office. A couple of my colleagues decided to move on to San Francisco, but after a lot of thinking and discussing, my wife and I came to the conclusion that we wanted to stay in Stockholm.’

‘Well, I really enjoyed San Francisco, but we want our daughter to be able to visit her grandparents frequently, and they live here. And then there are simple facts like economics: the cost of living in San Francisco is extremely high.’

‘Oh yeah. Speaking to colleagues in San Francisco, I heard it wasn’t uncommon there to spend maybe three or four thousand dollars per month on child care. And that child care’s not even as good as we get here in Sweden, which is almost for free. There are a lot of things that still need improvement, but we definitely have a good life here.’

‘What improvements? Is the government doing the right things to support your entrepreneurship?’

‘I think one of the things they could do is to remove obstacles, like bureaucracy. There’s a lot of talk about different tax rates and stuff like that. But the way I see it is this: if it’s only the tax level that’ll make or break my company, then I’m doing something wrong.’

‘Good! I mean, it could always be better, but I’m getting a lot of media attention. I was actually featured in Dagens Industri, which is like the Financial Times of Sweden. They published a full-page interview with me one month ago.’

‘Because I’m doing ties. I’m a guy in fashion, doing something a bit unconventional, but also trying to revive an item that’s sort of forgotten.’

‘This is the way I wear it, the reason being I accidentally dipped my tie in a cup of coffee too many times. But then it became sort of a fashion thing for me, a statement.’

‘Most people working in that area realise that they need to have a tie, but they don’t want to be as boring as their older colleagues. So that’s what I’m selling to them: some of my more edgier designs. I design ties all along the spectrum from traditional to edgy. I don’t want it to be provocative for the sake of it, I want to have some kind of idea. For example, when you look at this tie, it looks like a traditional polka-dot at first. But then you see there’s a dot missing in some places. You don’t see it right away, but when you look a bit closer, you pick up on things like that. I’m trying to incorporate pop culture as well; my logo is this small Space Invaders symbol.’

‘Something else which has occurred to me: in many Western European countries like the Netherlands, but perhaps Sweden as well, people aren’t really interested in Europe. Europe isn’t very popular.’

‘I think the misconception a lot of people have is that we pay a lot of money to Europe and don’t get much of that money back. I personally don’t think that’s the case. But I believe in the old idea, the project the EU was based on, after the end of World War II.’

‘Okay, first it was the European Community, with the first six countries trying to cooperate economically. And economic connections help to quell the motive for starting a war. But in what way do you think the EU has become more than that? ‘

‘Moving around, for example, making that easy. I think that’s a good thing. The more people meet different people, the more they realize we’re pretty much the same in many ways. We have our differences, of course, but still.’

‘But do you think there are European values?’

‘In some ways. In contrast to Asia, at least, I feel there are some things. I don’t know the exact numbers, but aren’t the majority of Europeans Christian, for example?’

‘At this point, I think so, but that’s only an assumption.’

‘Speaking of opposition: there are these tensions going on between Ukraine, Russia and the EU. Which direction is Europe going in, or what’s it going to be like?’

‘I’m very disappointed about this unnecessary war. I think the EU could have an important role to play there, putting pressure on Russia and stressing that Ukraine is a part of Europe, which we want to incorporate it. Because we believe that’s a good thing. And hopefully, the EU can get Russia to take that direction as well, but that’s probably a much more difficult task.’

‘But what’s the general direction of Europe going to be? In America, they have the American Dream. Could we have a European Dream?’

‘I believe that because we now have so many people in it there are a lot of things that should be improved within the EU. Like the Parliament and all the bureaucracy in Brussels. It seems a lot of money’s going to the wrong things there, as well. But the whole idea of people in a parliament, with the members coming from all over Europe, could make for an extraordinarily strong force. I believe in it.’