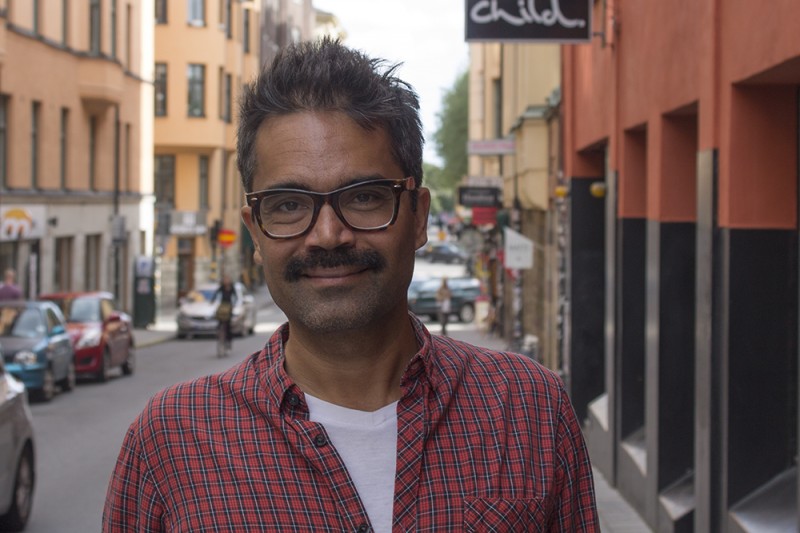 ‘My ideal world is a world without countries and a big UN-kind of government,’ David says, when I meet him at his agent’s office in trendy Södermalm. ‘The United States of Europe therefore would definitely be a good next step,’ he continues, while walking around on his red socks. I smile. It’s obvious why he is one of Sweden’s most famous stand-up comedians. When he takes a seat in the chair across me and I see his serious face, I realize he wasn’t joking. I quickly get my act together and proceed with the interview.

David, you started doing stand-up comedy in 1994. What kind of country was Sweden at that time?

‘Pretty much a different country. It had a very low level of immigration until the early nineties. On television you would rarely see someone who wasn’t blond and blue eyed. If people saw my name on a poster or on a contract, or when I came to a club to perform people always spoke English to me. “Hello David, welcome to …” And when I answered in Swedish I could see their brain working, but still they kept on speaking English to me for quite some time. They just didn’t seem to realize that someone who looked like me could be Swedish. Fortunately that has changed now.’

Did you help bring about the change?

‘Maybe. I talk about it and make a lot of jokes. Humour surely helps integration.’

What’s it like now? Can you make a proper living as a stand-up comedian in Sweden?

‘I think there are not more than 30 stand-up comedians in Sweden who can live solely from this occupation. But the last 10 years the market has exploded. When I started, it was a small circuit with small club gigs. People were having a beer and eating and listening to some comedy. Nowadays it’s a big, established thing. You can buy a pretty expensive ticket and go to a big concert hall with an audience of a 1,000 people. ’

Sweden is a very transparent, egalitarian country – almost everybody is in the phonebook – what is it like to be famous here?

‘I think that it is pretty laidback if you compare it to for instance the States. If you’re one of the top comedians there, you probably have bodyguards and a big fence around your house. Here you don’t need that. Everything is smaller. Everything is way easier. Being famous in Sweden is mostly advantageous.

Do people tend to make jokes when they are around you?

‘O yes, all the time. It can get pretty boring sometimes. But when I get tired of it, I try to remember that these are the people who will be buying tickets for my next show. I have to be kind to them. Especially now with all social networks. It would only take an hour for a negative reaction to be spread everywhere…’

You perform not only in Sweden but also in Beijing, Denmark, Finland, New York, Norway, Russia, Spain and the USA. What is your experience: do people in different countries have the same sense of humour?

‘Yes. I have found out that what people laugh at is quite similar everywhere. Some of the jokes I made in New York and Beijing were exactly the same as the ones I make here. I just translated them. And they work. Of course there are some jokes, about specific persons or specific things, that you can only make in a very small area. I don’t use those jokes. They don’t travel very well. But a lot of human behaviour and human feelings – basic feelings – are the same all over the world.’

What is your view of Europe?

‘I love to travel and I have seen a lot of Europe. I am actually liberal in the sense that I’m against the nation state. The idea of a European Community and the UN idea, I like them very much. Different people, languages and cultures but no borders. We can move freely and work and live wherever we want. That would be my ideal. It is in the human nature to be free, try new things, live in different parts of the world, meet different people and speak different languages. A new political construction could make this all possible. The EU is definitely a step in the right direction, but if it were up to me, a lot more steps would have been taken.’

So the next step would be the United States of Europe?

‘I think we should definitely federalize more. But I think a lot depends on the technical innovations nowadays. Politicians can make a lot of rules, laws and regulations, but you cannot stop innovation. Technology will ultimately shape the world. If we can get really cheap internet and public transport, you will not be able to keep people from interacting. You cannot stop people from dreaming. ’

Do many people in Sweden share your idea about Europe?

‘Not too many, I guess. I think most people haven’t thought much about this topic. And if you start discussing it, I think many people will come up with different obstacles. What will happen to our culture and our language? The thought frightens them. One big defining thing in this regard are the beggars from Romania, Bulgaria and other southern European countries you see in the streets of Stockholm at this moment. In a way it is good that you see them begging, because it reminds you of what the world really looks like. It is so easy to walk through the streets of a well developed city and think that this is the norm. But it is definitely not. It is a very limited paradise, one that exists in just a fewcities of the world.’

Now that the internal borders have disappeared, should we strengthen the external borders, create Fortress Europe?

‘No. I think we should open up everything. My view is that there shouldn’t be any borders at all. I think there are about 100 million refugees right now in different camps worldwide. That is not so many. In Sweden we have 8 million people living in a huge country. So we could easily have 10 or 20 million people here, starting fun businesses and building prosperous lives. Other countries could also do the same. ’

The existence of nation-states is perhaps also a reason that not many people are interested in Brussels?

‘Definitely. Most people think that it doesn’t matter who rules, it will still be the same up here. I think the problem of the EU system is pretty complicated. To achieve the pan-European dream we should perhaps find a face, a charismatic person who can give Obama-like speeches and is really good in a couple of major European languages. And then there is the Eurovision song contest of course. That helps too.’

Aren’t you afraid that when all borders vanish and we become this world society, everyone will be too much alike?

‘I don’t think this will happen, because most people don’t want to move. They want to stay in their own village. Just look at a country like Sweden where people have been able to move freely for hundreds and hundreds of years. There are really specific accents and dialects people speak. That means that they’ve probably been living in the same village for generations. Of course globalization will change the world in some ways. Even now everywhere you go you can shop at H&M or drink a Starbucks coffee. It can get pretty boring. But still, in my opinion it is more difficult to start a war against people who have exactly the same background, the same preferences, as you do. And if that’s the price we have to pay to get rid of ethnic conflicts and wars…’