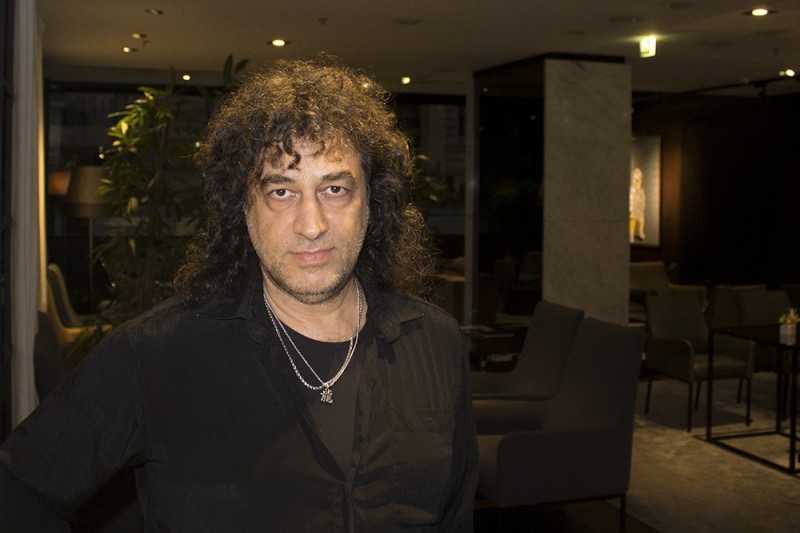 A Bulgarian-born guitarist, violinist, song writer and producer. A 53-year-old Finnish citizen with two daughters who is passionate about hard rock and opera. An intelligent Europhile and a Bulgarian celebrity from the 70s: the one and only Nikolo Kotzev.

What is the Bulgarian music scene like now? Most of what I have heard in Western Europe is about Bulgarian folk music.

‘Bulgaria has given the world many classical voices : very big names such Nikolay Ghiaurov, Nikola Gyuzelev, Rayna Kabaivanska. It is an indication that the Bulgarian musical tradition is serious and well-respected. The list goes on, because Bulgaria is nurturing new voices every single day. We have good teachers and good local talent. This country has given birth to extraordinary singers such as The Mystery of Bulgarian voices.’

But what is it so special about the Bulgarian folk music?

‘It is admired by a large number of people, because of its unique sound, and the different rhythms which are so typical of Bulgarian music. There are numerous ensembles that tour the world performing purely Bulgarian folk music. A lot of people have adopted it just because it is so different.’

Nikolo is continuously explaining the specifics of the local music. As a song writer himself, he has experimented with, but never really performed it. His true passion lies somewhere else, with the strings of a guitar waiting to be played: pure rock, rock opera, symphonic rock and traditional opera.

The list goes on, inevitably leading towards the place that was Nikolo’s home for 25 years: Aland, Finland. The island, which was a stop on one of his band’s tours, also brought Nicolo a wife and a community where he was able develop his talents.

In addition to Finland, Nikolo has been all around the world performing on different stages in countries such as Belgium, the Netherlands, Germany, and many more. But his own national stage is quite hostile to Bulgarian rock music, Nikolo says.

‘I would say rock is not that natural to Bulgarian people. There are only, let’s say, 5 bands that are famous. ‘

Is rock too strange, too much in your face?

‘I wouldn`t say that. It is a way of writing and performing that is different. I can imagine it might be the same if an American or a Dutch person started performing Bulgarian folk songs.’

‘Yes, but in a different way. The whole nation is a big mix of Slavic people, but the mix is not noticeable now. This is how I understand it; Bulgaria is a very old country, founded in 681 AD. Back then the rest of the world was divided. Bulgaria is one of the oldest countries established in Europe still in existence.

Nikolo says the country has made many unique contributions to the world, most of which are unrecognised. The first manufactured gold in Europe, the Bulgarian calendar, which is older than the Chinese version, to name but a few.

It is a pity because when we think about the old European countries where civilisation started most people think of Greece.

‘That is what I am saying this to you. It is a fact we should all know, because Bulgaria’s history is out there on the Internet.’

But people would think: why the Bulgarians….?

‘Because nobody wants to admit there was another country before them. This is a normal thing.’

I am amazed at how beautiful and historically rich your country is, but the image of Bulgaria for me is so unsophisticated. What kind of image do you think Bulgaria has with foreigners?

‘When I speak to foreigners I always imagine their country the same way as I imagine my own. If I see a person who is highly intelligent, very sophisticated and natural, I see his country in the same way he/she is. There is good and bad everywhere. Obviously these things are not accidental. I guess that some nations are able to produce something good out of their difficulties. Other nations are able to produce an enormous amount of bad things despite the fact they live very well.’

In some countries such as Austria and the US the government supports music. Is there any support here?

So you have to rely on your native ability?

‘Yes. It is also in our genes to dislike authority, to feel that others are better off, to want to be the highest in the chain, to show to others we are different, better. That is so typically Bulgarian. That is very unfortunate because the people who have the power in this country are also Bulgarians and these defects apply to them as well. We have had our November 1989. How many years have passed since then? 25 years and nothing has been done.’

Nikolo admits that even though there were some limitations during Soviet times, life back then was easier, because people were not aware of the options they had.

‘I don’t feel the bad vibes when I think about Soviet times. We had room to grow. In a way I am happy we didn’t have so much freedom, because we became disciplined people. The problem with Bulgarians is that they do not respect the law. In our nation the struggle that we have had to struggle to survive for thousands and thousands of years. Each one of us has had to overcome this obstacle. Things are still very dramatic in Bulgaria, because my mother’s pension, for example, is 130 leva which is 75 euros per month. She cannot even pay her electricity bill with this money. How can you say this is a good life? What kind of government would let this happen?’

‘In the Soviet days it didn’t happen. It was better for various reasons, because back then they were printing money, Russia gave us resources, everyone was working, everyone was getting a salary regardless of whether or not they worked. They had no trouble paying their electricity or gas. Food was cheap and other goods too…’

In 1989 Bulgaria was free for the first time in its history, and maybe it has had problems dealing with this?

‘Of course. How can you explain the fact it has been 25 years and the Bulgarian politicians still have not found a way to providing a better living in a country which is strategically located between Europe and Asia. A country that could be central transport hub, which has a fine climate and natural resources? We have all four seasons here. There are talented people: actors, singers, poets and still… we are not where we should be.’

Maybe your marketing has not been good?

‘There are thousands of things that went wrong. 25 years ago these people went to parliament and have done nothing good for the country, they just took care of their own business.’

What good has the EU brought since 2007?

‘It has been a very good influence. The EU is the very best thing that ever happened to this country, because the rules have to be observed, and they provide a framework that keeps this country from collapsing, because EU affairs have to be transparent. If you receive money, you need to invest it in something, show how it has been spent and prove that it is being spent correctly. Unfortunately, they cannot control the justice system. I would prefer to give them the right to control everything. It has been proven for 25 years there is no point in having a Bulgarian government.’

When the EU expanded back in 2002, 2004 and 2005 many Western people thought it was too early for Bulgaria to join, especially Great Britain who feared an influx of immigrants on the labour market.

‘This is against the law. The rules are rules for everyone.’

What do you think of this sentiment?

‘I don’t see myself as a threat to the UK, because I have been there many times and I haven’t stayed there because I like Bulgaria better. I still think the Bulgarian people who go to the UK and think it is going to be easy are very wrong, because they have a difficult life there. I have trouble understanding immigration for financial reasons especially when it comes to Bulgaria, because people who immigrate think their life is going to be fantastic. The life of an immigrant is the life of an immigrant; it always stays the same. Only people that are well-educated and have special abilities, are talented, organised, respect the law, work very hard and create something special and necessary for the society will be respected. ‘

You have seen many countries, you have lived everywhere. Is there something typically European?

How would you describe being European?

‘Compared to other continents, I think Europeans are definitely more cosmopolitan. They have a sense of equality, a very well-defined value system, self-awareness, and generally higher intelligence and intellectual knowledge. When you have to struggle to survive, you can’t think about intellectual development.’