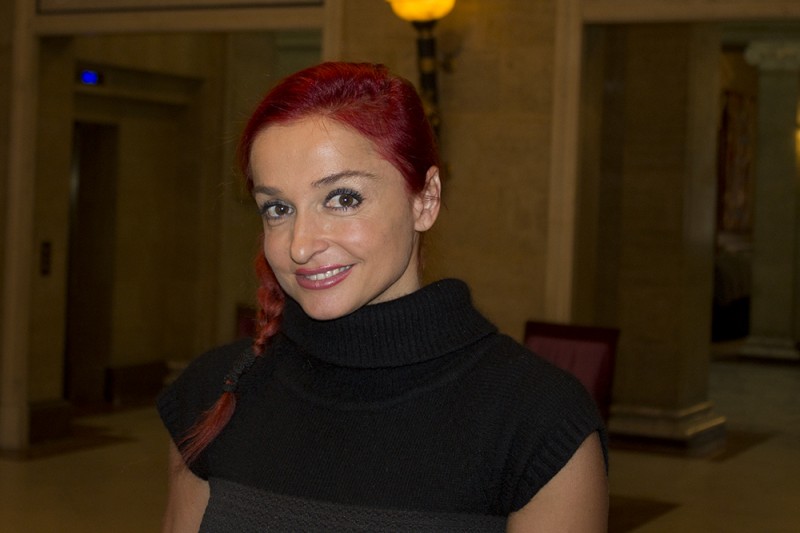 I had always heard that a lot of precious gems are hidden in Eastern Europe. When I sat down in the cafeteria in Sofia’s Radisson Hotel, I realised that some rumours are rumours because they are true. Red-haired 43-year-old fitness model and athlete Merlina Arnaudova proves that Bulgarian women deserve their reputation for beauty.

As a model, Merlina is popular in Bulgaria mainly as a former fitness champion for women over the age of 30. She has also recently taken part in the reality show Survivor. Her ambition does not stop here; I soon discover that she also owns a truck petrol station in the small town of Kyustendil in south west Bulgaria.

Why did you buy the petrol station?

‘Because I like the business. It is difficult one, but I have a lot of friends who help me a lot.’

Her profitable business is makes it possible for Merlina to donate money to causes she supports, including book publishing, exhibitions, sporting events and singing competitions.

‘After I became a sponsor, my first good deed was to publish the book The Marquise Luissa Kassati, who was also a muse and a sponsor, as well a fashion icon like Coco ChanelI asked her what she meant by this. She said that being a fashion icon meant paying a lot of attention to your appearance, posing for talented painters like Boyan Yahnadzhiev, but also sponsoring a wide range of cultural events.

Relying on stable friendships is another important part of Merlina’s life. She admits that the society she lives in sometimes has trouble dealing with her outlandish hobbies and preferences.

‘Being extravagant is not well accepted. They think I am strange, they prefer normal people. I have strange red hair and unusual outfits.’

But today you are dressed quite modestly, and you are quite calm. Your black and white dress is conservative, not really eccentric, I laugh.

‘I wear extravagant outfits only for special events,’ Merlina says with a smile.

Her taste has been shaped, not by brands and expensive clothes, but by her sports career and travels to other countries,which include not only European locations, but also countries such as Singapore, Malaysia, Thailand, Cambodia and Brazil.

Even though European countries are more easily accessible, Merlina admits she prefers Asian countries because of the people.

‘In Asia people are quite poor, but happy. They live in order to survive. When I was in Survivor, a fisherman gave us one of the two fishes he caught that day. This generousity makes you reconsider your whole life.’

The Survivor experience also reminded Merlina she is an independent woman who is anxious to return the favour to her country, which is infamous for its lack of support to sport and theatre.

So for athletes and writers, things might have been better before 1989 [the fall of communism in Bulgaria], but they have more freedom now?

‘Yes, we have freedom, but no money. People just stay home and watch television.’

Despite the fact Merlina is not satisfied with the way her country is governed, she has found her own way of staying active by supporting others and running a business.