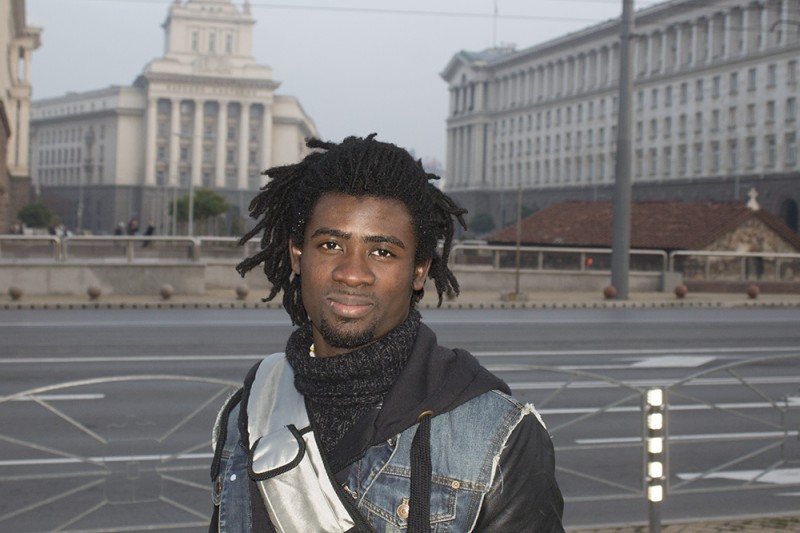 When I arrived in Sofia, one of the very first things, I noticed were the street markets. In front of the tiny shops made of rusty metal and nylon soaked in water, you can find a variety of goods, everything from freshly grown tomatoes to old bicycles and tyres.

Walking near Vitosha Street, I notice an African man working in a vegetable stall. On my way back I promise myself to stop there. Already tired after a long walk, I stop at the same market close to a guy who is arranging the vegetables. When he offers me a pear, I suddenly realise he’s not the same person I saw that morning.

How many Ghanaians are there in Bulgaria? I wonder.

‘We are many; I am not sure about the exact number.’

For Hamid, Bulgaria was not a conscious choice. During our conversation he admits he was in Turkey beforehand. The low wages made him change his mind and he headed for the border. During the almost 8 months he has spent in Bulgaria he has become self-sufficient. He earns enough to make a living, and to think about sending something to his family in Ghana, which is a top priority for the young Ghanaian.

‘One of my brothers in Ghana is going to graduate soon. I need to support him so that he can go to university.’

In addition to making a decent living, Hamid found a girlfriend in Bulgaria. Together they have been victims of racial discrimination: beaten and insulted because of Hamid’s skin colour.

‘Bad things happen everywhere. In every country there are things that you like and you don’t like. We are just nice people who want to work and I don’t know the language, but they are insulting me. When they see I am working with a Roma they start insulting her as well. I am just here to survive,’ explains Hamid.

In the attack, some of his hair was cut off and he was dragged through the street. Nevertheless, the police made little effort to solve the case.

‘They don’t want to admit there is racism in the public domain. They are just trying to hide the case. That is why I went to the local media. Cases similar to mine were shown a couple of times. They include a murder and a case wherea pregnant woman was beaten.’

‘I just want justice. That is all,’ says Hamid. In fact, walking along Bulgarian streets, I notice that people find Africans unusual. Some of them want to touch them to see if it is not paint. The other reaction is to become violent. Maybe if there were more of you they would be more accepting?

‘They are not bad people, not at all. Just ignorant.’

Getting residency documents is one of Hamid’s biggest obstacles.

‘I was rejected, but I applied again. I am still waiting. I have never met any black guy who has been given documents here. If the decision is bad again, they will surely deport me. I am not ready for this, because I have a lot of things to do.’

What will you do if they don’t reject you?

‘That is what I am trying to figure out. I am just ready to fight. I do not want to go anywhere else, because I would have to start again from scratch. I have managed to get something here.’

Before coming to Bulgaria, Hamid admits he expected only one thing: normal people and normal life. He loves the idea of travelling around Europe and the EU, which he describes as: ‘Combination of countries that are together, that share everything so life can be simpler, because wherever you go you feel at home.’

Bulgaria is now his new home, but he is not at all ashamed of his origins. He is proud to be African.

That is funny, because they are not a lot of people who are proud to say ‘I am European”?