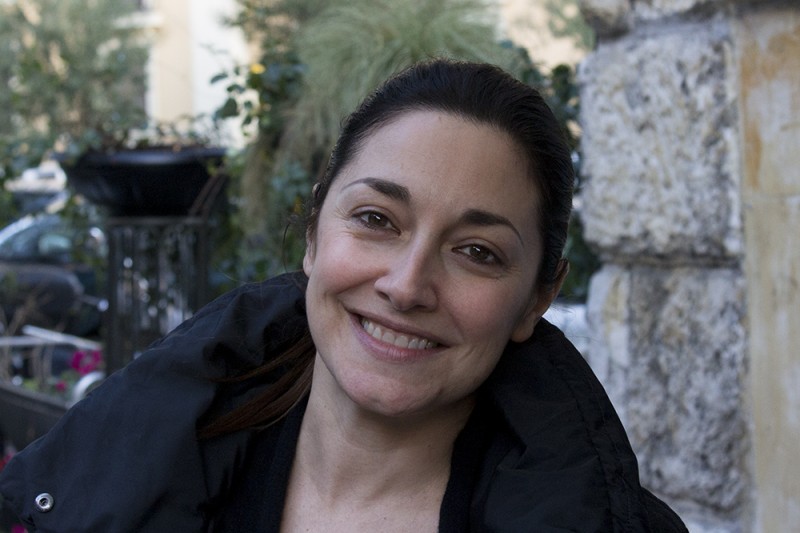 We meet up in a bar in the Prati area of Rome. This neighbourhood is less tourist-ridden, but certainly no less pretty. The streets are clean and spacious, the people young and trendy. As Sara sits down at our table, I notice some people staring at her. No wonder, I’m having coffee with a soap opera star.

Do you consider yourself an artist?

‘I think so,’ Sara smiles proudly as she takes off her coat. ‘For me, an artist is someone who makes a living from any kind of art, whether it’s painting or music. As Goethe once said, the artist is the one who can connect the music, the image, the word and the dance.’

‘Right. I did theatre and I did dance. But somehow, I was always tempted by television. Even though I must admit, television is mostly rubbish. There’s not enough money or time to keep up the level of quality. Or maybe it’s because they think people are uncultured – which is not true, if you ask me.’

Did you have to fight this prejudice? Perhaps people think less of you because you’re in television.

‘People in Italy are not very open-minded, so when they see you in a new environment, they will always have a problem with that. But I have to say, people don’t really think badly of me. My show airs not only in Italy, but also in Canada, Romania and Poland. So I’m very loved!’

Sara has played the role of Adriana in the popular soap opera Vivere for seven years now. Adriana is smart, sweet and good with men, Sara tells me. I suppose choosing her was a fine example of type casting. She’s a beautiful women, and fond of laughing. Whenever she is at a loss for the English word, she giggles, flashing her white smile.

In many northern countries in Europe, famous people don’t always get a lot attention. Being famous is nothing special. What’s it like in Italy?

‘It’s very nice to be popular here. I e-mail with a lot of my fans, and it’s nice to see how engaged people are. When I lost my mother, I got a lot of support from the fans, that’s really nice. Unfortunately, that’s not something that the TV bosses care about. This love that I get is not an element that will get me more work.’

So in a way, you’re punished because your popular

‘Right.’ Sara shrugs her shoulders as if she wants to shake off every negative feeling that comes with this subject.

Your show is viewed in many countries. Have you seen a lot of Europe?

‘I love Europe,’ Sara smiles, visibly happy to talk about this. ‘When I was 21, I inter-railed through the northern countries, like Norway and Denmark. I also went to Spain on the back of my boyfriend’s Harley. I’ve been to Budapest, and twice to Prague. To me, Prague is the most beautiful city.’

Silly question. Do you feel European?

‘I must admit I don’t. I feel Italian, but not European. I guess it’s because we are a confederation. If you ask me, we should feel much more together, not just because we share a currency.’

How come we don’t feel connected?

‘Probably because between the countries, there are too many differences. So people can’t assimilate, they can’t connect. In every country, people behave differently. In the northern countries, they have a strong sense of justice. Something we in Italy clearly lack. I’m an honest person with an honest job, but in every corner in Italy, there’s something that will challenge this honesty. That’s why a lot of people take “short cuts” when it comes to paying taxes. It’s all very corrupted.’ Sara sinks back in her chair, and sighs deeply.

‘It starts in Rome – unfortunately. I live here, and I think the northern people are right. There’s even an historical motivation. When Cavour came to Italy in 1860, he cut all communications with the south of Italy. The south was considered worthless. As a result, the southern people became as they are today. They profited a lot off others; the laziness became part of the Naples-Sicilian culture.’

Some of the Greeks I spoke to told me that they liked Europe, but that they didn’t want to become like the northern Europeans. They said: ‘They know how to work, but we know how to live.’

But still, the south has to deal with all the immigrants coming in – like in Lampedusa.

‘True. But Italy is getting a lot of money to receive all these people.’ From Brussels? ‘Yeah. And I think it goes into some political pockets. The give these people food and water for a few days, after which they let them go. So the politicians get the money and the Italians lose their safety and beauty. In a way, the politicians have sold their country for money. In a few years, they’ll probably sell the Colosseum as well.’

What’s the solution, then?

‘Good question. I think we need a place in the centre of Europe, dedicated to the care for foreigners. It should be paid from all of our pockets, not just by the Italians.’ But where? ‘I don’t know, a central place. Germany, maybe?’

Sara smiles, visibly content with this obvious solution. Germany as the Holy Land for foreigners. I wonder what Juncker would think of this.