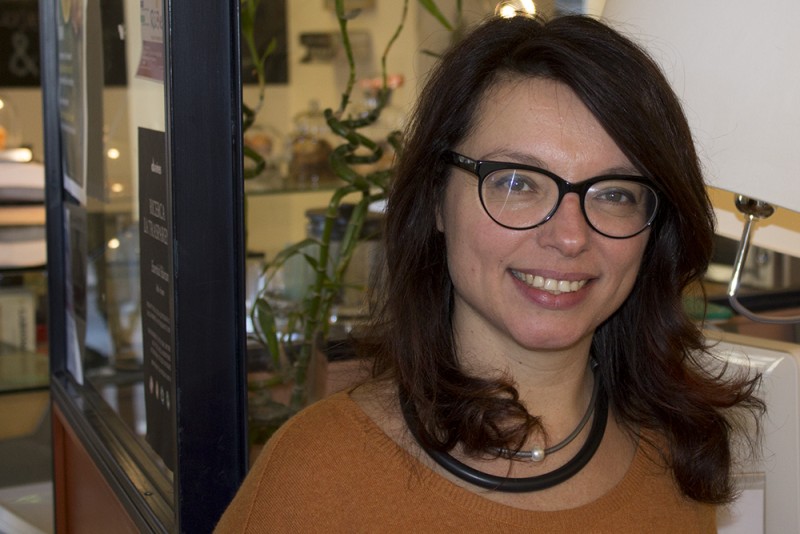 ‘I’m the only hair dresser in Italy who uses special henna to colour hair. I work with a herbalist; he’s seventy years old and has a lot of experience. He has worked for me for the past twenty years.’

So he has the secret recipe?

What will you do when he passes away then?

Capelli Verdi is not your everyday hair salon, as you might have guessed. It’s a hair salon slash shop slash coffee bar, specialized in exclusively green products for the hair and body. The walls are painted in muted tones, and lined with organic products, probably brewed by Sabrina’s elderly chemist.

‘My mother was a hair dresser too, and for 20 years, she had a normal hair salon – not bio, not organic. But after a while she became allergic to the chemical products. That’s when we opened Capelli Verdi, in a small shop in Trastevere. It was my idea to go organic as I was vegetarian for a period.’

Haven’t we all been?

‘I was in Holland in 1993, and that’s where I saw an organic supermarket for the first time. A whole new world opened up for me and I realized this was also an option. This gave me an extra boost to go organic. And it’s not just about the hair, it’s a philosophy for me. It’s about what you eat, how you think. You know? I practice yoga and I meditate, for instance.’

Sabrina smiles. ‘Not every day. I have two kids!’

It wasn’t Sabrina’s original plan to become a hair dresser. She did art school for some years and worked in a graphic design studio. In her spare time, she helped her mother at the salon. ‘When I was 25, my mother broke it off with her business partner. That’s when I realized that one day, this could all be mine.’ She followed training in Rome and London to learn everything about the trade. But not at Vidal Sassoon.

‘He’s a mass stylist’, Sabrina says, shrugging her shoulders indifferently. ‘A hair dresser is like an artist, every client needs something different. It depends on the hair, the personality.’

Going into this project, I expected hair dressers to be simpler. I guess a lot of people underestimate them, but I met some very interesting people. How are hair dressers regarded in Italy?

‘It has changed since I started this project but when I only had my small shop, I felt that people didn’t recognize my work and my skills. Now, I know that my customers appreciate me. And I’m not only an artist; I’m like a psychologist too. Believe me, people tell me things they wouldn’t even tell the priest!’

I can imagine why Sabrina’s clients confide in her. Her dark brown eyes look warm and friendly, hidden behind the black frames of her glasses. She isn’t the super hip kind of hair dresser, but that doesn’t matter. She is the only organic hair dresser in Italy, so she can let her business be her showpiece.

What makes you feel European?

‘We have the same history even though we’re different. I started travelling through Europe at a young age and I loved seeing the differences and similarities alike.’

Of course we have a common history. You – or the Romans – used to rule all of Europe.

‘True’, Sabrina replies. She can’t resist a proud smile, and who can blame her. I’d be too, if my ancestors were Hadrian or Augustus. ‘Who knows, perhaps someone from the North of Europe. Trastevere was a large port in ancient times. People from all compass points mixed together in this neighbourhood.

So you’ve seen a lot of Europe. Is there something else that makes us European?

‘Perhaps the fact that we have the possibility to experience the world. We can easily travel and work or study elsewhere.’

Aren’t you afraid that only the elite can have these experiences?

‘No, because these days we’re more open to others, all of us. It’s because of the internet. I have two daughters aged 10 and 12, and they already know more about other planets and languages than I ever did. Even the guy in the smallest village knows about countries and thus has the chance to change something.’

Italy is in a crisis, like the whole of Europe. In recent years Brussels has urged the Southern countries to change their way of governing. How do Italians feel about this?

‘Personally, it makes me worried. I’m ashamed of our government.’ A long silence follows. Sabrina takes a sip of her tea, her other hand brushing through her henna-dyed hair. ‘We are angry about this situation, especially the middle class. We work hard every day, only to pay a lot of tax. And then we don’t see anything of that money.’

No roads or schools.

‘Exactly. It’s like a collective depression. The people we have in politics now – they’re no good. I guess there’s a spell on Italy that stems from the Ancient times.’ How so? ‘Well, somehow it’s difficult for us to deal with a large amount of power and money. We have a Southern culture from Naples that is very integrated into our society. I’ll scratch your back, you scratch mine. Somehow Italians just love to help each other out, but where it ends – I don’t know.’

Sabrina laughs out loud, breaking the tension. ‘You have to be careful with Italians! But still, I’m positive. We can be European. We can improve.’