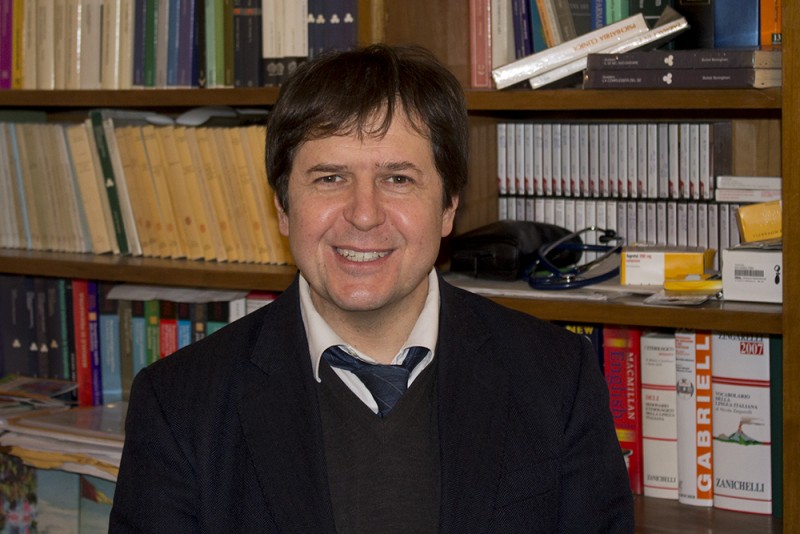 Nicolò is a psychiatrist, who also coordinates European research projects, but it took him a while to get to where he is now.

You had to study for a long time, I guess. You started maybe at 18, and when could you finally say, ‘I’m a psychiatrist’, and start accepting patients? How long did that take?

‘We study medicine for 6 years, then 4 years psychiatry, then as a psycho-therapist, I studied 2 different approaches. One in family therapy for 4 years, the other in cognitive behavioural therapy, with my great teacher Vittorio Guidano, for another 4 years. So, 6, 4, 8 … It was a long way.’

Throughout his learning process, Nicolò did not only rely on scientific sources. He tried to keep an open mind.

‘My personal interests are oriented towards a broader sense of the human being and existence. I remember one of my teachers, who was a priest. I also found some answers to my questions, including existential ones, in the Christian…in the Bible. If you have the chance to gain a deep knowledge of the Bible, you will also understand a lot of overlapping areas in psychological theory. It becomes very interesting.’

According to Nicolò, this knowledge could be useful to the European community. This was a reason for him to set up his own cross-border research project.

‘It could also be used for Europe and for us as members of a community in the broad sense. After this process of deepening my knowledge in this area, then, at last, in 2006, I decided to start a research foundation. It is a non-profit foundation and it is aimed at carrying out research about the understanding and the cure for the most serious illnesses in neurology and psychiatry.’

The project is truly international. With what other countries do you cooperate?

‘We now have an ongoing cooperation with a company from New York. They study electronic signals in the brain. Because I work in an epilepsy surgery unit, where people undergo surgery for the treatment of epilepsy. And this is a chance to study the working of the brain. So that’s really important … Other collaborations are with different institutes.’

But with which other European countries do you cooperate? People from which countries?

‘Usually they are from Germany or from England. They are the most common. They have the best groups in this field. At present we have a collaboration with a group in Austria.’

Nicolò has more to say about Europe, but first: Italy.

And Italy? What kind of patient is she?

‘Italy is a stubborn, old, hysterical woman or an old, stubborn, vicious man. With arrogance. Who keeps on believing that he’s on the right path…That his thinking is the only thing that is important, the only thing that is true, and he keeps on not understanding that the most important thing is to hear others, understand them, and learn from them. Also from young people. Because in Italy, there are a lot of young people, very talented ones. But they are completely constrained and blocked by narrow-minded, ignorant, political money-grubbers, or by academic barons.’

They are not taken seriously.

‘No. The best solutions are ignored. Our managers are a group of delinquents, generally speaking. And they use the communities and the funds for research (billions of euros) for their own gain. They treat the resources as if they own them personally.’

And by ‘managers’ you mean the ones who rule the country?

‘Yes. A special group of operators run Italy at present, and that’s my personal view, I don’t have any proof, but I have been working on this European project for the last 3 years, and I became aware of the fact that Italy is governed by a small group, maybe 30-40 sharp businessmen, who decide and distribute the European resources, funds coming from Europe, with the purpose or intention of increasing their personal power. Also the big funds, billions of euros. And under this oligarchic group, there are the other politicians and the institutions. That’s a critical situation for Italy at present. It’s a chronic problem.’

Nonetheless, things are changing in Italy.

‘Well, something is changing, because we have lots to change. And it’s changing in a good way. For example, for the first time public budgets are being published in Italy. Until 2 months ago, important public budgets for infrastructure and so on were not published. So everybody could do whatever they wanted with this public money. That’s no longer possible. This is happening, so something very important is happening, but we need more time and a lot of courage. And in this time of crisis we should have the patience, Germany and other governments should have the patience to wait.’

Europe can also be regarded as specific kind of person.

‘I would look at Europe as if it were a baby. Europe is a baby, still a baby. And he is starting to understand what to do in the future. Europe hasn’t decided yet if it wants to be one whole or remain divided into different parts. And as a baby, he doesn’t know what he will be in the future. Europe is also a baby, because it is constantly under emotional strain … What happened in France just now…’

‘There is a tendency toward new efforts of destructive forces to block the process of unification.’

So, how can we overcome this tendency? Maybe psychiatry can provide some insights.

‘It’s important for Europe and for Italy to build bridges between different areas of interest and to develop a common language.’

That’s what’s lacking now? The bridges; there’s not really a community. You’re a relational therapist as well. So you may be specialised in building bridges? Do you look at Europe that way?

‘The ability to make people understand each other, to build a new bridge in human communications, is one of most important issues we have. In science, but also in other areas.’

And how could we achieve that? What could we in Europe do to build these bridges?

‘We probably need a lot of time. Because there are a lot of differences and there are social and historical grounds for those. For example, in Italy, the further south you go, the more differences you’ll find, compared to Europe, to the common way of thinking. The way a German person or a Dutch person thinks. In Germany, there is a stronger devotion to the collective. The individual is definitely more devoted to the collective. In the south of Italy, it’s the opposite. It is much more oriented towards the individual.’

Nicolò already mentioned that Europe could learn from the Bible. Maybe those lessons can be used to overcome these differences?