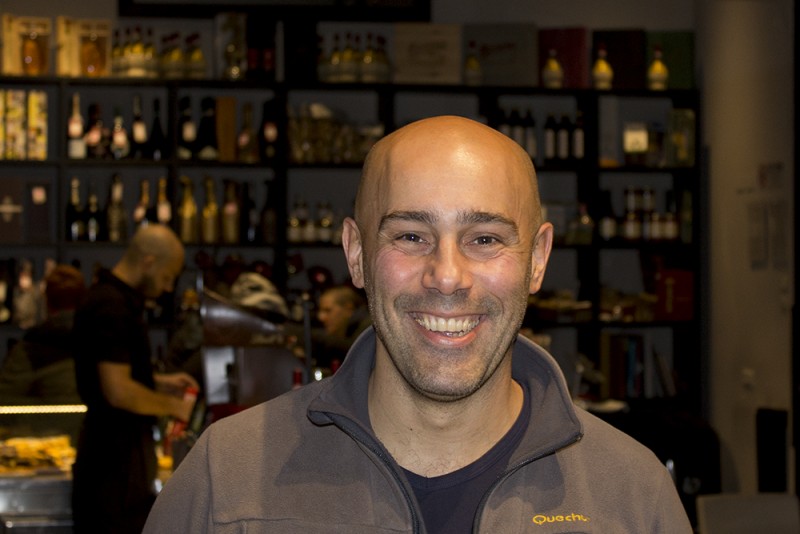 It was a smart move to meet Luca at his place, Baccanale: he welcomes me with a glass of his best sparkling wine (‘better than most champagne’) and a huge plate of antipasti. It’s a nice, bright place smelling of prosciutto, from the hams that are hanging from the ceiling.

He opened the place only last year. Before that he ran a deli, near a cafeteria, and the two of them decided to merge. ‘See, that’s Massimiliano, with the beard, he was the owner of the cafeteria,’ Luca (43) says. ‘There are 15 Baccanales now, in Italy. They have the same layout, the same black and white chequered floor,’ he says in his singsong English with an Italian accent that immediately reminds of mafia movies. He is about to open his second in Rome. on the Via Veneto. ‘A place with 120 seats. This one has 50.’ And tomorrow he’s off to Australia. ‘I already sell them a lot of products, through my other business, a company that exports Italian food, which I started in 2004. But now I go to see if I can open some new branches of Baccanale. A friend of mine, an Italian married to an Australian girl, told me that they have a shortage of good food, of cheeses and ham.’ Enter the Italians.

‘No, I’m never stressed. I think it is because I sport a lot: when I am not working, I run triathlons.’

What was your best time?

Did you stop for lunch halfway through the triathlon?

For a moment he looks surprised, then he realises I’m pulling his leg.

In 5 years, where will you be?

What is it like to be an entrepreneur in Italy? Does the government help?

He laughs disparagingly. ‘It is really hostile: all they want is tax. 57% corporate tax… And it is foolish, because all it does is stimulate a black economy. The banks are horrendous as well. The ECB lends against 0%, so how can Italian banks ask these high percentages, about 13%, from us entrepreneurs?’

What is the image of entrepreneurs in Italy?

‘We are appreciated, for our courage and also because we create jobs – very important! I’m going to hire 20 people in my new shop.’

What are your identities?

Do you feel part of Europe?

‘No. The only thing we saw from the EU, is the Euro. The first 6 months we liked that, but not anymore. In general the perception of the EU is negative. Again: all they want is taxes. Only a small group, the rich people, the cultural elite, can allow themselves an open mind towards the EU. The others, 99%, are against.’

Brussels expects Italy to change, what do you think of that?

‘Is impossible: Italy is an old country… But I agree that we must do something, because we are going to have a huge problem: the working population is diminishing, there are too many old people. And at the same time, these old folks are sitting on their money, while they could help young people with it. Many people stay at home until they’re 40. And this won’t change, not in the short term.’

About Lampedusa. What do you think about it?

‘It is not a problem. The problem is that it is not regulated. Not that they’re too many. You should be only allowed into Italy if you have a job. We should send the others back home, like in Australia.’

‘Absolutely. But they’re not.’

If you were the boss of Europe, what would you do to make it work?

‘I would help families; build houses for them – which is really difficult in Italy. Too expensive, and that is why people are reluctant to start a family. And create jobs. These two elements are the foundations of a healthy society. Now it is built on crime and drugs.’