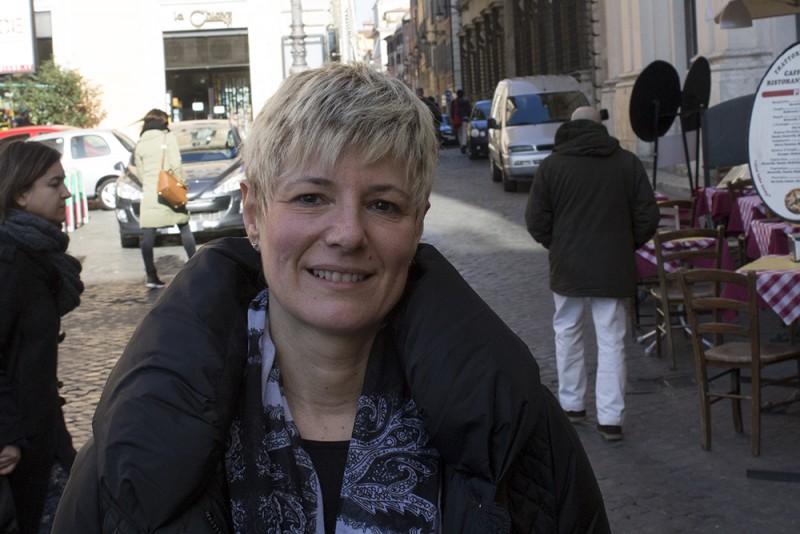 ‘Did you check out my site?’

Of course, I say.

‘Then you may have also seen my matrix works, the vaginas. I wanted to show how they have been depicted over time. Not in the way that someone like Tracy Emin does: shocking, with a lot of blood, but more poetic. I wanted to illustrate female beauty, so that women will be more respected. Galleries tend to choose male artists.’ And that is why Laura exhibits her work – usually installations – in unusual places, often in institutions.

But how do you sell them?

‘Mostly via collectors, people who know my work and follow it. It’s good because I can work without having to compromise.’ Especially since her marriage 10 years ago with one of her biggest fans.

‘I have known since I was 7 that I wanted to be an artist. But when I reached 18, I didn’t expect to be able to earn a living from my art, so I became a fashion designer on the side, which I have been doing for 25 years.’

How do the Italians, who so used to beautiful art, view the artists themselves?

‘Italians love all art, including contemporary art. There is respect for art, but not for the artist. Unless you’re very famous, of course. It has nothing to do with the quality of the art, everything to do with marketing. I am creating an oeuvre, not thinking about what the market wants.

I am interviewing Laura in Dutch, because of her bilingual background: her father is Italian and her mother is Dutch. ‘I feel I am half and half. My mother spoke Dutch to me, and for a long time I didn’t want to learn Italian at school. My upbringing was very Dutch.’

‘Yes, but also in terms of the mentality. For example, I respect the rules. I park in a parking space and I pay.’

Are you still a foreigner?

When does someone become Italian?

‘My sisters’ son and daughter are Italian. So are my sisters. I’m not, but that is because I’m doing something different: I am an artist. You know, in Italy every region has its own identity – the country hasn’t existed for that long. When I started working in textiles, I worked with a lot of people from the south. They were regarded as foreigners.’

But are people racists? Or welcoming?

But Balotelli gets bananas thrown at him.

‘Yes, but that’s football. When I was working in textiles I noticed that on the work floor, you are no longer African or Chinese, because then you know each other, then you are colleagues, and it’s fine. But someone you don’t know is a foreigner. Where I lived in Prato, near Florence, there are 30,000 Chinese in a fairly small community, because of the textile industry. They came illegally and many of them have set up production operations and have taken jobs away from Italians. There people say, Africans are no problem, but the Chinese… they spit on ground and they kill cats and hang the skins up to dry.’

‘No, because it smells. It has changed the city much too quickly. People feel they should have contact with them, but it is difficult because they don’t speak Italian. But has it led to incidents? No, it’s civilised, limited to verbal exchanges.’

And Lampedusa? How are Italians responding to that?

‘It is a big problem. But the people who come do not want to stay here, but move on to the north; there is no work here. But I think that the people in those regions – Puglia and Sicily – are behaving fantastically well, despite the problems and the horrors they are experiencing. What do you think it’s like for the fishermen who find a body in their nets? But they are really trying to help.’

What should Europe do?

‘If those African countries were as rich and politically stable as Europe, the people would not have to flee. I think it is easier for big multinationals to do business with dictators, while some things are harder to accomplish with democratic governments. Europe can help, not with soldiers, but in other ways, although I don’t exactly know how.’

She is very positive about Europe. ‘More cooperation is our future. And it is natural: we have a lot of shared history, there are many things that bind us. And all those different languages? Well, all those regions already speak different dialects. On Sardinia they speak Catalan, in the south there are Arabic influences and in South Tirol they speak duts. You’re not losing an identity, you’re gaining one.’

How popular is the EU in Italy?

‘It varies. Less so right now because the EU is imposing economic measures that people think are unfair. But is the fault of our own politicians, not the EU: they failed to provide adequate protection for our Italian products such as cheese, and also fashion.’