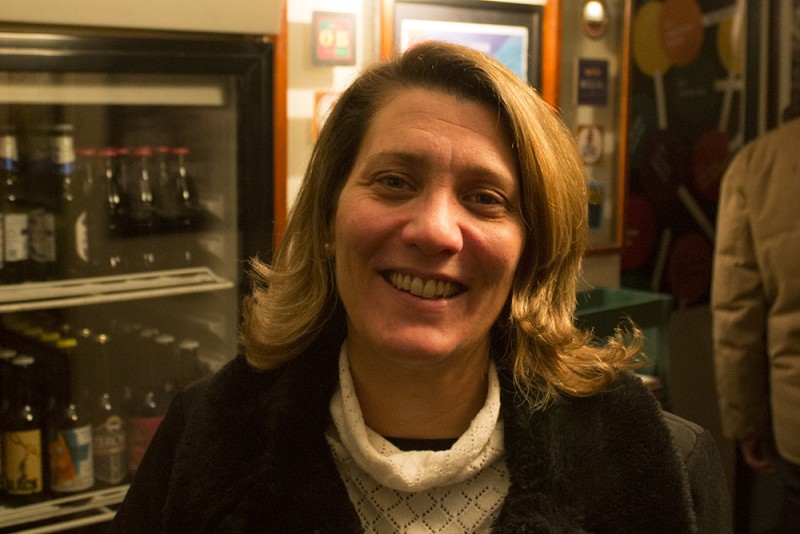 ‘I have two passports, Italian and Dutch. My motherland is Italy, and my fatherland is the Netherlands.

‘I can’t have two fatherlands. But it could be the other way around. I no longer feel at home in the Netherlands. I once read something interesting about emigration in a book, which is that once you’ve done it you never really feel at home anywhere.’

Is that hard for you?

‘Yes, sometimes it is, Helvia says. Now 42, she emigrated from the Netherlands when she was 28, just after marrying her then husband, an Italian. She had met him 8 years before that, when she was working as an au pair in Italy.

Can people tell you’re a foreigner?

‘No, the Romans think I’m from Northern Italy, and non-Romans think I’m from Rome. It can be a disadvantage, because sometimes I still think like a Dutch person; I am very direct and people can find me surprisingly aggressive. Italians are thought to be aggressive, but it’s all smoke and no fire, while the Dutch can be just the opposite. When I worked at the Dutch embassy I was once accused of having become too Italian.’

What did they mean?

‘Too cheerful and expressive, I was not serious enough. And I sometimes contradicted my superiors. It’s funny, because when I’m in the Netherlands, I act more Italian; I worry less about all those stupid little rules.’ I have been around Helvia for a few days now; she has been a great guide to Rome, and to me she seems very Italian. Especially in the car: honking, shouting, and of course parking wherever she likes. Just now, on the square in front of the coffee bar where we are sitting, she explained to me the concept of the seconda file: the second row of cars parked right behind – and therefore blocking – the first row. To extricate your car you honk your horn until the owner of the car blocking yours comes to move his or her car.

Is it hard to be Italian? Are you a fully-fledged citizen?

‘Yes, although I sometimes have a hard time understanding someone who speaks with a regional accent. Or I don’t understand certain expressions. But I’m not free to criticise the country. At school, for example, around the other mothers. They look at me like “why are you here then?”. It may be a crappy country, but it’s my crappy country. But when I tell them I have been paying taxes for 15 years, and have had to swear an oath on the flag of that crappy country of yours, it shuts them up for a while.

You are a European immigrant, one of very many more, including many from poorer countries. How are they treated?

‘Well, in the North, I’ve seen them treated like dirt. Here in Rome people are more indifferent, good at looking the other way. But sometimes they don’t. I experienced that a few years ago, just around the corner from where I live. A couple of busloads of refugees from Lampedusa were dropped off at a fenced-in area. It was an extremely strange situation: politicians showed up, the locals came around to jeer at them, and some of the refugees made a hole in the fence so that could escape and flee elsewhere. It’s a difficult situation, and Italy is not up to it; there are simply too many of them. It’s easy for the rest of Europe to criticise: they don’t have to deal with them. I can understand why the Italian government gives them 500 euros and tells them to leave.’

And of course we talk about the Mafia. Helvia says it leads to more bureaucracy. ‘Where the mafia is so strong, everything has to be written down in black and white. There’s a call for an extra law, or an extra form to fill in. You need to fill in a form or stand in line for everything in Italy.’

Will Italy ever be free of the mafia?

‘No, I don’t think so. Other countries call it corruption, here it’s the mafia. I think it’s the same thing. The world will never be free of it; it’s human nature.’

There’s no corruption in the Netherlands, I protest.

I don’t agree. It’s not visible in the Netherlands. Everything works properly: roads, education, rubbish collection. If someone is pocketing a big share of the tax revenue, it is harder to detect. In Italy, I pay my taxes but I don’t get anything in return.’

And Europe? ‘That’s the continent I come from. And when I visited my sister in New York, I found out that being from Europe makes you interesting. It don’t notice it in my daily life. It was convenient that as an EU citizen I didn’t have to apply for a residence permit, but I still had to apply for other things and make a lot of arrangements. Transferring my marriage certificate, for example, was a nightmare. They checked whether it was a fake marriage and made me wait in line with a lot of Moroccan couples. And when I started work here I had to apply for an employment document before I could sign a contract. And I don’t think it has become any easier. At the embassy I saw all the problems that Dutch people had with the administrative rigmarole.’

What do Italians think of Europe?

‘They think I’m crazy to be still living here, because “you could leave if you wanted to”.’

‘Something like that. On the other hand, they hate it when Brussels tries to impose something on them.’

How much effect does it have on their lives?
‘I see it at school: my children are suddenly being given something called European diplomas. My friends in the Netherlands, those who work in education, have never heard of them…’

Is Europe an issue in Italy?

‘No… Brussels is too far away. Italian politicians in Brussels are sometimes ruthlessly satirised in TV programmes, which portray them as doing nothing but sitting in the European parliament for an hour or so a week. This is seen as scandalous.’