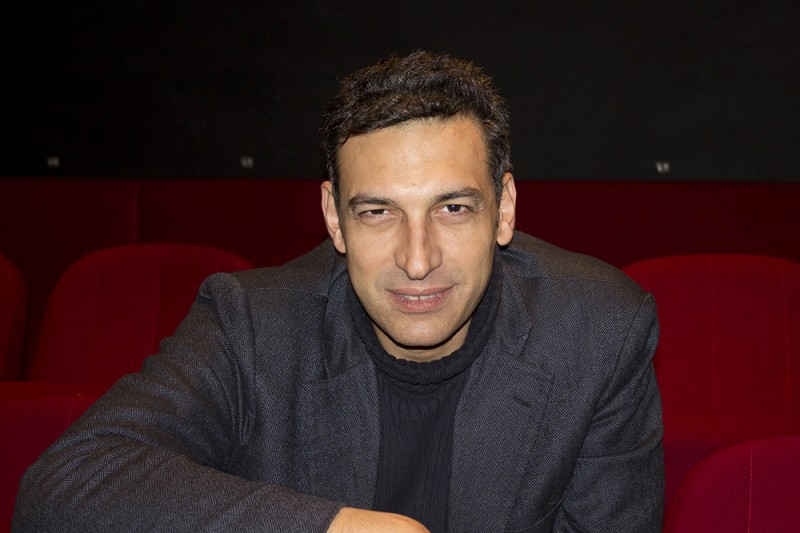 The Teatro Belli is easy to miss as you’re walking through the streets of the Trastevere neighbourhood. The small sign and simple wooden doors are not what one would expect when going out to see a play. However, the little theatre hall inside exudes old-fashioned drama. On the small wooden stage, facing 120 red velvet chairs, Francesco rehearses for his role in Molière’s play Le Intellettuali.

What’s it like to be an artist in Italy?

‘It’s quite difficult. A mission, almost. These days it’s incredibly hard to start a career as an artist, especially in theatre. There’s no money, every year the government cuts more and more, in music as well. It’s a crazy thing to imagine that in Italy, the country of melodrama, there’s less and less money for operas. But still, it’s the most beautiful thing to do in life’, Francesco adds, beaming with pride.

‘Right, a big passion,’ Francesco replies, emphasizing the first part of the word. ‘Everyone has a passion. And to see passion in front of you, changes something inside. Passion makes you able to give something to other people, to make them grow. And I think that’s something that can change the world.’

‘Well, perhaps not all for the better’, he smiles.

In the past year, Francesco travelled through Europe with three well-known rock musicians, Niccolo Fabi, Max Gazzè and Danielle Silvestri. He met them in a bar named Il Locale – the Place-, which Francesco liked because of the number of girls among its clientele, he admits with a boyish grin of his face.

‘They began working together at this time, so I called the documentary Locale e Europa. The theme of the documentary is them talking about why they left Italy. The most important reason was to have more space to make their dreams come true. So many Italians went to college, only to find out later that they could never become what they wanted to be. So they leave, it’s “immigration 2.0.” In the fifties we had the first wave of immigration, now it’s the people who’ve studied who leave.’

‘Right. And people with children too, because of the social security. I had a friend whose child had to go to the hospital a lot. In Italy, you have to know people to get something done. Otherwise, it’s very complicated. It’s like a mafia culture.’

‘Exactly, nepotism. If you have money or contacts, things are easier. The hospitals are good, but they simply do not have enough money to help everyone.’

For your documentary you’ve done a lot of travelling. Do you think there’s something typically European?

A long silence. A frown appears on Francesco’s face, he caresses the red velvet of the chair in front of him. ‘We probably have in common a sense of freedom, the freedom to be who you are. So we have a common cultural origin. And Schengen is wonderful. We toured all over Europe in our minivan, and only in Switzerland did I have to show my passport. And from England to France, of course. It was a very tough passport control there. I had just gotten a new passport and there was a little bit of glue on it. I missed two ferries because of that.’ Francesco grins at me.

Couldn’t you just tell them that you are a well-known actor?

I’m not sure whether this modesty is genuine – or justified, for that matter. In Italy, Francesco’s resume as an actor in movies and plays is impressive. But his success extends beyond the Italian borders. He was cast in Bertolucci’s movie Stealing Beauty, alongside stars like Liv Tyler. ‘Italy is very far from Hollywood,’ Francesco explains when I ask him about his American adventure. ‘When I first went to Hollywood for a job I was 25, and I was like “wow”. My character in the movie was Italian, of course. I quickly realized that the only way for me to get a role was to play “The Italian man”.’

However disappointing this realization must have been for him, I have to admit that he looks the part. His deep brown eyes have a distant dreamy look, which undoubtedly works well with the ladies. There are a few grey strands in his black wavy hair, just enough to give him a look of distinction. And of course, he’s wearing a turtle neck with a suit jacket. Un bell’uomo.

America has its American Dream and its symbolism. Europe doesn’t have that.

The Americans have the American Dream because they have so little culture. Building a dream means building a new culture. Here, we have such a strong identity from the start. Our grandparents had the European Dream. Nowadays it’s easy to travel around Europe without showing your passports, and the new generations in Europe have a stronger bond with each other. They have the opportunity to build a new European dream, to be one Europe. The music, literature and art have mixed so strongly in Europe because of the old Romans and Charlemagne. Churches in Northern Europe may look different, but you still see a bit of Italian architecture.

You might say that the Roman Empire was the first European Union. Do Italians see it that way?

Well, I don’t know. But probably, the Romans at that time had a vision. Probably for the same reason as Brussels; money. But Brussels respects the culture of the people, while the Romans didn’t. And I think that’s the only way European identity can grow, through culture.

I agree. We have an economic and political union but in order to cooperate we need more trust. And how can I trust you if I don’t know you? If we want to improve the economic situation we have to work on cultural cohesion.

Exactly. Look at the Chinese immigrants. Usually they don’t really integrate, they stick to their own culture. In Rome it’s different, perhaps because of the strong identity we have. Only in Rome the Chinese people speak Roman slang. I mean, have you ever seen a Chinese Yank?