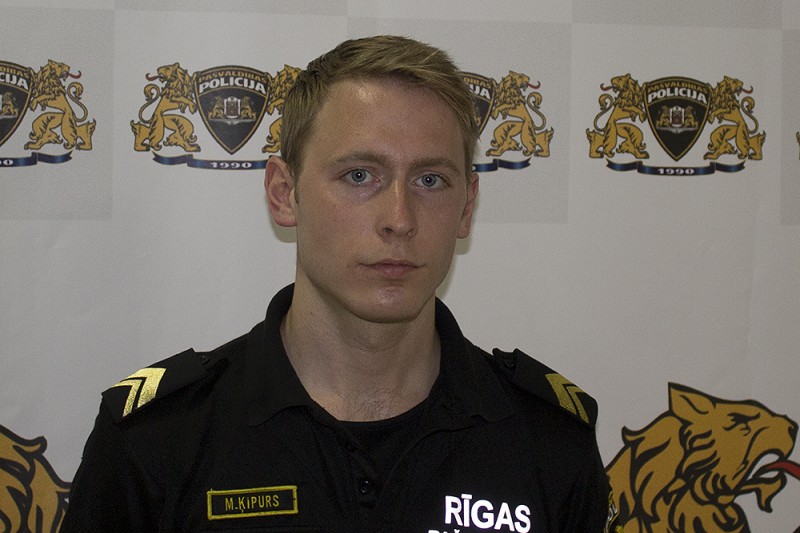 Latvia has been in the European Union since 2004; this has brought a lot of prosperity and security to the small Baltic state, but also binge drinkers and party people from the rest of Europe. 25-year old Martins is the acting chief inspector of a special tourist unit that was set up in 2009.

‘Tourist police. Sounds special! Why was your unit created?’

‘Because there were so many tourists from the United Kingdom coming here on cheap flights, looking for cheap drinks and nightlife. They thought this was a third world country; at least they acted that way. But now they understand we are here and we are not only helping them, but also controlling them: if they behave like hooligans, they will be punished. We operate in the old town, where most of the tourists are. The situation has changed now and I like it that more intelligent tourists are coming here, looking for good restaurants and looking at our beautiful buildings.’

His English is quite good. ‘Where did you learn to speak English?’

‘I learned it in school and university, but mostly by listening to music and watching movies. I’ve been in England as well for a summer job when I was eighteen. I studied English there as well.’

He had studied to become a marketing and sales specialist, but then changed his mind and joined the police instead. ‘As a policeman I’m helping my own community – I can make a difference right here in my own city.’

‘That’s important to you?’

It is, somewhat to my surprise, the most important thing to almost all of the police officers I’ve spoken to so far.

‘What do you think of the European Union? What does it mean to you?’

‘My opinion is really positive because now we have a new currency, the Euro. This is very good for our merchants and businessmen, so we can trade and we no longer need to change our currency. We are a country of two million people in a small territory and we cannot stand alone. We are stuck between east and west: we need to choose a side. And our decision in 2004 was to join the EU.’

‘Even if it costs you money because of the crisis?’

‘It was a worldwide crisis, so maybe it would have been even worse if we weren’t in the EU. It was a bad time for the government, because they made unpopular decisions, budget cuts. They had to and it is good that our society is patient. They didn’t go on the streets rioting, they understood and accepted it. Now I hope we are one of the fastest-growing economies of Europe because our economy is stabilizing.’

‘How do you know all these things?’

‘Could you define what it is to be European? What makes you different from an Asian or African?’

‘What are these values?’

‘It is hard to answer but I think Europe is all about people. The people come first in our democracies. In the East it is a bit different.’

‘What should Europe be like? Should it be a united nations of Europe like the United States of America or just a economic union?’

‘Well, looking at the world as it is developing, I think we need to be united economically, but that we should also have a European army. At the same time every country needs its own culture. We need to build this one united Europe with the consideration that every country is different.’

And that is the EU’s official motto: United in diversity.