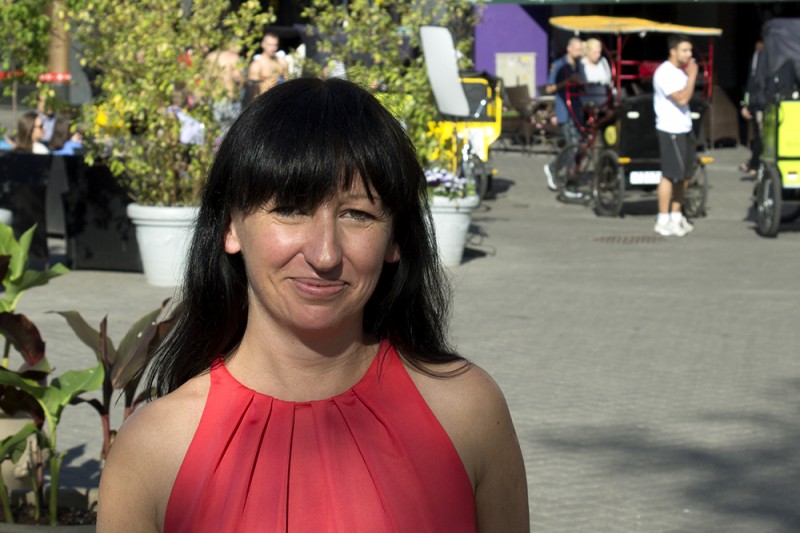 She’s seen quite a bit of the world: born and raised in Dublin she moved to Australia at 24, and then to New Zealand and Poland. In Radom she had her first teaching job, but experienced life there as ‘awful’. When after nine months a job for an English teacher opened up in Riga, she did not hesitate to accept it. An odd move, as many Latvians (and residents of other Baltic states) go the other way, but she is one of the few Irish here. ‘It was a little bit hard to get things started, because the job wasn’t full-time, so I freelanced for three schools and had my own private students as well. Now it is actually taking off, so that is nice,’ Linda says. She’s unmistakably Irish: she has a great laugh, is quite funny and is a bit hung-over when we meet on a Sunday afternoon (because as we all know, the Irish get really thirsty at times).

On her blog she shares her Latvian experiences with the rest of the world. They are not all positive, something not everybody appreciates. ‘A lot of Latvians like to complain, but for a foreigner to come here and complain about things, that is not done. When a Latvian news portal translated one of the articles I got some really nasty hate mail,’ explains Linda. ‘But,’ she adds with a smile. ‘Nobody threatened to kill me, so it could have been worse.’

‘Do you still feel welcome here?’

‘Yeah, I do. I do not feel particularly out of place. Obviously I got a lot of reviews on my blog, but never in my personal life. Then there is more curiosity, why someone would move from Ireland to Latvia, but after Poland I just wanted to go to a capital city.’

‘When I came here the school paid for the apartment, but then I started for myself and that meant that I also had to pay for myself. The rent was high and in the winter there was this crazy system that you cannot control your own heating. Sometimes I sat there wearing eighteen layers of clothing.’ This story is just one thing that reminds people of the communism past. Not long ago, they opened the KGB house in Riga, where the Russians tortured the Latvian people. But there are other reminders as well. ‘If you go twenty minutes in just any direction from here – we are in a bar at the centre of Riga – there is so much grey and grim.’ This is to due to country’s history, in which the Russians played such a big part. Nowadays, Russians are an ethnic minority in the country and it is not easy for them. ‘I know enough Russians who can speak Latvian, but they always get an English response. The weird thing is that then the Latvians say the Russians do not want to learn the language and culture.’

Immediately Linda starts to laugh. ‘To me they are a little friendlier, a little more open then the Latvians, louder. Latvians are naturally suspicious and quite introvert but when you get to know them, everything is okay.

Obviously, life in Riga is not exactly the same as in Dublin, but many items of clothing and electronics have the same prices as in Ireland. ‘Latvians have a quarter of the wages in Ireland, so they must have to save up a lot. Their everyday job, then, is not enough, but with work in the evenings or weekends they just have enough money.’ Also, the attitude of people is a lot different. Where the Irish are very friendly and open, people in Soviet countries can be very cold and reserved. ‘Here it is difficult for people to be open, walk into a room and talk to everybody. They tend not to do small talk and they are straight to the point. But at the end of the day, everyone wants the same: to be happy, that is. Make a little bit of money, travel, see things. On the surface, we are quite different, but underneath people are people.’

‘In Ireland, people do not think they are the same as the rest of the European Union. ‘We constantly talk about “The Continent” and we think that everybody is sitting around with nice clothes and sunglasses. That is Europe for us. In Ireland, everyone is in the pub, drinking a pint, whereas in Europe they drink those little coffees,’ Linda explains.

The European Union means a lot to Linda, not only that she can travel so easily. ‘Here it feels like the centre of the world, there is so much to do. I feel at the heart of things here more than in Australia, for example, and I feel more at home here.’ This is why she ‘definitely’ considers herself as European. ‘I guess here, in Latvia, I feel more Irish, but when I am in Dublin, I am European.’ And then, again, that laugh.