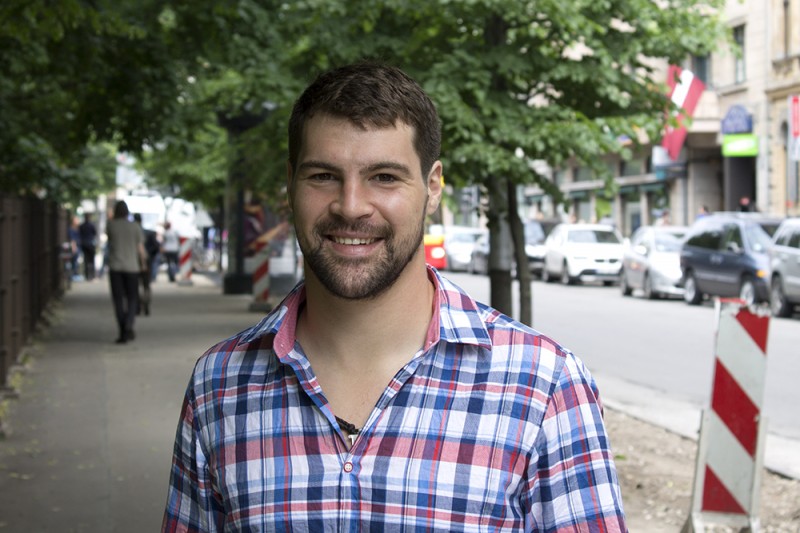 Given his muscular build, it should come as no surprise that Kaspar Daugaviņš is a professional athlete. Ice hockey is the number 1 sport in Latvia and this guy looks as if he could easily pass the physical exam. Although his physiotherapist might disagree after his visit today.

‘My shoulder is bugging me a little bit,’ says Daugaviņš as he points out the sore spot, ‘the same one I had surgery on six years ago. But I can still do everything.’ Winning the Calder Cup with the New York-based Binghamton Senators is just one of the highlights of his career. He earned € 700,000 a year as a player for Servette in Geneva. Here in Riga they know him as one of the heroes of the Latvian national team.

‘The World Championship just finished and soon I have to start training for next season.’ He seems visibly disappointed when he explains that he has to leave Latvia again in mid-July: ‘It’s only a short break.’

Playing in the famous American NHL is a dream for every player, but the ice hockey champion would rather stay in Europe. ‘The traveling time to matches is huge. It was nice to play in Switzerland, because it’s small. We could easily jump on a bus and arrive three hours later.’ Which was different to North America where he had to fly everywhere.

‘I played for Dynamo Riga here at home,’ he then sighs, ‘the travel in Russia was crazy.’ As player in the Russian league KHL he had to travel across 11 time zones. ‘In the NHL planes are rented for the whole season. We all had our own seats and good service.’ The Russian league was different: no business class, just regular planes. ‘It was hard to sleep on board.’

‘Apart from the standard of a plane, do you prefer Europe or North-America?’

‘I feel more at home in Europe,’ he admits, ‘it’s closer to me.’ But he has no choice, as the level of professional ice hockey is much higher in the USA and Canada. Living there is not an option for him though. ‘It’s hard to explain why. When I leave Europe, I miss my home.’

‘Try; what is it that doesn’t make you feel at home in America?’

‘Maybe it’s because people in the States plan their future ahead for, say 15 years. They say: next year I’m going to finish this, to be this, then this and that. They live like that, but forget to live. They forget to have fun.’

‘Europeans are cooler. They work hard, but go to parties and big family get-togethers when they’re off.’ Drinking a beer in the streets and getting loud every now and then is not very American, according to Daugaviņš. ‘In the States cops will arrest you right away for just having fun.’

‘You get a lot of tourists from the UK arriving on cheap flights in Riga, aren’t they annoying?’

‘When the Eurocup was held in Germany, there were about 100,000 English football fans here and they were crazy! Sometimes they got stupid and started fighting. Nobody wants to get beaten up.’

‘Yes and we knew that they were going to pick fights. But the police was ready in all the places where they were drinking beer. Screaming and shouting is ok; everybody knows it’s in their blood to be football fans.’

As a sportsman he understands their devotion. Daugaviņš started playing ice hockey when he was 10 years old. He has been travelling ever since. Although most cities have comparable structures – with an old town and nightlife, the business area and places where the rich and poor live – he finds Europe far more diverse than North America.

‘It’s our history. There’s always something to show people in European cities.’ The Canadian family that took care of him when he lived there came to visit Riga. ‘I could show them around for weeks.’ He explained to them how the city was an important battleground between Germany and Russia during World War I. ‘There’s so many countries in Europe, while in North-America there are only three.’

‘Do you think it’s a good thing that Latvia joined the EU?’

‘Everybody in my family was happy. I was still quite young when it happened and never a big fan of politics. But I think it’s easier for people to survive nowadays.’ He sees that Latvians can start new businesses or study abroad. Also his wife’s family of farmers benefit from the EU. ‘They work hard, but now have opportunities to make a decent living. EU countries open their markets to each other. I think that’s a good thing.’

‘Are EU countries not too far apart culturally?’

‘It’s hard to share everything you have. The richer countries don’t want to give everything away.’ But then, with more conviction: ‘They have to come up with a plan in which everyone would be better off. European businesses have to figure something out too. Businessmen know how to make money and make economy better.’

The different cultures in the ice hockey teams playing in North America find their own way to interact. ‘On my days off, I used to hang out with a Russian player. If you can understand each other speaking the same language you become friends. Before, I knew him as a superstar. But he didn’t act like one at all, once I got to know him.’ He describes the teams as families with just one important rule: in the dressing room you speak the same language.

Both Latvian and Russian are common languages in Riga and despite the country’s recent history in the Soviet Union that has never caused problems, according to Daugaviņš. ‘In the countryside there are cities where people don’t understand Russian or Latvian. In Riga it’s probably fifty-fifty. At least it’s that way in the national hockey team. We joke around in any language.’

‘No fear of a Russian invasion, like in Ukraine?’

‘Russia is powerful and people talk about what’s happening in Ukraine. Latvia has been part of so many countries, so we know how it is. It happened before and it can happen again.’ Meanwhile he tries to live like nothing’s going to happen.

‘Things have changed from the way they were 70 years ago. I mean; what could Latvia mean for Russia today?’ He used to play ice hockey in Ukraine, so it’s tough to see what’s happening there. ‘Nobody wants a war! I love to read history where they fought with swords. Now it’s like: boom, boom, boom!! And the next day it’s over.’

‘And Russians are still your friends?’

‘On the streets you can ask any Latvian and hear he’s friends with a Russian-speaking person. I play golf with a lot of people who speak Russian. We’re always good friends – we laugh and make jokes.’

‘Russian, Latvian, anything. If I don’t know a word in Russian and he doesn’t understand me in Latvian, I tell him in English and he’ll know what I mean.’