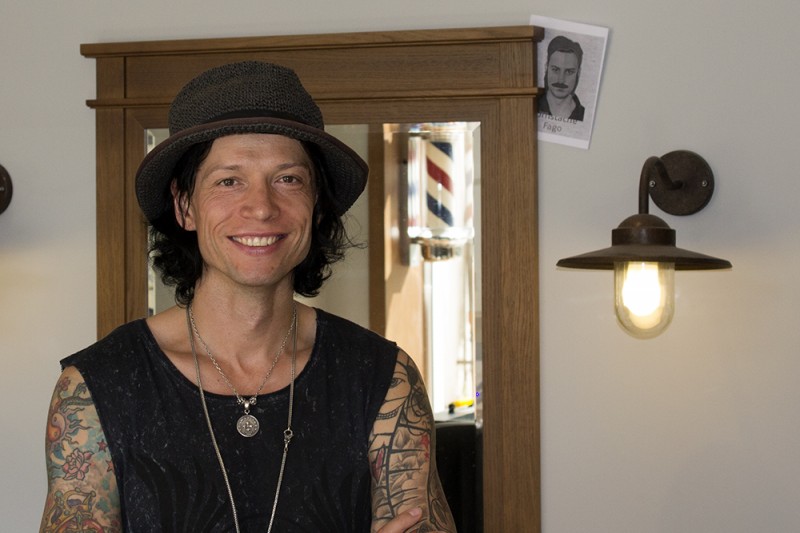 Ivo works at Chop-Chop, a chain of barbershops. ‘The largest in the world’, they boast on their website. The original shop is in Moscow and now there are two dozen branches ‘in Russia and in the former USSR’. This might be true, and not such an achievement after all since 99.9% of all men shave at home. But the staff at Chop Chop also cuts hair, but not women’s hair ‘no matter how persistent they are or how pretty.’ It is a man’s world, Chop Chop, the kind of place where you’re invited to have a shot of ice-cold Jagermeister, before or after getting a haircut.

I’m meeting Ivo, ‘the master of the wet shave’. So I’m lying in a chair, cream on my face, while he is carefully shaving my 4-day beard. ‘I used to go to Rotterdam all the time,’ he says. The background music is reassuringly male: Pearl Jam and Bob Dylan. Ivo – hat, lots of tattoos – looks like he could be a bass player in a rock band. ‘That was when we lived in Brussels, some years ago, when my wife was working for the EU as a translator, from English to Latvian. Now she’s a dance therapist. We lived there for 6 years. Didn’t like it.’

‘Really? Even though it is a really international place?’

‘Yeah, and here it’s just Latvians, Russians, some black guys playing basketball, and some Chinese restaurants. But it’s not a nice place for guys who look like me. If you’re 50, 55, then you fit in, in Brussels. I used to go to Antwerp as often as I could. Or to Rotterdam. Here in Riga it’s much better. Here I can do more things. I can start new things, because many things aren’t here yet.’

‘Don’t know yet.’ He talks in a low voice, not looking at me, but concentrating on my beard. ‘I love my freedom. I like it that if I don’t know what to do on a Friday or Saturday, I can hop on a plane or train.’

‘It was bad under the Soviets. Couldn’t do anything. Didn’t have anything. No products. I remember seeing Coca Cola for the first time. And bananas. Oranges. In those days, you got a banana if you had a friend on a boat maybe, a sailor, who was able to nick some for you. Don’t talk now.’

He’s shaving on my throat.

‘Aren’t some people a bit scared when you shave them with these razors?’

‘You need to be relaxed. Americans can relax, they even start sleeping when I’m shaving them.’

Clapton sings Layla, while Ivo walks away to get another special cream.

He picks up the phone from time to time, keeps on shaving.

‘No. I feel Latvian. This is home. But I like Europe, to be able to travel freely.’

‘Has it not become too expensive because of the euro?’

No. On most price tags you see both currencies, the lat and the euro. It’s the same.’

‘So that is why you returned from Brussels, because it’s home?’

‘Yes, and also because our children are school-aged.’ He tells me about his son, who is 11. A good football player. ‘Maybe someday he’ll get a good contract, then I won’t have to work anymore. Riga is a nice place. Still, a lot of Latvians are living abroad, but many come back. Food is better now here. Chicken is a real chicken, not filled with water. It’s also much easier to be a vegetarian: everything is healthy, more natural than in Western Europe. And did you know that when Latvians come home from abroad, maybe for summer holidays or something, they all go to see the dentist and the doctor.’

‘It’s cheaper. And better. Belgian doctors immediately prescribe antibiotics, but here the doctor gives you something natural. Something from the woods.’

In the background, the Rolling Stones are extolling the virtues of Honky Tonk Women.