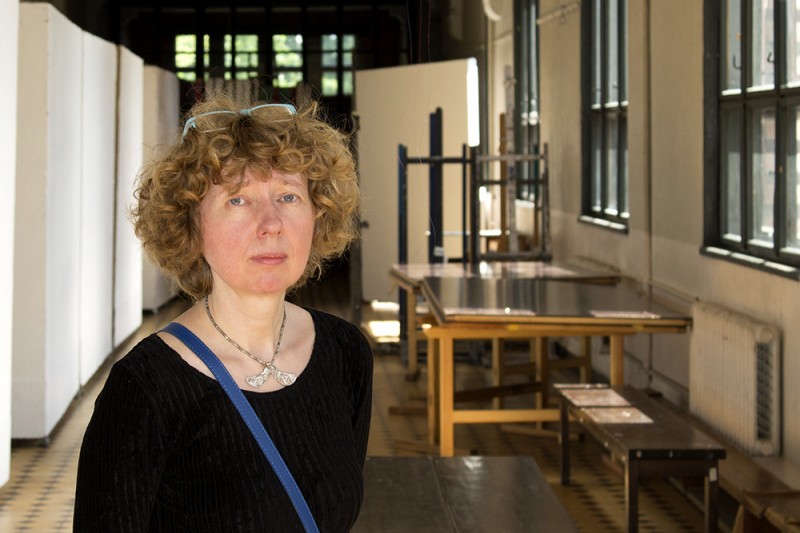 She is an art professor and an artist, a textile artist to be precise, head of the Riga Art Academy Textile Department. ‘We are not very big, and not very famous, we have only 40 students. They learn the craft, learn embroidery, classical drawing and painting, but also some art history and philosophy of course.’ Ieva is 50, soft-spoken and thoughtful. The interview takes place in her office, in the basement of the academy, which was once a secondary school. Her room is full. The walls are crowded with bookcases and tapestry – of course – while a large rectangular table with 8 chairs eats up most of the floor space.

‘Nobody needs artists, in general,’ I say. ‘And at the same time everybody needs them.’

‘Yes. But nevertheless I haven’t seen many desperately unemployed textile artists, who have nothing to do. Everybody finds his place, in design, in interior design studios. They’re creative and create a living.’

She thinks for a moment, then continues in her sing-song, Baltic way of speaking: ‘Society needs people who have this knowledge about material and the ability to work with it. And all these materials – silk, wool, and leather – have an inner intelligence. Professionals who can create something suitable or artistic, we need them.’

‘But do we need good craftsmen or good artists?’

‘Both: good artists always have had craftsmanship. It’s part of the job. You know that during the Soviet-period it was much better of course for us artists? The government paid a lot for enormous and representative tapestry; they spent quite a lot on art in general. A lot of artists could really live only from their art. It stopped of course in ’91.’

‘So it was good for art, but probably not for artistic freedom?’

‘No, artists were organised in artist unions. This had only one purpose for the government: to control them. But to be able to control them, they had to be fed. Just a little bit. So you lose maybe your originality somehow, but you could make a living. Of course the system was cruel and repressive, but it was double-edged: on our side we were pretty polite and we kept silent, while we tried to keep our inner freedom. The two sides were in conflict. The money came from Moscow and artists were forced to do something they didn’t want to do.’

‘And now you’re free but poor?’

‘Yes,’ she laughs. ‘In Latvia only 2 or 3 artists make a living based on textile art…’

‘No, not really. They help schools, and students. In fact the Erasmus Programme, the EU students exchange programme, is one big reason why students and teachers should really appreciate Europe: it allows us to travel, to exchange knowledge, to learn, to visit exhibitions. Teachers as well.’

‘Riga is the Cultural Capital of Europe this year. What does that mean to you?’

‘It means a lot of visitors, people interested in Latvia and Riga art and culture. We think we have a lot to show: great choirs, classical music, opera, visual art. For example, I was asked to make a big tapestry dedicated to this year.’

‘And about Europe, is there a specifically European way of acting or thinking?’

‘I like to think so… it’s openness, transparency, it’s based on classical values and culture, on Greek philosophy, if we step back and explore our roots. On the other hand, comparing Europe to Asia, we don’t value our ancestors as much. There one always listens to the teacher, never doubts him, while my students might think, oh she’s old, what does she know? Here we put more trust in our own experience, and while your mistake may be painful, it is your mistake and it will help you in the end.’

‘I feel Latvian. It’s in the corner of the continent, maybe a bit forgotten. Sometimes I think that we are not that developed, which is true. And not so educated – also true. But we are closer to nature.’ Latvia has only 2 million inhabitants, half of them living in Riga. Most of the country is quiet, covered by forests. ‘Maybe we have more inner knowledge. We are Christians, but we also have our pagan side. Now, June, is the time of year that many Latvian girls will go to the forest in search of teas, plants, herbs, which they think will help fight different diseases.’

And of these 2 million, 40% is Russian-Latvian, whose grandparents had been sent to this part of the Soviet-Union to work in factories, but never left. ‘How is the relationship between the Latvians and the Russian-speaking population?’

‘It’s not always easy. They want to live here! I have very good Russian colleagues and students, but they are different, they have a different mentality. Maybe they are not Russians, they are Soviets. On the one hand I feel for them: they don’t have their own history, only Soviet history. But mind you, they are different from the Russians who come here to spend money, who go to Jurmula, the beach resort. These people are very loud, I don’t think they are very clever. Too loud and too primitive.’

She thinks for a moment again.

‘It was a cruel system. In the 1930s the Soviets killed the cleverest people, killed the country’s intelligence. So our best ancestors, also in Estonia and Lithuania, died in Siberia. In a normal situation, their grandchildren would now rule Latvia. But they don’t, so one might say that it’s a second-best generation that is in charge now, and it will take a couple of generation to restore. And on top of that there’s a brain drain: a lot of intelligent people leave the country to seek their fortune somewhere else… Cup of tea?’ she asks.