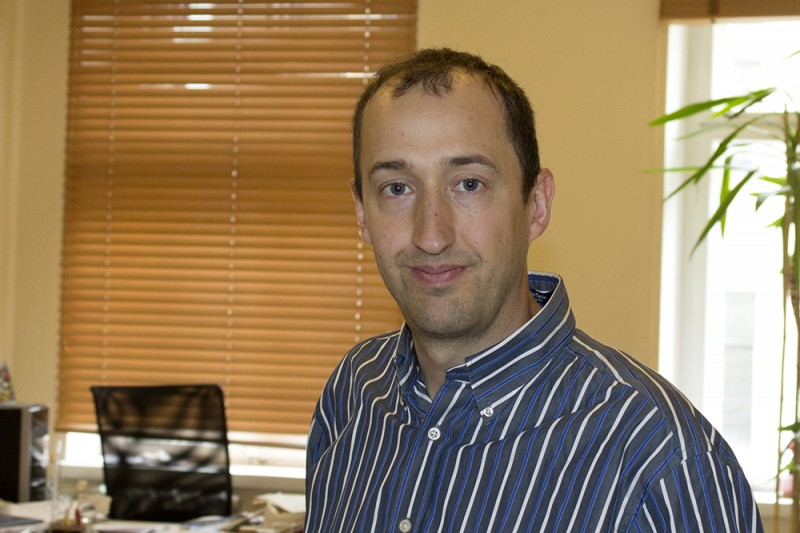 The name Claudio doesn’t sound very Latvian. And he isn’t, of course, he is Italian. ‘I fell in love with a Latvian girl, fourteen years ago,’ he says. That explains it. He is the owner of Ecodoma, an energy engineering consulting firm, specializing in renewables. He is not the founder: that is a Latvian couple, retired now, but a large picture of them in the hallway indicates that they are still a presence in the company.

Do you feel Italian, Latvian or European?

‘I feel most connected to my region, Piemonte, even before feeling Italian, as regional ties are very important in Italy. I miss the mountains and skiing,’ he says calmly after thinking for a while, immediately proving that he is not exactly a stereotypical Italian. ‘There are obviously differences in social life between the European countries, but not so dramatic. I mean, we all eat lunch and dinner. I speak to my children in Italian and my wife talks to them in Latvian, so they master both languages. Most of my colleagues address me in English, which is a habit I kept from when I was not speaking Latvian yet.’

He took over the company in 2006 after joining them six years prior. It is a very European company, by the way. ‘These energy projects are big and often implemented by a consortium of European companies, and financed with European money. I like it, because we learn from their experiences.’

What’s your opinion of the European Union?

‘Personally, I’m supportive of the European Union. If you only live in Italy and your business is mainly in Italy, you see less of what the European Union has to offer. Working in Latvia – I still have ties with Italy, but work a lot with European countries – I see big advantages.’

‘The Scandinavian countries are close by and very active in the Latvian market, so it used to be easiest to develop a network with them. Currently we see the consortium getting larger and we are now in a project with over 30 partners from all over Europe. In the last five years things have improved a lot. The deadlines are not very tight, but in the EU states the deadline is met 95% of the time. We received some aid from the EU, because we were dealing with technology at a really early stage of market development and I believe the European added value here is very important. I don’t see why a country should domesticate what has already been done in another country. Therefore I think it is much better to open a European program. This makes things very much more efficient.’

‘Nevertheless I see three points for improvement. Certainly we need better integration of the labour market, for example, through the recognition of diplomas. Diplomas you get in one country are not automatically recognized in another country. Also there are different registration procedures for opening a business in Europe. This is still organized at the country level, and I would like to see this more harmonized. And lastly, I would prefer to have a little bit more fiscal harmonization. Thus, I do not say this is the best possible Europe, but I’m certainly pro-European.’

How would you describe the entrepreneurial climate in Latvia?

‘I think it’s good. If I compare it to Italy, it’s certainly easier to open a business in Latvia. It takes only a few days to register a company and the cost of doing so is very limited. From the infrastructure point of view improvements would be welcome in terms of road transportation, railway transportation, harbour access and logistic access. But on the other hand the legal framework is good and taxation not as high as in Italy. Also, the people are well educated in languages and I think that’s quite a big advantage. Latvia is a country of a little bit more than two million people, so whatever sector you work in everyone knows everyone. Also, the institutions are very open in their communication and have a tendency to take a Nordic approach. They are often very diligent in replying to you, which is not always the case in South European countries.’ This, surely, is an understatement.

And what is their status? Is it good to be an entrepreneur here? Or do people prefer to become a civil servant?

‘The salaries they pay them are not very good… It can be difficult for ministries to retain good staff, because people would prefer to either to have their own business or to work in a good position in the private sector. And from the reputation point of view the status of an entrepreneur depends on the success you have. However, I would also say there is still a generation of people who believe that making profit is not so good and they are still occupying important positions.’

Are you a socially responsible entrepreneur?

‘Well, since we work on renewable energy it would be in sharp contrast with our mission statement if we were not socially responsible. And our staff would not like it: most of the employees have worked at this company for more than five years. If they stay so long I believe it means we provide a good work environment; they’re happy with the mission they are trying to accomplish and of course we do offer a normal level of salary to compensate for this.’

Being Italian you are used to being an outsider. What is your immigrant point of view on Latvia?

‘Well, first of all that the bureaucratic side improved dramatically when Latvia joined the European Union. Before it was a nightmare of stamps, papers, embassies and so on. Now it’s much easier to acquire many things, from getting a resident permit to a work permit to health insurance etc.’

‘I didn’t experience much difficulties integrating. I was here already with my wife so I could easily get in touch with the local people and was accepted through her. There are differences of course. Italians are known to be very open, while Latvians are seen as quite closed, the kind of people who put up a wall for people they don’t know. It is true: it takes more time to gain their trust and to become their friend. I think it plays a very important role everywhere to learn the language and Latvian is a difficult one. Very interesting, but complicated because of the conjugations and very strict grammar rules. A very un-Italian language.’