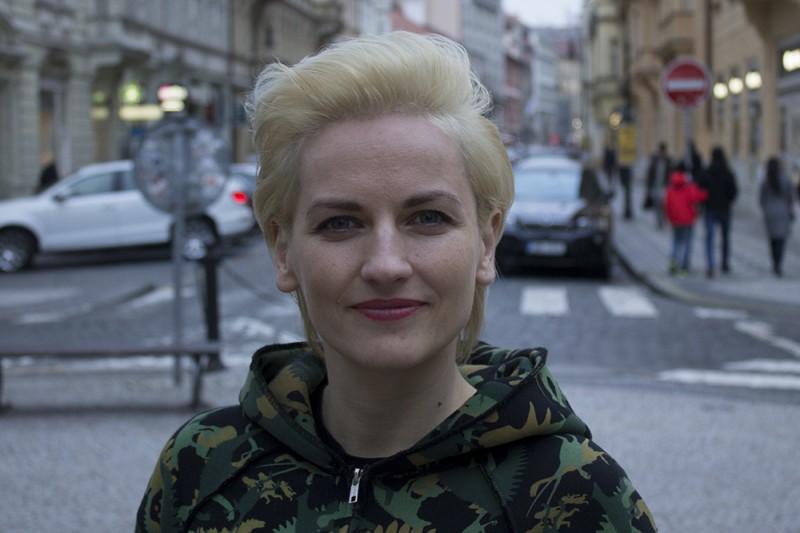 Lenny reminds me of Madonna in her True Blue days. Her platinum blonde hair forms a contrast to her dark eyebrows and her bright blue eyes. She’s dressed casually yet stylishly; exactly the kind of cool you expect to find in a TV presenter.

‘People do recognize me, but in a good way,’ Lenny explains as she causally throws her army green jacket over her chair. ‘I try to stay away from the tabloid culture, even though the paparazzi are not that bad here. They’ve become quite lazy, actually. Nowadays they wait for the celebrities to send them pictures, instead of taking them themselves. And believe me, a lot of celebrities do it!’

Who would’ve thought that the selfie would eventually signal the demise of the age-old profession of paparazzo.

Lenny Trčková is a true Jack-of-all-trades, having worked as a TV moderator, radio presenter and host of several big events. And oh yeah, she sings too. For nine years she was the host of the popular music station Óčko, becoming the face of a whole new wave – the Czech MTV generation, if you will. ‘People were asking me about where I got my clothes, my hairstyle became a trend. It was nice.’ So you were an icon? ‘Yes, I guess you could say that’, Lenny responds. She blushes a bit, her eyes betraying a sense of pride.

‘I do. Sometimes I get a discount in a restaurant, or free hair styling. It’s pleasant, but I don’t want to take advantage of it. If they offer me a favour, I always try to give something back. I like to keep both my feet firmly on the ground.’

Lenny brought along a friend, who is equally fashionable and pretty. They giggle a lot, too. When talking about Lenny’s work, about the country, about politics, about everything really. When they laugh they remind me of two high school girls, tittering during lunch break.

I have travelled to all the Eastern European cities, from Bratislava to Warsaw. Somehow I feel the same energy in those cities. Do you recognize that, are Eastern Europeans more or less the same?

‘Personally, I feel I have quite an Italian energy,’ Lenny giggles. ‘I’m very energetic. But in general, we Czechs have more in common with Russians and other Eastern Europeans. We’re not like Germans or Austrians, they’re much more precise. We’re more relaxed, easy going.’

You’re 36, right? So you were 11 when the Curtain fell. Are there any hard feelings left towards Russia?

Lenny takes a moment, weighing her answer. ‘For some reason I think there’s a difference between my perception of Russia, and that of my fellow Czech citizens. There’s definitely some sort of resentment in the Czech Republic towards the Russians, especially because of the invasion in 1968 (during the Prague Spring, ed.). And also because Russians are quite arrogant; they still expect us to speak Russian. Which, for me, is not an issue. I’ve been wanting to go to Russia and improve my knowledge of the language.’

How did you experience the change after 1989? Was it a big difference?

‘Oh yes!’ Lenny exclaims in a high-pitched voice. ‘For one, we could finally buy bananas, and toilet paper too. Before we only had rough napkins, it was terrible’, she explains, responding to my confused glance. ‘Before, everyone was wearing the same pants, those were the only ones available. After 1989, we could choose freely.’

That must have really formed who you are. I suppose you become very grateful when you’re not used to having so much luxury. You won’t easily take things for granted in life.

Actually most people, especially in the countryside, were sceptical in the beginning. They were afraid of opening up to this new life, so the appreciation came slowly over the years. Of course, there were also people who took this opportunity to start investing.’ Cowboy Capitalism. ‘Right, they made money whatever way they could, they were truly hungry for wealth.’

Fifteen years later, the Czech Republic became part of the EU. Did that change anything for you?

‘I don’t really have an affinity with the EU. I think they made many things harder for us. Before, we could make our world famous marmalade any way we wanted to. Now, the EU regulations have made this extremely difficult.’

You can’t make it the way your grandmother made it, even though nobody died of that marmalade. ‘Exactly! The EU regulations stopped these customs that we’ve had for centuries.’

Lenny looks truly dismayed, and I struggle to find the words to make her understand why these regulations are the way they are. Perhaps factual explanations aren’t compensation enough for the loss of age-old customs.

‘I can’t really judge about the EU, because I don’t watch the news and I’m not interested in politics’, Lenny says explaining her dismay. ‘It doesn’t make me feel very positive about what is happening currently. I don’t feel like there’s much transparency about politics and finance, so I’d rather focus on the projects that bring people together. Instead of the EU imposing politics on us, the demand should come from us.’

If you could do it your way, what would Europe look like?

‘Actually, I don’t like the idea of being under one roof. With that I mean the EU, not Europe as a whole. So first of all, the idea of Europe should be less linked to politics. I would unite people who can bring something to the table, to increase the cultural level of Europe. This union should start in local communities, it shouldn’t be imposed from above. I would prefer if the nations were connected in different ways than just being in the EU. We have to unite because we want to, not because we have to.’