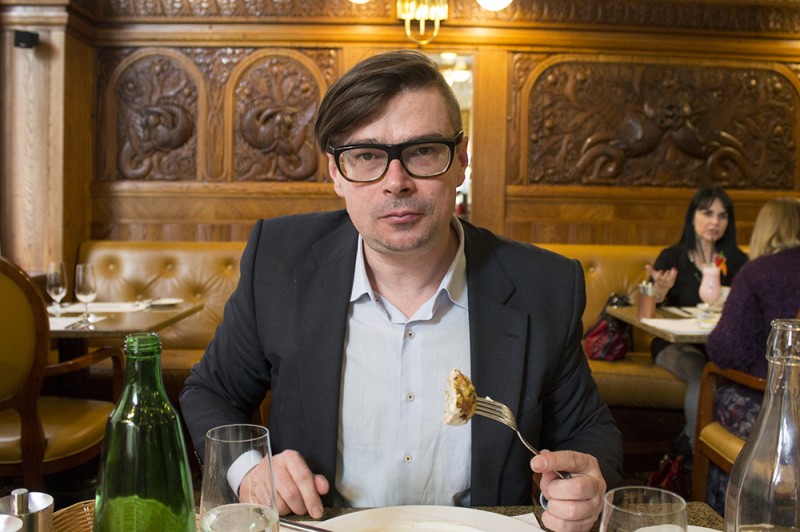 His book was a success in Germany, a bestseller in the Czech Republic, and he has co-written a animated film, which has had some success in the international art house scene. It has won European film awards. He’s also a radio-host, a presenter and he’s touring with a band, the Kafka-band. Multi-talented, like many in Prague it seems: the immigrant I interviewed is a singer, the hairdresser plays the bass in a band. Is everybody in this city artistic?

‘Look over there,’ Jaruslav says, ‘that building used to house the insurance company where Franz Kafka worked. He wrote at night. So yes, many people need to have a normal job, as it is not easy to live off artistic activities… but it is one’s own choice.’

Like in Hollywood, where girls wait tables and boys fill your tank at gas stations until they become movie stars?

And Mr Havel is also a writer.

‘It was very fortunate for our country! I was lucky to be able to write in Czech and German. I was born and raised near the German border. It is important to leave this tiny country, however pretty it is. Kafka did too; he went to Berlin. But we always return home. We are somehow attached, very connected, to the place where we were born. We don’t have that tradition of people leaving to explore the great seas.’

‘Prague is in the heart of Europe, Berlin is close, as is Vienna and even Budapest. I feel at home there, and it seems very familiar: the same stories, the same problems. We have the same heavy food…’ He cuts his dumplings. ‘It makes it difficult to move, it makes us immobile. And these old stories are still around, maybe a bit clouded, misty, but they’re there, and that fascinates me. All the wars and conflict we had in this region, it is all so tangible… And we try to deal with this sad history by joking about it, with self-irony. When you take yourself too seriously, you are suspect, people think you’re a politician.’

On to the next course, which is a soup. A heavy one, naturally.

‘I was born in the seventies and that’s fortunate, because after ’89, everything was open. Before we could only travel to the DDR, and to Hungary, but even Poland was for bidden after Solidarność. So we tried everything, when we travelled – sex, drugs. But of course at some point the party’s over… nowadays parties can’t last all night, concerts have to start early. And this generation also really believed that capitalism was a good concept, we behaved a bit nouveau riche… it took a while for us to understand that capitalism is not the same thing as democracy and that democracy is something that needs maintenance.

How did the Wende change the artistic scene?

‘If your reputation is good, it is easier to sell new things.’

‘Just a little bit. But most artists couldn’t live without it. You know, there’s quite a bit of money for the maintenance of old culture, of old buildings, but unfortunately not so much for contemporary art.’

‘The image of Prague is that of a magical old city; the most famous image is perhaps that of an empty Karlsbrucke. That image is of course deceptive as the bridge is always packed with tourists. The only time it is ever empty is on a January night at 4 AM’

What kind of reputation do artists have? How are they treated here?

‘A good country subsidises its culture, like they do in Germany.’

Does it reflect the way an artist is viewed?

‘Well, art is not created from the top down. It is created in the cafés. Stories are told –and we still think that beer is healthy; we don’t consider beer as alcohol. I drank my first at the age of 5. When I had some stomach problems, even my doctor said, “I could prescribe you some pills, but maybe two beers a day would do the trick as well” – you go there to talk, to tell stories and writers take those stories further, make new ones out of them.’

You have seen a lot of Europe. Is there such thing as being European?

‘Of course. I have had the same experience as many others have had in New York, when all of a sudden you are speaking to French or Dutch people, and you feel connected, part of the same team, It is hard to articulate exactly what that is.’

‘In the old days the menus were in two languages, in Czech and in German. Now they’re in Czech and English. I’m very happy with this European identity: we were so lost in the Eastern Block. Although here there are some anti-European noises in the cafés – we love to complain. These are good times in the history of Europe. Quiet times, even though we have just experienced Paris and Brussels. But I don’t think this will last long, do you?’

I’m assuming this is a typical example of pessimistic Czech self-irony.
Next course: Prague schinken.

‘What the Czech had been missing since WWII was other people. We were on our own for too long. We are a bit afraid of newcomers, of Muslims perhaps.’

‘The Czech Republic feels like is part of the Bundesland, part of Germany. We are very dependent on them, in many ways, so I certainly follow that news.’

What is your impression of Brussels, of the EU? Of the way it’s governed?

‘When you travel around, you can see how many roads, railways, and town halls, are being constructed with the aid of European money. So we are obviously profiting from it. In the cafés you here different stories, of course, people saying that because of EU-regulations you can’t do this or that. But it’s not true: it’s because of Czech laws, but people use Brussels as an excuse.’