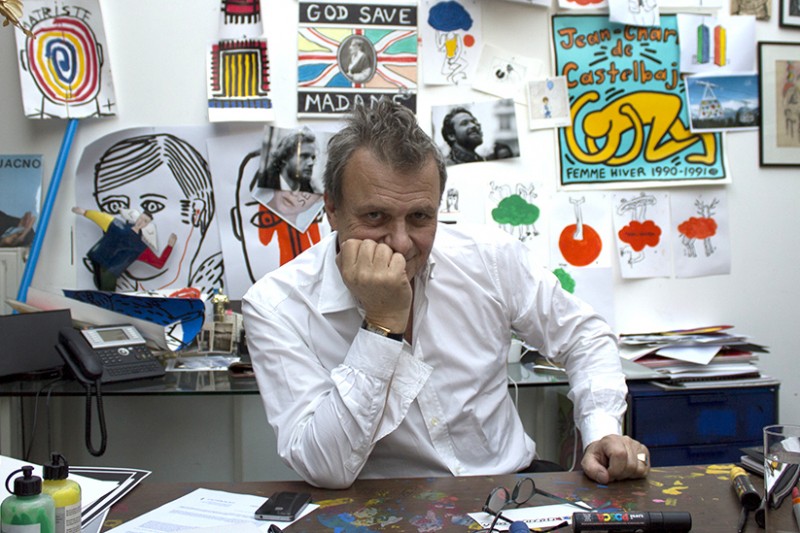 He designed a coat made of teddy bears for Madonna, a very controversial ‘glove-costume’ for Lady Gaga, Jay-Z has 150 of his jumpers, he dressed the Pope, 500 bishops and 5,000 priests in rainbow-coloured robes: Jean-Charles de Castelbajac, aka JC/DC is a spectacularly successful designer.

But you have other professions too, right?

‘Oui, I am designer, grandfather, singer in a band – well that’s not really professional… It’s a project with Mr Nô, he does the music, techno, and I do the words. I make lists, like ‘we are the mode’, or a list of mysterious persons. We did a show in Montreal for 35,000 people, 80,000 in Lille, with huge visuals and 60 models on stage. And I’m an artist, and thankfully fashion is a space where multiple disciplines come together, it’s not framed. Art is a fashion and fashion is an art. For today’s youngsters that’s very clear, they don’t see a lot of difference between Marc Jacobs and Jeff Koons. And the great thing is that Pop Art, the colourful look, is returning, like in the 70s. Although it’s a bit too karaoke, as my friend Malcom McLaren, said.’

‘Yes, because of the easy accessibility to all images, through Internet. When I was a little kid I had to use my imagination. And of course I imagined women, because I was at boarding school, and there weren’t any real girls around. It’s authenticity fighting karaoke.’

Who is going to win?

‘Karaoke. Because people have a huge lack of culture. They see the image and they grab it. I remember meeting a girl in Vienna last year when I was teaching there. She presented a skirt with an image of Jesus and Hitler. And I asked her if she knew who these two gentlemen were. She, a young Chinese, didn’t, she had found the images on Internet and just thought they were strong. You know, we get the art we deserve and now it’s desirable art. But art is meant to create the blur, the questioning; it shouldn’t be desirable, not about beauty or glamour.

His career took off in the 70s. ‘We, people like Malcolm and me, were considered rebellious.’ For those who don’t know: McLaren was very versatile too: artist, musician, producer, but possibly best known as the manager – and brains – of the Sex Pistols. ‘I did clothes for some people, like that teddy bear coat. I made nine, three for Princes of Thurn and Taxis, one for Madonna, one for LL Cool J, one for Diana Ross and the other three I don’t know, but it changed my life. Today it’s over to be rebellious. Today you have to become a virus. You have to use your creativity and spread it using today’s technology.’
JC is extremely active on social media. ‘I have 100,000 followers on Facebook, 20,000 on Twitter, but I prefer Instagram. That is why Europe seems small to me. I don’t think about Europe, I think about the world. I’m going to Seoul on Monday, Dubai on Thursday. Next week Stockholm.’

What will you do there?

‘In Dubai I will do an installation and a performance with Mr. Nô, with lots of smoke. And in Stockholm I have to paint on a dress, for the 10th anniversary of a magazine.’

And you’re also the CEO of a company, how do you do that? We are sitting on the fourth floor of JC’s office, a sort of open entresol overlooking the third floor, where girls are working behind big Apple screens.
‘Not so much, because I’m not a very good businessman. I am a visionary and I don’t like to have to apply my vision, so I need good people around me to do that.’ He’d rather not talk about business. ‘You know, you have to understand your time. We’re in a different dimension than in the 70s. Then it was extravagant, there was money, and the whole art-scene was involved: I could shoot my catalogue with Robert Mapplethorpe, and everybody wanted to work with each other. Now we are more individualists. Internet has changed so much. Before I was a flaneur, strolling along, now life flies by like an arrow.’

But JC doesn’t seem to mind, he’s adapted to modern times. Maybe he’s even made for it, as multitasking is in his nature: during our talk he posts three things on Facebook, shows me a picture of Zlatan Ibrahimovich’s wallet with more than 15 credit cards (‘pure art.’) and produces two little sketches. He does that often, also in public.

‘My style is more like Keith Haring, who used to be a friend. Or Picasso or Miro.’

I try to ask another intelligent question, but JC interrupts me: ‘Do you know Roxy Music’s Song for Europe. No? Let’s listen.’
He finds the track on Youtube, turns up the volume. The girls on the 3rd floor look up, but must have seen and heard stranger things from their boss. ‘And this one?’ He looks up a Kraftwerk song. ‘We are lucky as Europeans to be part of a long history. But we should never forget that. I learned more from history than from my personal experience. You know, I designed a beautiful flag for Europe. The Eu-rope, I called it. I don’t like the actual flag, the blue and gold. It’s not strong, it doesn’t show intention.’

He starts drawing.
‘Voilà. It’s like a rope. Eu-rope. And every part of the rope has a different colour – he takes another felt pen- For example this is the German flag, yellow, red, then the French colours. All these flags are in the twist of the rope. Maybe you want to use it for your project.’
I certainly do: it is now part of the Youropeans logo.

You left all options open. What if you had chosen, had focussed?

‘Maybe I would have become rich. And famous. Maybe I could have my name in underwear. My weakness is my enthusiasm and my inability to work out the details of everything. But I like it, the imperfect side of my work. You see, everything made with technology is perfect, there’s beauty in unicity.’