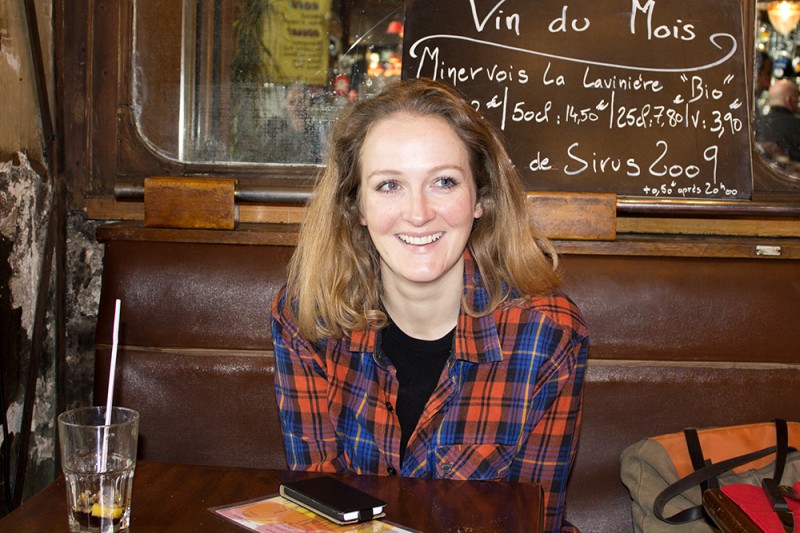 ‘No, you can’t have the soup, you really should eat should rice and apples.’
We’re meeting for lunch in Le Charbon, a famous but somewhat noisy place near Place de la République. I had told her that my stomach was a bit upset and now she dictates my order.
‘My dad is a doctor, you see.’
‘You’re the doctor’s daughter, you’re not the doctor.’
‘Yes, but I pretend to know.’
‘Just like a real doctor.’
I had read that Anouk is an actress and comedienne. ‘Are you really both?’
‘Yes, because it’s the same, in acting circles we don’t make the distinction.’
‘I thought a comedienne is someone who is funny all the time.’
‘No!’
I should have known, because most French people aren’t funny at all, though Anouk is.
‘In France people think actors are working just for cinema and tv, and comediennes for theatre, but it’s the same. And besides, I do both.’
‘What are you doing at the moment?’
‘Nothing,’ she laughs unhappily. ‘We actors are always on welfare. Waiting for a new job. Preparing for auditions. I had one last week and it was a disaster. The casting director really didn’t like me at all. What else have I done lately?’ She thinks for a moment. ‘I was on TV 10 days ago, I played a lawyer in a crime series. But honestly, it’s a nightmare. To survive as an actress you have to come from a rich family or you have to marry a rich man. Many of my friends did. And I didn’t. Not yet! But I prefer to manage by myself.’

When the waiter comes, she orders a Coke. ‘That’s good for the stomach. But only Coke without gas of course, old Coke, you must wait till it’s dead.’

‘The money is difficult. You don’t want to worry about it. And have to think about money all the time. My solution is that I started to work as a film critic for some magazines. Under a pseudonym: I can’t afford to be too critical otherwise. Last week I did a casting for a director and I had been really negative about his last film…’
‘Is the crisis extra bad for you?’
‘Budgets are worse. Our government isn’t as supportive as it should be. You know what we should do? We should completely stop everything for five years: music, museums, cinema, everything, we should stop art. And then you would see what happens. Because society needs art. But the minister of culture is shit, she doesn’t understand a thing about art, she is not an artist. A nice girl, but nobody in art takes her seriously. Who is she? Has she ever written a novel? Or taken theatre lessons? She’s a spectator while you should cross that line!’
I protest and say that maybe it’s not necessary to be an artist, but that you at least should have a strong interest in it. I don’t know if it’s necessary, but for Anouk it’s definitely not enough.
‘There’s a great new wave of French cinema makers, who are making really good low budget films, a new nouvelle vague, maybe.’
‘And do people come to see them?’ I ask.
‘Yes, maybe not my mother, but lots of people.’
‘Does your mother like your movies?’
‘She likes her daughter,’ Anouk laughs.

When I ask her about Europe, she starts by saying that she doesn’t like to talk about things she doesn’t know a lot about, but that statement is a starting point for a monologue about the EU and its benefits. ‘Europe is a great idea. It’s great to have all the different cultures and nations united. And of course it’s important to be able to travel easily, to meet different people, to welcome different people here in Paris.’
‘Do you feel European? Do you think that you are meeting your kind of people when you meet, for example, a Finnish person?’
‘No not at all, because I think every country has its own DNA. I have to admit I’m French, I’m sorry. I don’t think they are my brothers. Maybe it’s different for me: I was born in Morocco, I have lived in the US, on the Ile de la Réunion: I only arrived in Paris at 17; being away from France has made me very aware of being French.’
‘Is Europe something you talk about with your friends?’
‘No, we discuss culture, because most of my friends work in the cultural sector. But I have a German friend, whom I met at theatre school, and we had a lot of fights, my god. It was difficult for her to accept the French mentality as it was diametrically opposed to hers. For example the star system.’
‘Star system?’
‘In France we have stars. There they don’t, not as strong at least. And it makes a big difference for the system.’
‘Do you want become a star?’
‘No it would be a nightmare not to be able to go to the supermarket. I want to be on stage till I’m 80.’

She orders another Coke for me.