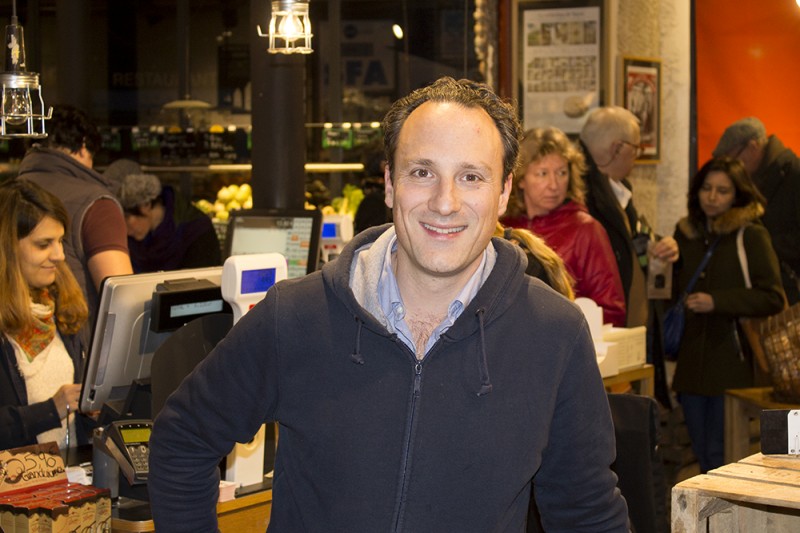 A wooden floor, wooden shelves lined with boxes of vegetables, fresh breads, hams and cheeses, big vases full of olives and nuts. Wines downstairs, and one door down the road a kitchen for ready meals. The house rules are taped to a pole in the middle of the shop: no additives, no E1150, E1223, E1333, etcetera. This is the type of shop I would love to have in my street, but then I would have to move to south Pigalle, an up and coming area several blocks away from the sleaze of Place Pigalle and its sex shops. And to have a shop like this close by, was exactly what Alexis had in mind when he started Causses.

‘After I quit Arthur Andersen, the big consultancy firm, in 2007, I first tried to take over a company that sold beds for disabled people, but I didn’t have the vocation for that. Attempt number two was a project involving energy-efficient light bulbs. That was better, but we didn’t succeed due to political issues, though it was good fun. Then I wrote this book, Arabe du coin, the ‘Arab corner store’, about that typical French phenomenon of Arab grocers and the way they create a social link in the neighbourhood. They are open till late, and their culture is more hospitable than that of the French. Everybody goes there: from homeless and drunk people to families. It’s a meeting place. It’s a club du quartier. But they’re disappearing, like many small shops: children don’t want to take over from their parents; they have gone to university or don’t like the hard work and the long hours. 10 years ago France had 15,000 cheese specialists , now there are 3,000.’ It’s obviously not the first time Alexis, 39, has told this story. His concept has received a lot of media attention since it began two years ago. ‘I wanted to open a shop, or start a brand, which would have a social function, which would improve the neighbourhood’s quality of life. And yes, it should be a shop I would want to have on the ground floor of my flat. Not an expensive delicatessen shop, where you come only once a week, but a one-stop-shop convenience store for your daily groceries. Good affordable quality.’

‘Is it affordable?’ I say. The honey and teas I bought are delicious, but not exactly cheap.

‘By Paris standards it’s good. We sell free-range eggs for 1.80 for 6, while the supermarket down the road charges 2.10. Good ham costs 17.9 euros per kilo here, 26 in the supermarket. In plastic. But I’m aware that some products are a bit more expensive than elsewhere. At Causses the margins for the basics, like ham, cheese, milk, fruits and vegetables are lower, so we compensate for that on other products.’

On my honey, I’m guessing.

Alexis is a socially responsible entrepreneur: he tries to create  social impact. A better social infrastructure is one way of doing so, as is a good human resources policy.  That’s why he trains a lot of interns, and involves his staff in things that would not normally be considered their business. Like the annual figures. ‘I try to be transparent, also because I think that motivates. This coming Thursday I will explain the figures to the whole team, so they understand the margins, the rent, and the difference between sales and net result, etcetera.’
‘Do they appreciate that?’
‘I hope so!’
I tell him the staff was friendly when I spent a half an hour mystery shopping while I waited for Alexis to arrive.  ‘They wear their Causses outfits with pride, I could see that.’
‘Yes, we are a bit rebellious, not like the others and they like that.’

He’s doing fine, the annual figures were okay; the result was break-even.
‘Is government helping you?’
‘So far, no, even though there are a lot of mechanisms that could be helpful. The social charges for entrepreneurs are high, while on the other hand government provides subsidies. It would be better to lower the taxes for all of us, instead of giving the subsidies to some, to people who have accountants and know how to work the system. But I’m not really consistent, because I applied for a program, which might provide me with 300,000 euros… ‘

Alexis opens the window of his office as he lights another cigarette. Very French, the smoking, but somehow it seems incompatible with the organic food business.  Another inconsistency.

‘Let’s talk about Europe. Does it mean anything to you?’
‘A lot. Free circulation of people; we can move without restrictions and for me that’s very important. I like to travel, that’s where I get a lot of my inspiration for Causses. I love London: Planet Organic and The Natural Kitchen are my favourite shops. What I don’t like are all these rules and regulations. There are local cultures. We are different; that is our strength, and we should not want to apply the same rules to everyone in Europe. And I don’t know if that’s due to the French or the EU government, but the rules have become far too complicated for small businesses to deal with. And they change too often. It’s a big obstacle to innovation and growth. There are many thresholds, which makes it complicated to go from 10 to 20 employees or to grow beyond 50. It all requires extra time and money to comply with  all the rules you have to cope with. I know a company that continues to employ only 49 people. They have branches all over Europe but the parent company’s staff is still 49. All the time you spend on this, you can’t spend doing business.’
‘Is the EU governed well?’
‘I honestly don’t know. The French people are very far from Europe, politically speaking. And the politicians we send to Europe aren’t the best ones, that’s a pity. The better ones prefer to stay here. France has a mixed relationship with the EU. We think Europe is important and we want to play an important role, but we will never hand too much authority to Europe. Defence, foreign affairs, and to a certain extent economic matters such as tax harmonisation, will always be French-ruled.’