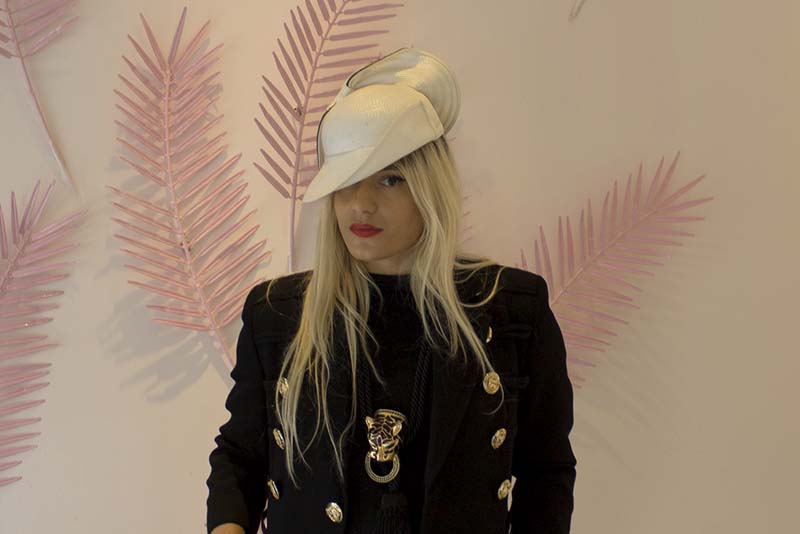 You’ll find her name in large letters on the façade of her shop in Vasilissis Freiderikis Street, Nicosia’s Bond Street. Stalo Markides. She’s a brand, or about to become one. And she is quite extravagant, almost a piece of artwork herself, as befits a designer of bags and jewellery.

‘I worked in London, for Steve Jones,’ she says.

‘I know nothing about fashion,’ I apologise.
‘Oh, he designs for Dior, he’s really famous. And I started my career at Erickson Beamon, first as a student, then as a designer, which was really, really luck and great experience. My first trial was a shoot for Vogue, with Justin Timberlake and Kate Moss. The editor had said she needed more of a kind of like rock thing, an SM and bondage thing, do you know what I mean? And I had two days to make the jewellery. I somehow managed to produce and they loved it.’ She tells me, while answering two text messages, making a cup of Nespresso and rearranging some of the earrings on the main table in her shop. ‘In my final year I specialized in leather bags and my boss helped me to set up my own brand, because I wasn’t a threat, and she set up a meeting at Harrods. The chance of a lifetime, I got to meet one of the buyers, for only five minutes. It went well, she placed the first order and my career took off. After that I was invited to Claridge’s where all the celebrities meet before a première, you know A-list actresses, like Lily Allen, and Emma Watson. I got to give them one of my designs, as a gift, because they never pay for anything,’ she says in a low voice. ‘They could choose from other designers, but they took an interest in my stuff, the celebrities really liked my things. So they informed me through their assistants that they wanted more. I explained that I was only starting out as a designer, that I couldn’t afford to give it all away, but that they were welcome to buy it – but then I heard nothing more from them. They get diamonds for free, do you know what I mean?’ She says that a lot.

She shows me her first bag.

‘You also run a shop, you are creating brand. What are you, an artist or a businesswoman?’
‘I feel like an artist, because I hate all the rest of it, having to sell it. It’s eating away my creativity, all this hassle, having to deal with all these emails, and order confirmations, this and that… do you know what I mean?’

‘How do you remain creative?’
‘Well you go through stages. It’s like a miracle, really, it comes and goes, nothing you can do, and when it comes I work quickly. I don’t have to push, because I’m in the flow, adrenaline-rushed, and I feel really amazing. But when I’m not creative I feel depressed, I’m afraid: will it ever come back?’

‘Why did you leave London?’
‘It was too expensive. I couldn’t live from the bags, I was just starting out. In the beginning you need a lot of money to make the bags, it takes an investment. I was working day and night. Cyprus was easier and cheaper, do you know what I mean?’

‘But to be honest,’ she lowers her voice again, ‘I feel trapped in Cyprus. I can’t travel. Things are starting to bother me, the mentality of the people. I also feel less appreciated than I did in London. People think I’m not one of them, I’m too different for them. Whereas in London I was promoted for being different. Here I feel I don’t want to create something different – and that’s also destroying my creativity. This crisis isn’t helping either.’

‘How do you cope with that?’
‘Business is slower. I have to do more. Make sure I meet the right people. It takes more effort. More parties in the shop. The good thing is that in many parts of the world, there isn’t a crisis: I still sell to shops in Bahrain, Japan, Dubai, Jeddah. I know their taste. I do more business outside of Europe, don’t know why.’

‘Final subject. What about the EU?’
‘It’s a good thing we joined, I guess.’ She thinks for a while. ‘But I don’t know, you know I’m not really political. On the other hand, now we have poor people, we didn’t have that before. Maybe the middle class became poor. There’s a good side too: the crisis got rid of the easy-money-people. Those people who wanted to copy my work, without education, without craftsmanship. I’m surviving because I’m good, but also because my heart is in it, there’s passion. All these copycats, they’re in it for the money.’

‘Are you European? Are you different from the people you do business with, the Bahrainis or the Japanese?’
‘Nah, at the end of the day we’re all the same. Do you know what I mean?’