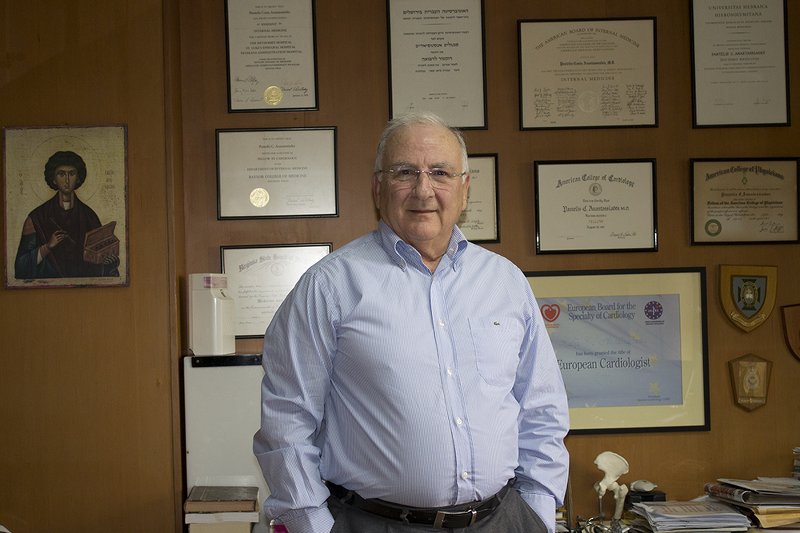 Doctors always make you wait, even if they’re doing nothing, am I right? But after a 10- minute wait, long enough to study some of the yellowed brochures about heart health, and inspect some medical machines that belong in a museum, the doctor welcomes me. He’s a cardiologist who runs a private clinic. He is about 70, not very tall, with grey hair and friendly eyes. And he is an authority: the wall of honour behind his desk is crowded with carefully framed diplomas and certificates, fellow here, associate there.

‘I was trained at Hadassah Medical School in Israel, as you know one of the most prestigious medical schools in the world.’
I didn’t, but I believe the doctor.

‘They were no medical schools in Cyprus then; we had just become independent in 1960, after a struggle against the English. We  opened our first one last year. So all Cypriot doctors are trained abroad. Most of them in Greece, others in Europe, but also a lot in the former Soviet Union, through the communist party here. These aren’t the best ones… They were educated at a university for African students, trained to operate in rural areas, it was more of a nursing education.’

‘So if you’re wise, you avoid a Soviet-trained doctor.’
‘Yes,’ the doctor says, ‘but the majority went into government service, where no background information is provided. In fact, many of them are now in the top positions of these services. For example, our current minster of health was trained in Bulgaria. That’s why our ministry of health is incompetent. We are the only country in the EU that doesn’t have a national health system.’

‘What are the consequences?’ (it sounds bad, but you never know…)
‘Everybody suffers,’ he says. ‘The government pays a lot of money. Services have dropped because of the financial crisis. More work in the hospitals, not enough for the private doctors, the well trained ones.’

‘Are your rates under pressure?’
‘Of course! We have lowered our rates since March. It’s a mess. Anyway, after Israel, I went to study in the US and when I returned in ’75, I started the clinic with two other US-trained doctors. Mind you, cardiology was in its infancy then: there was only the stethoscope. But we introduced echocardiograms, cardiac stress testing etcetera, even before the rest of Europe.’

During the interview he refers to Europe as if Cyprus wasn’t part of it, in much the same way the British do. ‘This charter behind you says you’re member of the European Association of Cardiologists.‘

‘Do you feel European?’
‘Well it’s just a title, but you know, we Cypriots grew up knowing we were European. Not Asian, like the Turks. The Muslims. The barbarians. They conquered Cyprus and Greece and oppressed us for 400 years. We always felt that we were the civilized ones, the Christians, the Europeans. So joining the EU was the most natural thing, but when the EU began setting conditions for us to come back, we went crazy: who are they to tell me I’m not European! Besides, you don’t become European, you are European.’

‘What does that mean?’
‘It’s culture. It’s everything together. Religion –Christianity -, values like freedom of speech, democracy, they’re Greek as you know: our invention. Cyprus wanted to get into the EU because they wanted to be part of an organisation of countries whose citizens think like us, behave like us, and in order to help us to get the Turks out of  Cyprus. It didn’t happen. That was a deception. The opposite is happening: the EU does everything to lure Turkey, a country that doesn’t recognise my country, one of its member states!’

The doctor is furious now, let’s hope he checks his own heart every once in a while.

‘Is there a solution?’
‘A simple one. Turkey, get out, 40,000 soldiers, get out of Cyprus! They  should all go home. There are Turkish Cypriots, who were born here but they are  only 10% of the population the rest should leave. They could go back to their houses, I could go back to mine. It’s absurd, how can we have a country divided  on the basis of race or religion, in Europe, in the 21st century?’

He laughs, rather unexpectedly. But he’s far from finished: ‘The EU should help us. Look, we just found gas in our territorial waters. It’s yours Europe, don’t let the Turks come and take it, like they are trying already. But the EU doesn’t want to help. They could have helped us when our banks were in trouble. Look, we developed a huge banking system, out of nothing, that’s what we lived on, besides tourism. Way too big for us. But instead of the EU telling us to scale down, they simply let our banks drown.’

On March 25 2013 the government decided to freeze all deposits of over 100,000 Euros in the biggest commercial banks, a move known as a haircut.

‘I lost all my money too,’ the doctor says, ‘all my savings from 40 years of hard work. It disappeared overnight. First I lost my family house to the Turks when they occupied my home village, then I lost all my money. Is this Europe? We suspect that it’s a punishment from Europe. We think they want to makes us kneel down and agree to the demands of Turkey so that we give half of our country to them.’

In the weeks after the haircut the world braced for mass protests. The international press gathered, ready to record riots, but instead the Cypriots remained remarkably calm, standing in line at their banks, waiting for what would happen next.

‘We have suffered a lot. We’ve been in concentration camps run by the British; we‘ve had the Turkish invasion. We’ve learnt from it. We don’t panic. We are stoic people, but we expect things to be fair. And we don’t blame individual countries, it’s the establishment. It’s the people in Brussels, paid by us, they’re civil servants. They don’t judge correctly.’

‘I understand doctor,’ I say.
He smiles again. ‘I’m a typical Cypriot,’ he says, ‘not an extremist.’