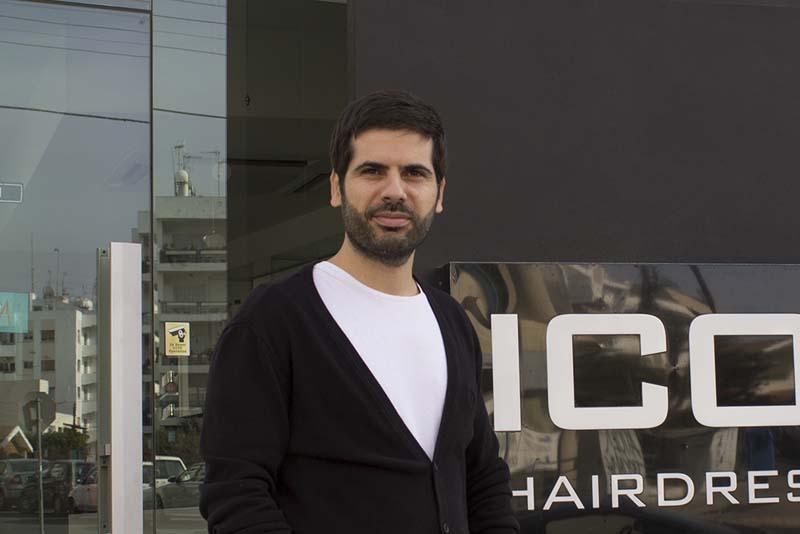 ‘This is the take-home section. He points to a range of products, shampoos. We don’t want to call it shop, that sounds so harsh.’ He shows me around his shop, after closing time. ‘This is the shampooing  area – a room with very low lighting and candles. You’re not allowed to talk or use your phone. And here, upstairs, this is styling. The colour bar is over there, where we do all the colouring techniques and services. The concept is that it really is a bar, people stand here and watch the specialists mix and work on the colours. Like going to a sushi-bar, you understand?’

‘Are you a businessman or a hairdresser?’
‘A hairdresser first, but I have learned to become a businessman. I was trained by Vidal Sassoon in London, the best academy in the world. And the business skills I learned at the Paul Mitchell Academy, also a famous hairdresser, but his finance and marketing courses are great. They cost me a lot of money, all these courses, but it’s been worth it. As a result I modernised our shop, and shifted the emphasis to colouring and styling instead of blow-dry’s. They can do that at home. In Cyprus things happen later than in the rest of Europe, you see. Becoming a hairdresser was never my plan. I wanted to be an architect, but I waited too long to make up my mind in school.’

‘Now you’re a hair architect’!
‘Yes, exactly,’ he says. ‘When I finished my two-year-service in the army, my brother invited me to try. At first I wasn’t very interested, but that changed when I saw an interview with Vidal Sassoon. I realised that it could be a really interesting profession. Now it’s a job and a hobby. You know, some people cut hair just to make a living, but the passionate ones are really good. I can tell the difference in their work immediately. And you can make a lot of money. Some of them are multimillionaires. I spoke to several, on the Paul Mitchell courses.’

‘What’s your goal?’
Another salon and an academy. I would like to train people the way I was trained. But it won’t be easy.’

‘Why?’
‘Because Cyprus is quite conservative. The people still like thick hair, curly, with highlights. The island’s not ready for it.’

‘What’s it like, running a business in Cyprus?’
‘The government doesn’t help at all. The only thing it does is raise taxes. They make the process of hiring and firing staff extremely difficult. You know, my family are religious people, we are trying to be good employers, we treat our people right, we’re honest and we pay very well. We haven’t lowered the salaries the past two years, during the crisis.

But the government should do more in return. They could offer free seminars, could help to improve productivity.’ George is angry, he even raises his voice somewhat.

‘Is the crisis affecting your business?’
We doubled in size over the past 5 years. But compared to last year we’re 12% down. Not a tragedy, we can handle that. I managed keep the clients from running to cheaper salons.

‘How?’
With a bonus card. A loyalty programme, it worked. Clients love it. Instead of lowering the price, we wanted to offer more service. And every month we make a comic book.’

He shows me a magazine, the cover styled like a Mondrian-painting.

‘Hairdressers talk a lot with their customers. Do you talk about the crisis with them?’
‘We talk about everything except that. I’ve told my staff that it’s  taboo. Some of my clients have lost millions. They come here to feel special, to be pampered, to relax.’

‘How is the government doing in general? Are they handling the crisis well?’
‘Better than the previous government. We feel safer now, safer than Greece. Maybe things will get slightly worse, but it won’t collapse. The month of the haircut, March ’13, the bail-out haircut, was scary.’

‘The haircut: all bank deposits over 100,000 Euros were frozen. How appropriate for a Cypriot hairdresser!’
‘Yes, a journalist from Reuters came to the shop, because we’re just around the corner from the national bank and he wanted to interview a hairdresser about the haircut…’

‘What about the future?’
‘Not bright for everybody. You are starting to see a separation between skilled people and people who were just taking advantage, in the heyday, when the money was all over the place. It was a crazy situation, people made money for doing nothing, and spent it in crazy ways. Farmers became stockbrokers or hotel owners.  It all went too fast. And this crisis, we had it coming. We’ve been very irrational.’

‘Who are we?’
‘Not the normal people, but the people in the banks. ‘

‘But they didn’t force people to borrow money…’
‘Well, you know what happened? People asked the bank for a loan, let’s say 60,000 for a new car. Then the bank would say: why don’t you borrow 100,000? And you’re tempted, it was too difficult to resist. And economy was booming, it couldn’t collapse, but it did…’

What about the EU? I hear a lot of Cypriot criticism about the way they dealt with your crisis.
‘I’m not an economist, but it was a bit harsh. But on the other hand, we don’t know if our politicians have been honest with us, maybe there had been clear signals and warnings from the EU, we don’t know. I don’t find the Troijka monsters that came from Brussels to destroy our country, even though a lot of Cypriots don’t agree with me.’

‘Are things moving in the right direction? All these new countries for example?’
‘It depends. Just as long as it’s controllable it’s perfect, but that’s not the case now, I think. As a concept I think the European Dream is great: to connect as many nations and countries as possible and avoid wars and hunger. But the bigger economies like Germany and France are absorbing more and more the money. They’re helping us, but indirectly it’s going back to them, through interest on the loans, through business. The strong ones become stronger, the weak weaker.’

‘What about potential member 29? Turkey?’
‘They shouldn’t enter. I’m not talking as a Cypriot, but as a European citizen. They have a long way to go in terms of human rights, the treatment of women, political prisoners, and journalists, and the position of the army. They are constantly threatening us, not respecting our borders. I think that a country that behaves like that shouldn’t be part of a union that is designed to maintain peace. But on the other hand, if they manage to change, why not?’

‘Can the conflict be solved?’
‘I think that if they let Turkish Cypriots talk to Greek-Cypriots, it can be done. On their own. No armies. If the politicians really want to, but I’m not sure they’re telling us the full story…’